After a four day wait Britain's Duke and Duchess of Cambridge have announced that they have named their third child Louis Arthur Charles.

The announcement was made in a tweet from Kensington Palace, the Cambridges' official residence, that said: "The Duke and Duchess of Cambridge are delighted to announce that they have named their son Louis Arthur Charles.

The Duke and Duchess of Cambridge are delighted to announce that they have named their son Louis Arthur Charles.

The baby will be known as His Royal Highness Prince Louis of Cambridge. pic.twitter.com/4DUwsLv5JQ

The couple's third child, who was born on Monday April 23 at 11.01am, weighing 8lb 7oz, will be known as Prince Louis, Kensington Palace announced after a four-day wait.

The baby is fifth in line to the throne and the Queen and the Duke of Edinburgh's sixth great-grandchild.

William and Kate's choice came as a surprise because the name is already one of Prince George's middle names.

Four-year-old George was christened George Alexander Louis in 2013, while Charlotte, who turns three next week, was named Charlotte Elizabeth Diana in 2015.

Bookmakers had Arthur as the favourite for some time, with James and Philip also popular.

The middle name Charles is a tribute to the Duke's father, the Prince of Wales.

William joked on Monday that he had "thrice the worry" now as he took the prince home to Kensington Palace, after the baby's debut on the steps of the exclusive Lindo Wing maternity unit in London.

The Duchess is on maternity leave, but is expected to attend Prince Harry and Meghan Markle's high-profile wedding at Windsor Castle on May 19. 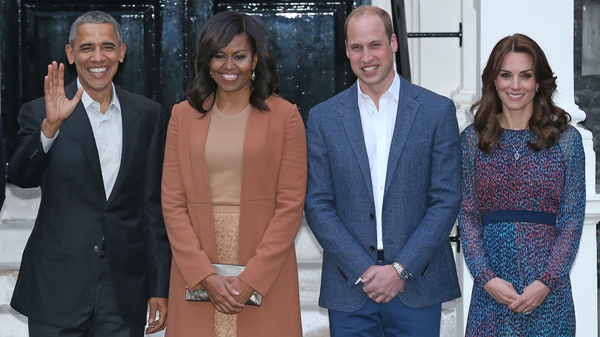