Talk show host Jimmy Kimmel has said he wasn't laughing at Fergie's now-infamous rendition of the American national anthem, despite being caught on camera with a smile on his face during her performance on Sunday night.

Fergie's sultry take on The Star Spangled Banner at the National Basketball Association's (NBA) All-Star Game at the Staples Center in Los Angeles caused a social media meltdown, with face-in-the-crowd Kimmel caught up in the story.

After much speculation that he was enjoying Fergie's performance for all the wrong reasons, the presenter addressed the 'issue' on his show on Tuesday night.

"I feel like I need to address something that happened Sunday night at the NBA All-Star Game," he said.

"Somehow, I became a part of a national anthem fiasco."

"Fergie, the singer from the Black Eyed Peas, gave an unusually sultry version of our national anthem. And I wound up in the middle of it," Kimmel continued.

"I just want to say, the reason I was smiling is because I love the national anthem so much. That's the face I make when I really love a song."

"That was some arrangement, though," Kimmel joked.

"In hindsight, trying to work in the words 'my humps, my humps, my lovely lady lumps' may have been a mistake." 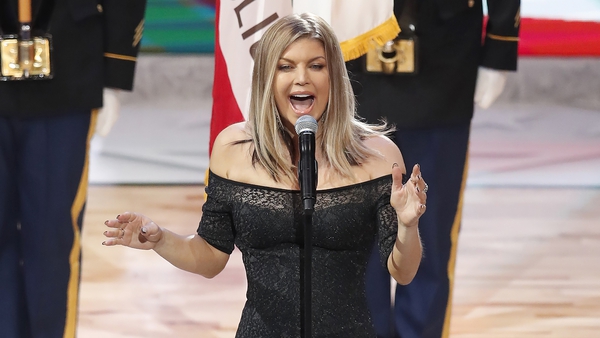