All tickets for the Dublin and Belfast legs of U2’s eXPERIENCE + iNNOCENCE Tour sold out this morning with fans braving the cold and queuing overnight. A second Belfast date on October 28 has now been added with tickets going on sale on February 9.

It’s a happy Friday for many U2 fans around the country who have managed to secure tickets to one of the band’s shows at the 3Arena in Dublin or the SSE Area in Belfast.

And in case you didn't manage to snag one, you have one more chance to see Bono and lads in Ireland as a second date has been announced for the SSE Arena in Belfasy on October 28.

Smiles this morning at @3arenadublin with fans securing their @U2 tickets for eXPERIENCE + iNNOCENCE Tour #U2 pic.twitter.com/qPaZNT9fsk

Speaking at the 3Arena this morning Tamara de Paula from Brazil, who was among the first fans who bought tickets in person, said: "I should be lying on a beach right now, I have missed my holiday to get a ticket. I am really excited."

Second in line was Gregory Fitzsimons, who secured tickets for his 79th U2 show. He said: "I am also going to the first show in Tulsa. I’ve seen them play in LA, Boston, Connecticut. I even flew home early from honeymoon so I could fly out to Madison Square Garden. My wife still hasn’t forgiven me!"

Another fan Patricia van der Velde added: "I live in Ireland because of U2, I moved here because of them because I am such a fan. My husband is even from Cedarwood Road!!

Dave Griffith from Terenure securing his ticket. He was first in the queue since 8pm last night! #U2SongsOfExperience @U2 pic.twitter.com/Xv8IMrw44o

Fans have been venting their frustration on social media as almost immediately after tickets for all European dates of the tour went on sale on 9am, hundreds of tickets for dates in Ireland, Germany, Portugal, France and the UK began appearing on Ticketmaster’s sister website Seatwave for up to €400.

By 11am this morning, there were no tickets for any of the Irish dates available on Seatwave.

Our first few @U2 customers.
Queueing from 1am this morning! #dedicatedfans pic.twitter.com/zjPp88xxHM

Seatwave, charges a fee on ticket sales and sellers are allowed to set their own price.

Speaking recently about legislation that has been introduced in a bid to tackle the reselling of tickets at inflated prices Fine Gael TD Noel Rock said: "Today’s outrageous cornering of the market by touts whose only goal is to gouge hard-working fans is an absolute disgrace and shows clearly the problem we have here."

"This is now happening on a weekly basis with concerts big and small, as well as larger sporting events," he said.

"This situation cannot continue. The ticketing industry cannot be relied upon to regulate itself."

U2 Tickets Hit The Square in Tallaght! pic.twitter.com/1VwtYZPU9n

Last year Ed Sheeran made moves to combat the problem, recalling 10,000 tickets that were up for sale on an unofficial ticketing site for inflated prices, and put them back up for sale on his own website for the original sale price. 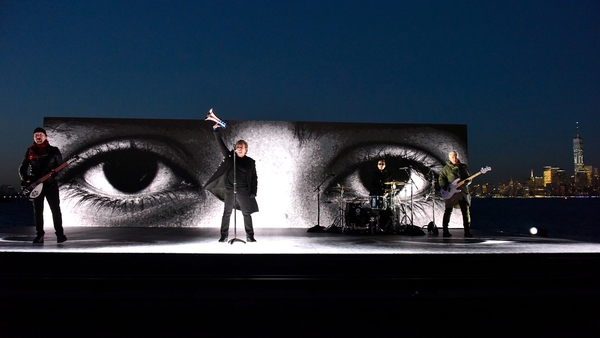 U2 rock Statue of Liberty with Grammy performance