Actor James Franco has denied sexual misconduct allegations made against him on social media after his Golden Globes win on Sunday night, describing them as "not accurate".

The director and star of The Disaster Artist was a guest on The Late Show on US television on Tuesday night, where host Stephen Colbert asked Franco about the allegations and the Time's Up badge that he wore at the Golden Globes in support of the campaign against sexual abuse and harassment.

"You got criticised for wearing that," said Colbert. "Do you know why, and do you have a response, anything you want to say about that criticism?"

"First, I want to say I wore it because I do support it [Time's Up]," Franco replied. "Look, I was so excited to win but being in that room that night was incredible. It was powerful and there were incredible voices and I support it. I support change."

"There were some things on Twitter. I haven't read them. I've heard about them," he continued, before moving on to a series of vague, now-deleted tweets from actor Ally Sheedy in which he was referenced.

"The others…In my life, I pride myself on taking responsibility for things that I've done. I have to do that to maintain my wellbeing. I do it whenever I know that there's something wrong that needs to be changed. I make it a point to do it.

"The things that I heard were on Twitter are not accurate, but I completely support people coming out and being able to have a voice because they didn't have a voice for so long. So I don't want to shut them down in any way, and I think it's a good thing and I support it."

"Do you have any idea what the answer might be to come to some sense of what the truth is, so there can be some sort of reconciliation between people who clearly have different views of things? It's a big question, but I don't know how to leave or further this discussion."

"The way I live my life, I can't live if there's restitution to be made," replied Franco. "I will make it. So If I've done something wrong, I will fix it. I have to. I mean, I think that's how that works. I don't know what else to do.

"As far as the bigger issues [of] how we do it, I really don't have the answers. I think the point of this whole thing is that we listen. There were incredible people talking that night, they had a lot to say. And I'm here to listen and learn and change my perspective where it's off. I'm completely willing and want to." 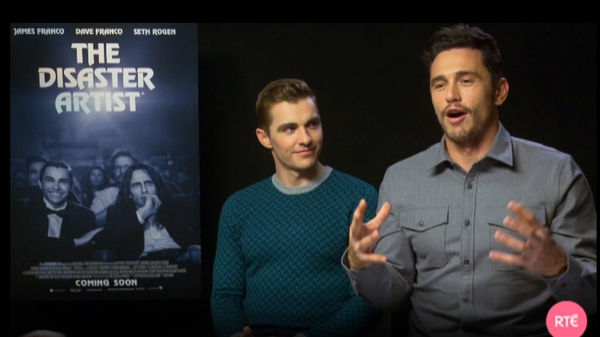 The Franco brothers turn disaster to art in new movie