Derry Girls, featuring Tommy Tiernan, is a brand new comedy following teenager Erin, who's growing up in 1990s Northern Ireland and living her life against the backdrop of the conflict.

The six-part series, which kicks-off on January 4, is written by Lisa McGee and mirrors her own stories of growing up in the Northern Ireland city in the early 90s.

The show focuses on Erin (Saoirse Jackson) and her friends are used to seeing their country on the nightly news and speaking in acronyms (The IRA, The UDA, The RUC).

It’s a time of armed police in armoured Land Rovers and British Army check points. But it’s also the time of Murder She Wrote, The Cranberries, MJ and Lisa Marie, Doc Martens, bomber jackets, The X Files, Nirvana and Wayne’s World. And while The Troubles may hang over her home town, Erin has troubles of her own.

Tommy Tiernan stars as Gerry Quinn a "southerner, married into a very strong northern household who, the comedian says was "hated" by his father-in-law.

"I am hated by my father-in-law who transfers some of the abandonment issues on to me as a 'soft southerner' meaning that the life of the southern Irish hasn’t been as traumatic as the northern Irish, therefore they are a lot tougher so I have supposedly come from this soft southern background into this wild northern Irish family."

Ahead of the series premiere Channel 4 has issued a handy Derry Girls glossary for viewers who may not be up to speed with the local vernacular.

Check it out below:

Brit: A member of the British armed forces

Broke to the bone: Hugely embarrassed

Catch yourself on: "Don’t be so ridiculous"

Cack attack: A state of extreme nervousness "I’m having a complete Cack attack"

Critter: Someone who evokes sympathy e.g. "You poor Critter"

Dose: An unbearable human being

Hi: A sound placed at the end of almost any sentence for no particularly reason e.g. "No problem hi"

Head melter: Someone who causes you mental distress

Mind: "Do you remember?"

Mouth: Someone prone to exaggeration

No Bother: "That’s no trouble whatsoever"

Saunter: "Be on your way"

Shite the tights: Someone of a nervous disposition

Slabber: A show off

Wain: A child or young person

Wise up: "Don’t be so stupid and/or immature" 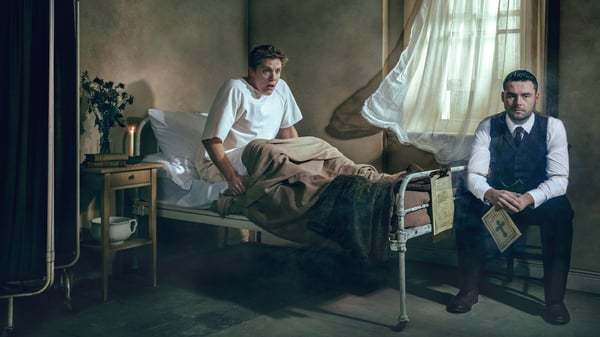 Emmerdale's Robron are making a comeback for Christmas