This year's Late Late Toy Show reminded us that the most important thing about Christmas is family when Sergeant Graham Burke was reunited with his wife and kids live on air.

Adam and Kayla were taking part in a segment with Toy Show host Ryan Tubridy showcasing their limbo skills and a number of other toys, before being brought over to a large, wrapped box.

Tubs told them that there was a surprise inside for them, before peeling open the wrapping to reveal their dad inside, in a moment that will go down in Toy Show history.

Graham is currently completing his sixth tour of duty with the Irish Defense Forces in Mali. He last saw his children on September 14, before his current tour began.

When Graham heard that The Late Late Toy Show were looking to reunite a soldier with their family he jumped at the chance.

For more highlights from this year's Toy Show, click here, and for a recap on all of the action as it happen, click here.

If you missed the Toy Show, you can catch up on the RTÉ Player or If you have young children who missed last night's showing Its on RTÉ One today at 3.25pm. 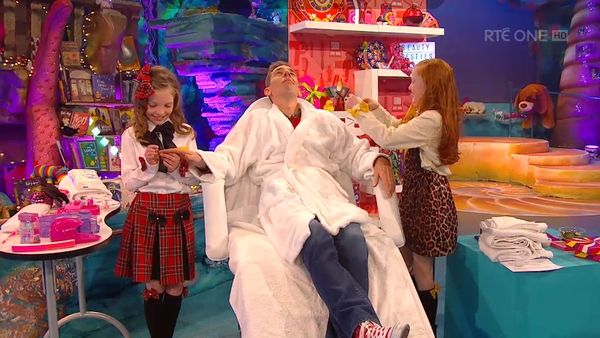