As always, The Late Late Toy Show has provided us with some classic telly moments - relive the best bits here.

For a recap on the Toy Show as it happened, click here.

Life is the bubbles!

How's that for an opener! From Ryan Tubridy's crabster costume ("part crab, part lobster and part hipster", the man himself explained), to his impressive Dad dancing moves, to the amazing performers and magical sea-themed set.

Tadgh Purcell made his entrance in the Batmobile and somehow ended up being spun around the floor by Tubs via a Batman stretch armstrong - an instant Toy Show classic!

Viewers at home - and the Late Late Show team - were quick to tip Tadhg as a future host of the show, and we can see why!

From his matter-of-fact instructions on how to properly feed cattle, to his explanations of how the mart works, Kyle Carty was all sorts of brilliant in his farm toy segment, but the best part has to be when Tubs pretended to be a cow - you'd only see the likes on the Toy Show.

Star Wars fans were given a special treat in the form of the bagpipes on this year's Toy Show. Alex Hughes has left us all majorly impressed!

Alex Hughes brought you a version of the #StarWars Theme like you've never heard it before ... #LateLateToyShow pic.twitter.com/QKPlBQiSFj

Mia gets a Christmas surprise

The Toy Show isn't all laughs, malfunctioning toys and Tubs acting the maggot; it's also full of heart. The moment Mia Farrell was surprised with a trip to Florida for her entire family was just beautiful - pass us the tissues!

Tubs took some time to relax during the show, paying a visit to Brooke Gray and Amber Ryan's salon. These girls need their own show - the sass was just brilliant! Now that he has his nails done, Tubs is all set for the after party... stunnin'

The best surprise EVER

Brother and sister Adam and Kayla got the best surprise of all this Toy Show as they were reunited with their dad who is based in Mali with the Defense Forces. We just can't deal, and neither could Tubs!

A lesson on evolution

"It's about dinosaurs" - we love the book section and Henry McLoughlin's explanation of the Dinopedia and evolution was just fantastic. His monkey impression at the end was also gold!

For more highlights from this year's Toy Show, click here, and for a recap on all of the action as it happen, click here.

If you missed the Toy Show, you can catch up on the RTÉ Player.

If you want to watch it on television today - tune in at 3.25pm on RTÉ One. 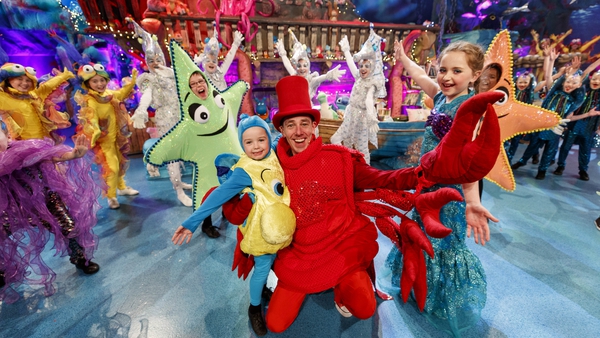