Lennon and Ono's son Sean broke the news of the new songwriting credit on his Instagram account.

He revealed that at a ceremony in the US to honour Imagine with the National Music Publishers' Association's (NMPA) Centennial Song Award, his mother was awarded a credit for the 1971 hit.

The NMPA explained the move with a clip of an interview where John Lennon said Imagine "should be credited as a Lennon-Ono song".

"A lot of it - the lyric and the concept - came from Yoko," said the former Beatle, who was later murdered by gunman Mark Chapman in December 1980.

"But those days I was a bit more selfish, a bit more macho, and I sort of omitted to mention her contribution.

"But it was right out of Grapefruit, her book. There's a whole pile of pieces about 'Imagine this' and 'Imagine that'."

Sharing a photo of his mother at the event alongside singer Patti Smith and her daughter Jesse, Sean Lennon wrote: "Proudest day of my life: The National Music Publishers Association just gave the centennial (song of the century) award to Imagine, but WAIT! Surprise!

"They played an audio interview of my father saying (approximately) 'Imagine should've been credited as a Lennon/Ono song, if it had been anyone other than my wife I would've given them credit'.

"Cut to: my mother welling up in tears, and then Patti and Jesse Smith played Imagine! Patience is a virtue! (PS then they officially declared Imagine to be a Lennon/Ono song!)"

According to Variety magazine, Ono said that a current illness had made her appreciate the emotional song all the more and added that the moment marked "the best time of my life". 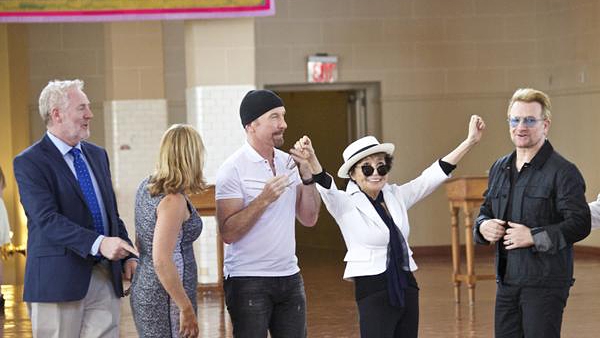