Adele joined a vigil held at the site of the Grenfell Tower tragedy in London on Wednesday night, offering comfort and support to those affected by the fire.

At least 17 people were killed in the fire that destroyed the tower block in north Kensington where flames could still be seen burning more than a day on from the disaster.

Adele was joined by her husband Simon Konecki at the vigil, where she made a low-key appearance, offering comfort to those affected.

Adele was spotted at Grenfell Tower today offering her support to everyone affected by the tragedy. pic.twitter.com/wxU7T46dkH

Twitter user @AdeleUnion said the Hello hitmaker was "asking if anyone needs help that was affected by the fire" adding that she was "going around and hugging everyone she could to comfort them."

Many celebrities including Dara O'Briain, Jeremy Clarkson and Rita Ora, have been urging fans to show their support for the victims of the tragedy, posting locations of drop-off points for urgently-needed clothes and toiletries.

Shocked and devastated to hear this terrible news. My heart goes out to everyone affected by this horrific tragedy in west London pic.twitter.com/0pqT6WZBvU

Lily Allen, who lives near the apartment block, offered those affected "a bed or a lift or tea", telling them to tweet her and she would help them.

If anyone need a bed or a lift, or tea  tweet me and I'll follow back.  #NorthKensington

Jamie Oliver pledged to give free food to those that have lost their homes in his nearby restaurant, and urged hotels to take "the same approach." 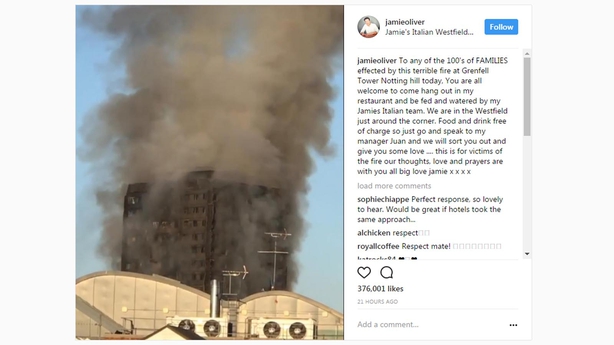