Stars of the stage and screen joined family and friends to pay tribute to Ronnie Corbett at a moving service at Westminster Abbey in London on Wednesday.

Stephen Fry, Joanna Lumley and Barbara Windsor were among those who attended the memorial to celebrate the life and career of the entertainer. 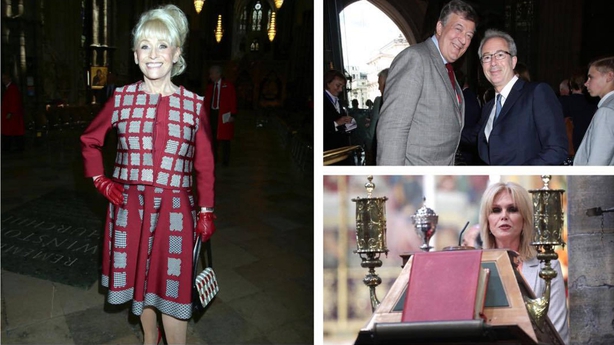 Corbett's chair and four candles - famous from his sketch show The Two Ronnies - were placed at the front of Westminster Abbey.

In a touching tribute, Rob Brydon said it was "truly one of the great pleasures" of his life to become friends with "this remarkable man".

He added: "To walk down the street with Ronnie Corbett was to witness something really rather wonderful.

"Faces would light up with joy like shop windows when they saw him. Here was that man, that friend, who had entertained us for so long."

Lumley, who gave a Bible reading, said Corbett "would be absolutely delighted and amazed" at the service of thanksgiving.

"The Two Ronnies were as good as it gets," she said. "They were at the top of the tree. They always left me in stitches and gasps of admiration."

Bruce Forsyth, who was a close friend of Corbett, was notably absent from the memorial, but was represented by wife, Wilnelia Forsyth.