Miley Cyrus is back and returning to her country-music roots with a brand new song in which she pays homage to her fiance Liam Hemsworth.

While 24-year-old Cyrus' betrothed does not feature in the video he is subtly hinted at in her romantic lyrics, the way video is shot, and in several flashes of her diamond engagement ring.

Cyrus and Hemsworth began dating in 2010, became engaged in 2012, but parted ways a year later. Cyrus soon became a notable figure on the party scene and spoke openly about her drug use and saucy antics, however the star has calmed down since she reunited with Hemsworth last year.

In the song, Cyrus sings that she never thought three years ago - referring to when they called off their engagement in 2013 - that she would have been writing a song about him, "But here I am, next to you".

Cyrus, recently told Billboard that she wanted to talk about her on-off relationship on her own terms through her music.

She said: "People are going to talk about me if I come out of a restaurant with Liam. So why not put the power back in my relationship and say, 'This is how I feel'".

Cyrus, who has ditched the PVC bikinis and twerking, also revealed that she wanted to reach across the political divide in the US, saying: "I like talking to people that don't agree with me, but I don't think I can do that in an aggressive way.

"I don't think those people are going to listen to me when I'm sitting there in nipple pasties, you know?"

And she added: "I haven't smoked weed in three weeks, which is the longest I've ever (gone without it). I'm not doing drugs, I'm not drinking, I'm completely clean right now! That was just something that I wanted to do."

Fans are thrilled with her new song, already sending it to the top of the charts in the US. 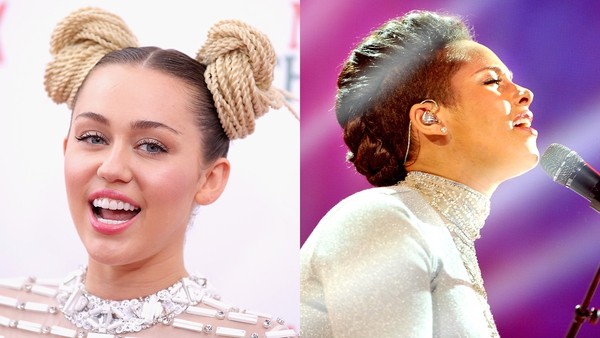 Cyrus and Keys join The Voice US in star shake-up