Ed Sheeran has said he "lost himself" earlier in his career and revealed his cousin threatened to quit working on his tour if he did not rein in his wild lifestyle.

The chart-topping star, whose album +:: (Divide) has spent its ninth week at number one in Ireland, has frequently used his music to sing about drinking and drug use.

He told BBC Radio 4's Desert Island Discs on Sunday morning that he initially found it difficult to be alone in the spotlight, saying: "Before you get into it (fame) everyone warns you: 'This will happen, this will happen'.

He continued: "I don't think I did deal very well with it. It's a weird thing, playing a venue like Wembley Stadium with 87,000 people and walking off to sit in a dressing room with nothing but an air conditioning sound, you don't really know how to come down from there.

"At Wembley I had my friends and family but on tour I will admit I did lose myself for a bit. You can't really not go mental in that setting but I quickly realised my school mates had always been the constant thread of sanity."

Asked by Desert Island Discs host Kirsty Young how losing himself manifested itself, he said: "All of the check points that are on the list."

"But I have about 12 really close school mates that have been in the same group since we were about 11 and that has been a constant thread of sanity so now I employ four of them to work on my tour."

When Young asked if it was someone telling him to "stop it with the girls and the drugs and the booze", Sheeran, 26, replied: "Yeah it was my cousin actually, who worked on the tour and who basically said he was leaving if it didn't calm down."

Sheeran also admitted that he found the critical reviews of his first album + very hard to take, saying: "All the reviews came in before the album was on sale and they were all one or two stars saying 'this is absolute dross'.

"They kind of crushed me because I wanted to be a successful musician for my whole career and all the papers I read reviews in had slated it, so I got really down for the week.

"My main goal for my career was to do 100,000 albums and play Shepherd's Bush and the week the album came out it sold 100,000 and I played Shepherd's Bush, and I was there looking at these bad reviews and had just achieved my dream within a week and was thinking I shouldn't focus on what other people think of me."

26-year-old Sheeran said he is now in a "wonderful place", adding: "I'm loving it. I'm now at an age where I get taken seriously musically, which has always been a burden on my shoulders.

"Now if you don't like it, you still have to kind of respect that other people do.

"When I first said I want to play Wembley Stadium, everyone was like: 'You're never going to do that', but now I've done that and no-one laughs at my dreams any more."

On Sunday morning's show, Sheeran said these were the songs he'd like to have with him if he was stranded on a desert island:

Layla - Derek and the Dominos

They Won’t Go When I Go - Stevie Wonder 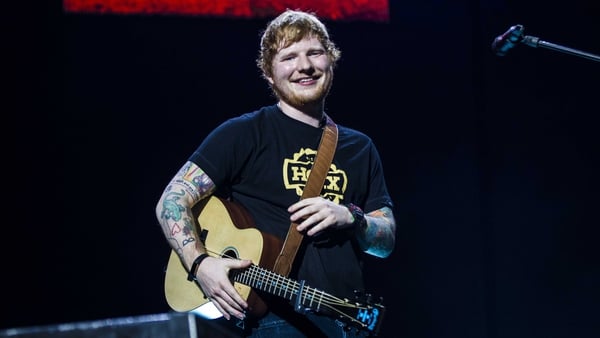