MMA star Conor McGregor has tweeted the first picture of his new baby boy with partner Dee Devlin and it's pretty awww-some.

McGregor said: "Dee and Junior are doing great everyone! Thank you for all the kind words, I am one proud and blessed Daddy."

The new arrival stepped into the ring of life at around 8.00pm on Friday night in McGregor's native Dublin and McGregor and Devlin, who been together for eight years, have named him Conor Jack McGregor.

He weighed in at 8lb 14oz in the Coombe Maternity Hospital and Conor's father, Tony, confirmed the news of the birth onn Saturday afternoon and said both mum and baby are doing well.

Dee and Junior are doing great everyone! Thank you for all the kind words, I am one proud and blessed Daddy ❤️ pic.twitter.com/3JqMpLvs9d

"There’s great news for the McGregor’s and the Devlins," he told the Irish Mirror. "Baby Conor Jack McGregor was delivered last night at 8pm in the Coombe Hospital. He came in at eight pounds 14 ounces. The whole family are absolutely delighted.

"We’ve experienced this recently with our eldest daughter and there’s no better feeling in the world than being a grandparent. The parents are absolutely over the moon and everyone is healthy."

The ever social media savvy McGregor Snr has already set up an instagram account for the new arrival with fellow Dubliner Dee (28) and the newborn had 1,500 Instagram followers by Saturday afternoon, some way off his dad's 12.6m followers and his mum's 468k.

Following his victory over Eddie Alvarez last November in New York, 28-year-old UFC star McGregor said that he and Devlin were expecting a child and that he would be taking a break from the octagon.

McGregor, who recently made Time magazine's list of the world's most influential people, has previously said he was "crapping his jocks" at the prospect of parenthood.

Just two weeks ago, Dee posted a picture of her expecting self. 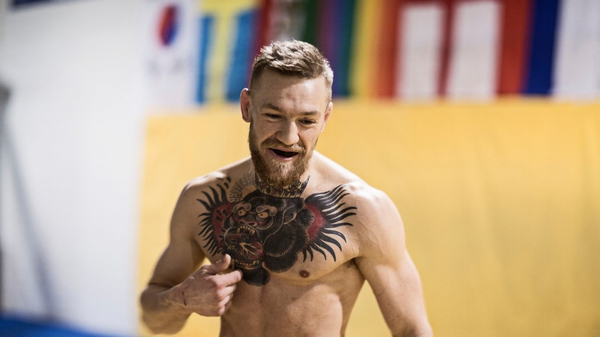