The family of the late Debbie Reynolds and Carrie Fisher were joined by friends and fans of the mother and daughter at a public memorial in Los Angeles on Saturday.

Eighty-four-year-old Singin' in the Rain star Debbie Reynolds passed away from a stroke on December 28 last year, one day after her daughter Carrie Fisher died in hospital.

The 60-year-old Star Wars legend had suffered a heart attack on a flight from London to Los Angeles four days earlier on December 23. They were buried together at Forest Lawn Cemetery earlier this year. 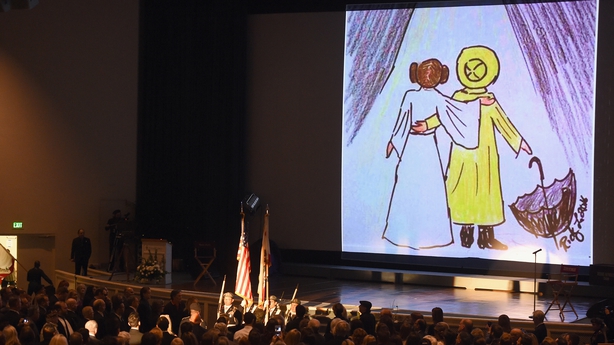 Debbie Reynolds' son Todd Fisher told those who had come to celebrate the stars' lives at Forest Lawn Cemetery on Saturday that there were "no finer people" than his mother and sister.

"When Carrie died, my mother decided to change her plans a bit," he said.

"My mother always said to me, 'I never want to go to my daughter's funeral service. I would like to be buried with Carrie'."

Writing in the memorial programme, Todd Fisher and his wife Catherine said both women had "lived every precious minute of their lives".

"They left nothing undone and nothing unsaid," wrote the couple. "They both loved a great party so what better way to celebrate them than to throw them one?"

Clips from the actors' movies and home videos were shown. Star Wars droid R2-D2 joined Todd Fisher on stage and there was also a Singin' in the Rain tribute from members of the Debbie Reynolds Dance Studio.

A new song by Carrie Fisher's close friend, singer-songwriter James Blunt, was played over the video montage and there was a rendition of the Cyndi Lauper ballad True Colors by the Gay Men's Chorus of Los Angeles.

Ghostbusters star Dan Aykroyd paid tribute to his one-time fiancée, telling the audience that Carrie Fisher tried to get back together with her ex-boyfriend and future husband, singer Paul Simon, while they were dating.

"She had long conversations on the phone in my presence with Paul Simon with whom she was attempting to reconcile at the time of my relationship with her.

"Here I found myself in love with a woman who was returning to a former intimate, and might I say a better choice."

More than 1,200 people attended the memorial at Forest Lawn Cemetery but Carrie Fisher's daughter Billie Lourd did not join her uncle for the ceremony. A family source told US celebrity publication People that the memorial was "too soon" for the 24-year-old actress.