Former Boyzone singer Ronan Keating has said he is "bursting" with excitement about becoming a father for the fourth time.

Keating and his wife Storm appeared on the Loose Women panel show today to discuss their delight over their first child together.

The pair announced they were expecting their first child together last December. Storm told the panel that she was “over the moon” to be expecting a baby, while the former Boyzone frontman was equally as excited, saying “"I'm bursting. I cannot tell you how excited I am” 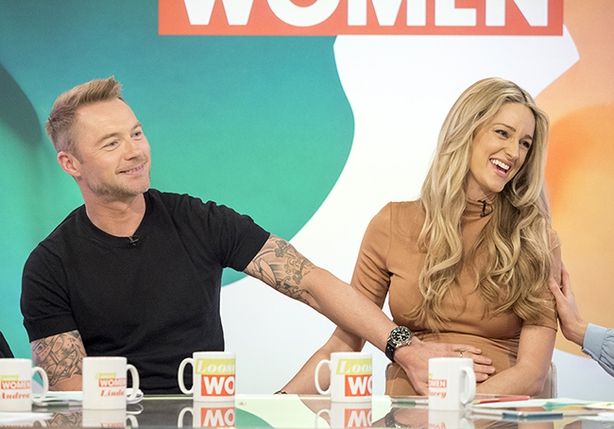 Ronan is already father to Jack, 17, Missy, 15, and Ali, 11, from his marriage to Yvonne Connolly and has previously spoken about his desire to expand his family.

He said his children, who were best man and bridesmaids at the couple's wedding in August 2015, cannot wait to meet their new sibling.

"The kids are over the moon, Ali FaceTimes every day saying 'How big is the bump? Can I see the bump?'

However, Storm has suffered a bumpy pregnancy and the pair shared a pregnancy horror story which left the audience in fits of giggles.

"I was on tour in September in the UK and we were driving from Plymouth to Bournemouth and the morning sickness was so bad for Storm that we had to pull over on the motorway and she climbed out of the car and climbed into the hedge and lay down on the motorway in the hedge for 15 minutes", said Ronan.

Storm revealed that Ronan was at such a loss of what to do, he simply walked their dog up and down, while she continued to lie there.

"I literally crawled, not just a figure of speech. I said just 'Don't touch me.' Ronan just walked the dog up the side of the motorway."

Keating and the rest of Boyzone will mark 25 years of the band in 2017, but without bandmate Stephen Gately, who passed away suddenly in 2009.

"Twenty-five years of Boyzone is exciting. So much has happened to the band, as we all know, and it will be nice to mark the 25 years in some shape or form. We don't know if it's a tour or an album but we will do something", he said.

The singer will be on cinema screens next month in the World War II drama Another Mother's Son, which opens on March 24. He previously appeared on the West End stage in the musical Once and made his lead film debut in 2013's Goddess.