Eddie Redmayne and the cast of Fantastic Beasts have said that it's a "relief" to finally be able to share the film with fans because they found it hard to keep everything a secret for so long.

A tight lid had been kept on the plot details of the Harry Potter prequel in the run-up to its release, and leading man Redmayne said keeping secrets from his friends and family was a challenge.

"You sort of feel like there are people watching you and checking every word that comes out of your mouth," Redmayne told RTÉ Entertainment about the film's secrecy levels.

"But no, it's so exciting [to share it with the fans] because it's been kind of hard to keep secrets because my best friends and my family are like 'So...?' and I'm like 'No, it's eh, fully zipped'."

Redmayne plays magizoologist Newt Scamander in the feature, and his co-star Katherine Waterson, who plays an Auror for the Magical Congress of the United States of America (MACUSA), said she is relieved to be able to talk about the plot at last, but she can't get used to not having to watch her tongue.

"It's a relief to be able to actually talk about some of the plot and everything but at the same time, because we've been trained to not speak about it for the last year, I almost feel like I'm doing something wrong when I open up my mouth," Waterston laughed.

The pair also shared their love for their co-star Colin Farrell, with Oscar-winning Redmayne saying he "adores" the Irish actor.

"I adore Colin Farrell," Redmayne told RTÉ Entertainment. "I've adored Colin Farrell for a long, long time and it was actually one of the great thrills of this project was getting to work with him. He's such a lovely man, such a gentle man. Brilliant, just brilliant."

Waterston added, "My character, he's my boss, so I had to be kind of intimidated and in awe of him, so I didn't have to act. I'd just stare at him and his beautiful eyebrows."

Fantastic Beasts and Where to Find Them hits cinemas on November 18. 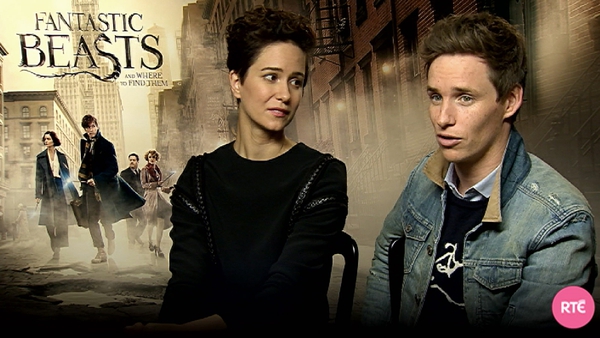 Redmayne got a "great thrill" from working with Farrell Headlines