Contains ALL of the spoilers!

Following on from the happy reunion of Sansa and Jon and the incredible scenes of the Khaleesi emerging from the flames of the Temple of the Dosh Khaleen, it was time for a bit of misery – it is Game of Thrones after all.

In what was a truly devastating turn of events we saw the death of another beloved dire wolf and, even more distressingly, we lost the kind-hearted and loyal Hodor as he protected Bran and Meera from the oncoming army of White Walkers.

It has been clear since the young Ned Stark appeared to hear Bran calling him during the Tower of Joy flashback sequence that there was more to Bran's greensight abilities than simple time travel and this episode proved just that.

Bran and the Three-Eyed Raven took a trip back in time to the birth of the very first White Walker and we learned that they were actually created by the Children of the Forrest who wanted to forge an army to fight the First Men. It all spiralled out of control from there and life north of The Wall was changed forever. 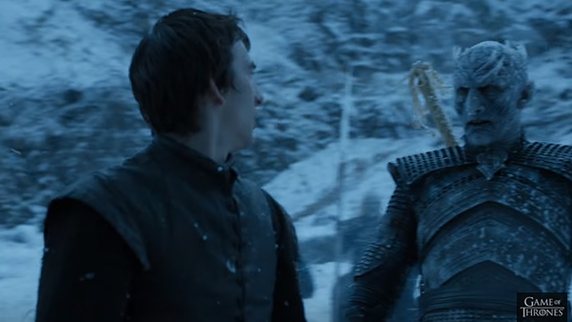 Flying solo this time, probably out of frustration with the Three-Eyed Raven for always cutting his visits back in time short, Bran found himself standing in front of the White Walker army and he was able to walk through them undetected. When he came face to face with the Night's King, however, he was rumbled, finding himself branded by the King's fingerprints. So, Bran was actually able to be seen and touched by someone in the past – interesting.

That's not where the revelations ended, sadly. It was during another trip back to Winterfell that things really hit the fan.

In the present day, as the White Walkers attacked, Bran and the Three-Eyed Raven were on another trip back to Winterfell, where a young Hodor/Wyllis was seen tending to the horses. As Meera tried to wake Bran to get him to warg into Hodor so they could be saved from certain death, Bran did something really, really crazy and warged into Hodor while still in the past. 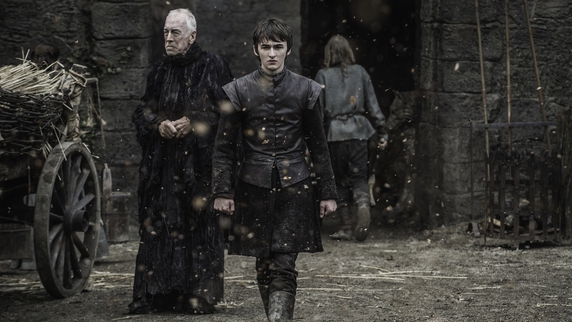 One of the biggest questions has always been, why does Hodor only ever say Hodor? And it's a question I wish I still didn't know the answer to.

As Meera rushed off into the snow with Bran, she told Hodor to hold the door to keep the White Walkers inside so they could escape. Meanwhile, in Winterfell, Wyllis/Hodor's eyes glaze over as they do when Bran wargs into him, and he collapses on the ground as though having a seizure. As he lies there he repeatedly says 'hold the door' frantically until it simple sounds like 'Hodor'. Absolutely tragic.

In the present day, Hodor is soon killed by the White Walkers in what was a truly unsettling turn of events.

So what does this mean? It seems as though it's not just the past that is already written, but the present and future too. If Bran could affect Hodor in such a way, what else has he done? How much of the story so far has been as a result of Bran's actions?

The Three-Eyed Raven told Bran before his death that it was time for him to become the Raven. Does Bran grow up to actually become known as the Three-Eyed Raven? Was the Raven actually future-Bran coming back to try to teach his young self some important lessons? What exactly is going on here?!

Bran's storyline dominated the episode, and while his scenes speak to the series as a whole and the larger, looming threat of what is to come, at Castle Black Jon and Sansa began plotting their journey to regain Winterfell, and who turns up? Only Littlefinger. 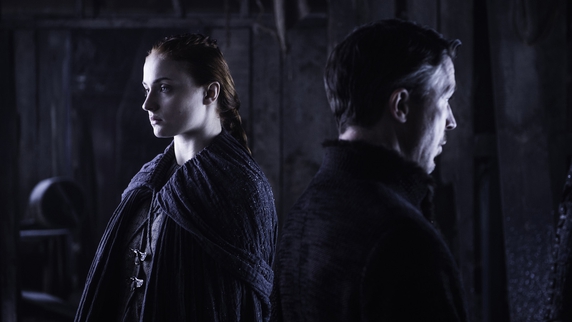 In a moment of real strength, Sansa tells Littlefinger exactly what she went through as Ramsay's wife and he apologises for leaving her there because he didn't foresee what was going to happen. He did seem taken aback by what she was saying, be it surprise that she was standing up for herself or horror at what happened, I'm not sure. Before he leaves he tells her that the Tully army is ready to support her in the battle for Winterfell, numbers they will need if they are to defeat Ramsay.

Jon and Sansa later set off to gather support from the (hopefully still loyal) northern houses, but not before Brienne sums Jon up perfectly – "He seems trustworthy, a bit broody perhaps". There's also some more quality looks between Tormund and Brienne. #RelationshipGoals. 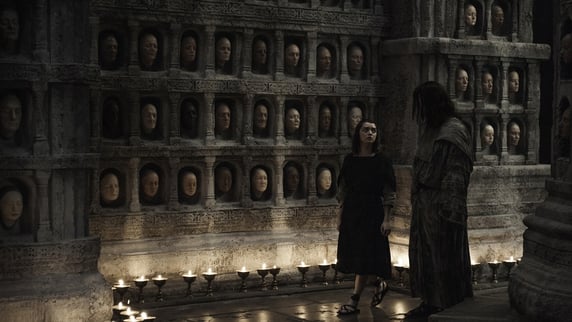 In Braavos, Arya continues her training and is given her first mission - to kill an actress performing in a local theatre troupe. Going down to see their show, which depicts King Robert Baratheon's death at the hands of a boar, and the drama surrounding Joffrey's succession, Arya is disgusted by the portrayal of her father Ned and sister Sansa. We knew she wouldn't ever be "no one".  There's also a sneaky cameo by Richard E. Grant – will we see more of him as Arya goes about her mission?

Over in the Iron Islands, we witness our first Kingsmoot. As Yara stakes her claim on the throne, and receives support from her brother Theon, the Ironborn cheer and chant her name, until, of course, her murderous uncle Euron arrives on the scene. 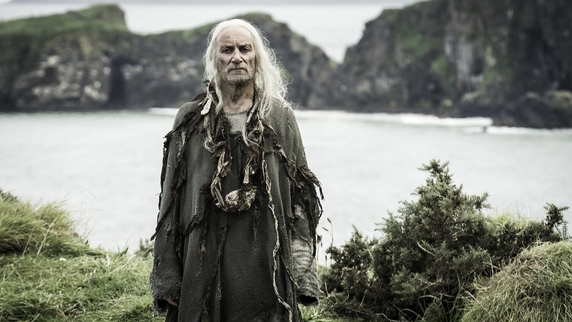 Admitting to killing Balon, Euron somehow manages to convince everyone that he did it for the good of them all and reveals his intentions to marry Daenerys, who will be won over by the thousand ships he wants to build for her. "Together we will take the seven kingdoms" - we don't fancy his chances.

The Ironborn way of crowning a king is to essentially drown them in the sea, and if they survive then they are crowned. I wonder how many haven't made it through? Anyway, as this is happening Yara, Theon and their supporters all flee, taking the best ships with them. They definitely wouldn't be safe with Euron in charge, but where will they go?

So what of Dany? In our very quick catch up with the Mother of Dragons, we see a moving and emotional scene between her and Jorah, who is still very much in love with her.

Revealing to her that he has greyscale, and it's spreading pretty quickly, she is devastated and orders him to go off and cure himself. We've no doubt that he'll try because there's nothing he wouldn't do for his Khaleesi. 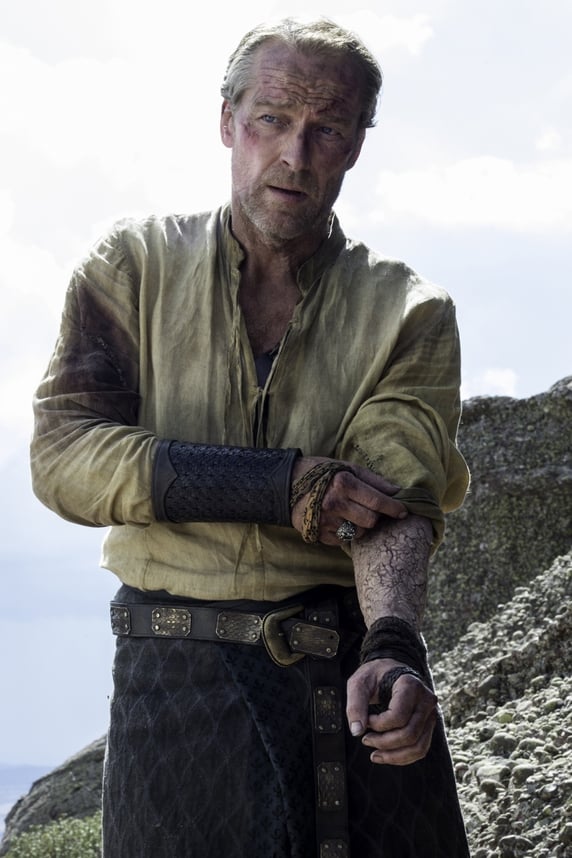 In Meereen it seems that Tyrion's deal with the masters has paid off as the Sons of the Harpy cease their attacks. He stresses the importance of dealing with the PR of the event correctly, making sure the people know that their Queen was behind the peace talks. 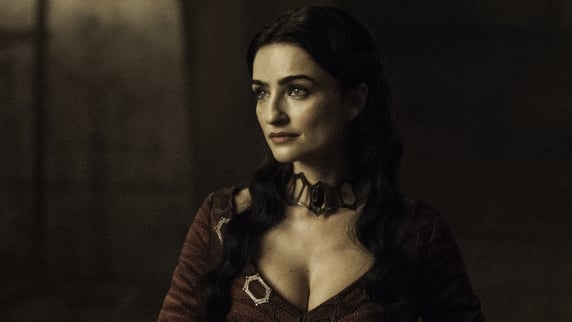 Who will spread their word? A new red priestess by the name of Kinvara. Wearing the same necklace as Melissandre - so we can assume she's also as old as the hills - she says Dany is the chosen one and that her dragons were a gift from the Lord of Light himself. So she's backing Dany and Melissandre is backing Jon Snow. It'll be interesting to see which, if either, of them is right.

The episode was full of plot development, devastation and the action sequences were fantastic. We're halfway through the season now (already!) and with Jon Snow and Sansa on the move the battle for the north must be just around the corner. As Dany sets off on her white horse, with her new Dothraki followers, she, too, is on the move.

As the world of Game of Thrones closes in even further, hopefully we'll have some more character interaction and crossovers and, fingers crossed all of our favourites make it out alive. 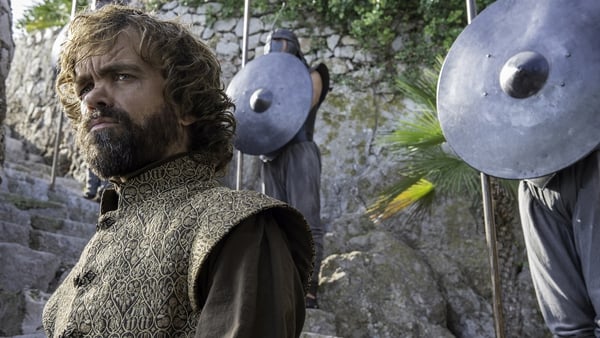 Review: Game of Thrones – Book of the Stranger