As we near the season’s mid-way point (yes, already) we are treated to some emotional, compelling and awe-inspiring scenes, writes Sinead Brennan.

**If you haven't seen the episode look away now - Spoiler alert!**

I have to start at the end because WOW. Daenerys Targaryen, the Unburnt, made her return in dramatic fashion.

After spending some time with the Dosh Khaleen, who tell themselves that the Khals rely on them for the wisdom as a way of making themselves feel better about their situation, it’s clear Dany is plotting her escape and she manages to reel in her first supporter; another young Khaleesi.

The pair excuse themselves to “make water” when they bump into dynamic duo Jorah Mormont and Daario Naharis, who seem to have spent their whole pursuit bickering with each other, and the plan is made, though we don’t see it’s incredible vision until the final moments of the episode.

Being taken to see the Khals, where they will decide whether or not Dany will be allowed to join the Dosh Khaleen officially, she tells them of Khal Drogo’s vision for the world and his plans to sail across the Narrow Sea and claim the Iron Throne for her. Of course, in their arrogance, they don’t take the white haired “midget” seriously and laugh at her when she tells them that they are all too weak to lead the Dothraki and if they will not serve her as leader, they will all die.

In a bold move, Dany meets their laughter with fire, burning down their temple with them all locked inside. 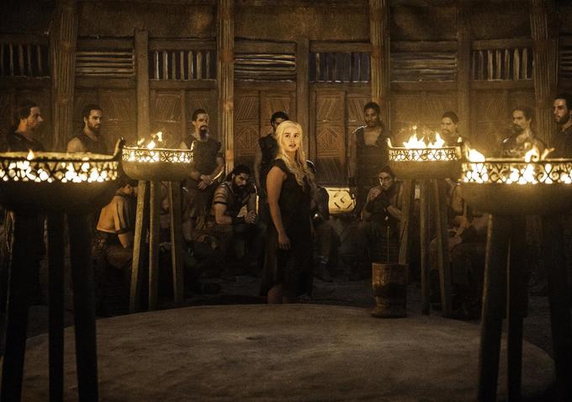 As the flames soar, the Dothraki people all gather around just in time to see the Khaleesi emerge from the flames, unburnt and godlike. As she stands before them they all bow and it’s one of those television moments that just leaves you with your jaw on the floor.

This is the Daenerys we all know and love and after her time spent in Slaver’s Bay it’s great to see her being fierce again.

Here’s hoping this means that she will head west and stake her claim on the Iron Throne sooner rather than later.

Back in Meereen (yes, we’re STILL having a weekly visit there), Tyrion is doing what Tyrion does best – drinking wine, being wise and ruling. The one good thing about the scenes in Meereen is the screen time Tyrion is getting, and for the moment, there isn’t really anywhere else that he can go, so for now, we’re stuck there.

As he meets with the masters from the other cities in Slaver’s Bay, he proves that he knows his enemy and their motivations, offering them a deal that should they pull their support for the Sons of the Harpy in Meereen, he will give them 7 years to end slavery in their own cities.

This doesn’t go down well with Greyworm and Missandei at all, but I think by the end of it they start to come around to Tyrion’s way of thinking once they realize that he doesn’t actually trust the masters.

In possibly one of the most moving scenes in Game of Thrones to date, we finally see something good happen to Sansa as she is reunited with her big brother Jon Snow. 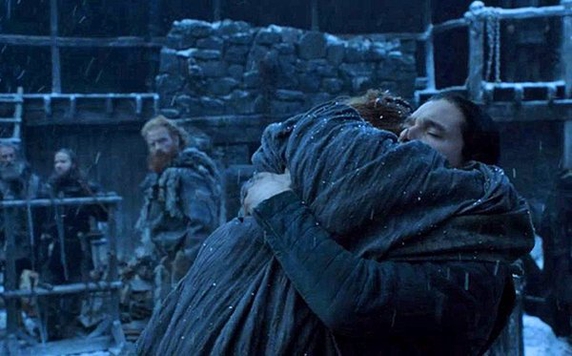 At the episode’s opening we see Jon packing up his bags, taking some stick from Edd about leaving  - how could he, he took an oath blah blah blah – and pointing out that he has already given his life to the Night’s Watch and fancies heading south to maybe catch a bit of sunshine.

Knowing that Sansa was Castle Black-bound I thought this was going to be another case of Jon being so close to one of his siblings and just missing them – remember when him and Bran came this close to being reunited – but in what was just a beautiful and emotional scene they actually did come face to face.

As their eyes met across the courtyard I had shivers and when they finally embraced I did get a little teary-eyed. It was such a beautiful and happy moment, one that we don’t normally experience on Game of Thrones, that it almost felt like the showrunners were toying with us. I was half expecting something really dark to go down moments later just to balance things out – but they actually let us have this, and it was amazing.

In another lovely scene between the two, they reminisce about the food they ate in Winterfell growing up, Sansa apologises for being awful to him when they were kids, and they agree that they wish they had never left home.

Sansa then implores Jon to take back Winterfell so they can go home, but he is tired of fighting because “I’ve fought and I’ve lost”. Even as he says this we know he’s going to end up fighting any way, because he needs to.

It is when he receives a letter from Ramsay, who signed it off as “Lord of Winterfell and Warden of the North”, that he realizes he must act. Ramsay has his little brother and threatens to do all sorts of horrific things if he does not have Sansa returned to him. 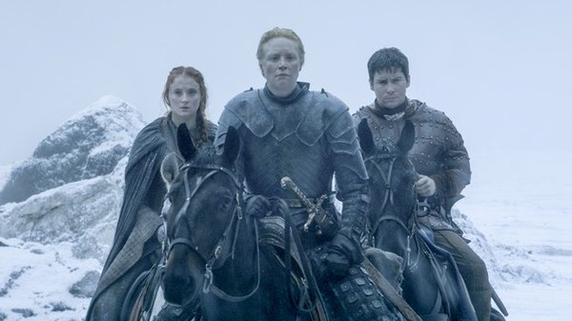 Tormund Giantsbane – who seems absolutely enthralled by Brienne of Tarth, what a couple they would be – offers up his army to help Jon and Sansa reclaim their home, so hopefully the next episode will see this battle commence.

Speaking of Brienne, she shares an intense little scene with Daavos and Melissandre where she throws shade at the Red Priestess for using her dark magic to kill Renly and reveals to them that she killed Stannis. Awkward.

In Winterfell, Ramsay is being his creepy self, having Osha sent to see him. This scene was never going to end well.

Ramsay loves to play games and allows her to think that he’s falling for her stories of being poorly treated by the Starks, only protecting Rickon so she could sell him to the highest bidder etc, lulling her into thinking that if she can just reach for the dagger on the table, it will all be over.

But of course, in a chilling moment, he tells her that he knows she helped Rickon and Bran escape before stabbing her in the throat. He then returns to eating his apple as he watches her bleed out on the floor. Delightful stuff, as always, from him. 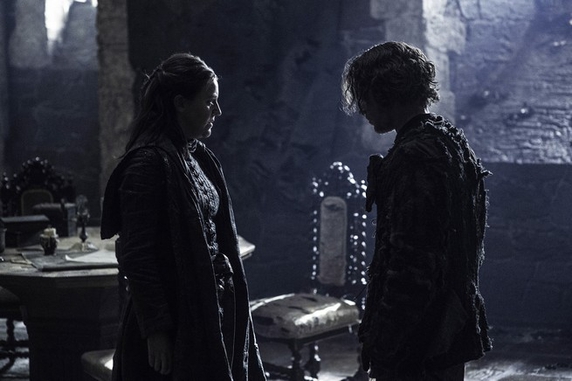 As Theon arrives home and is reunited with his sister Yara he is reminded of the rescue mission she undertook to try and free him from Ramsay’s grasp and of the men she lost on the way. Thinking that he’s come home just in time for the Kingsmoot because he wants to claim the throne for himself, she isn’t too happy to see him, especially when he is so weak. When he makes it clear, however, that he has no intention of ruling, and that he thinks she should be in charge she softens ever so slightly.

We’ve never had all that much to do with the Iron Islands but this Kingsmoot looks like it will change that dramatically.

Two major characters make their returns in this episode; Littlefinger is back in the Vale, showing just how much control he has over Lord Robin as he convinces him that they need to send their army to Winterfell in order to protect Sansa, and Margaery Tyrell, who is still being held captive by the High Sparrow. 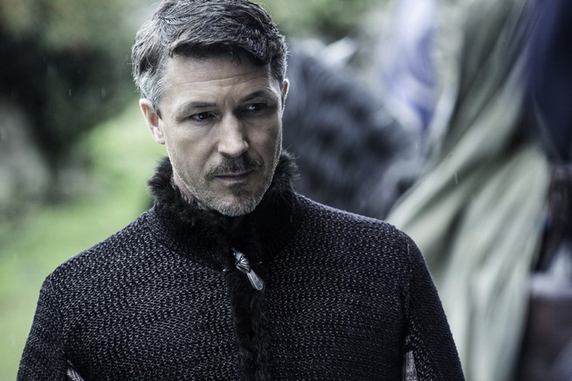 It’s great to have Littlefinger back on our screens because he always orchestrates some kind of drama. Hopefully, after sending Sansa to the Bolton’s last season his next plot will have a less traumatic outcome. Sending Lord Robin’s army to help the upcoming war in the north would be great for our guys, but Littlefinger wouldn’t do something without it benefitting him directly, so we’ll have to watch this space and see exactly what he’s angling towards. He’s a slippery one.

Margaery returns and she has seen better days. Spending that amount of time in captivity would crack most people – such as her brother Loras who is ready to give up on everything – she shows us that she is still strong and won’t be broken by the Faith Militant.

Tommen tells Cersei that the Sparrow – who has unbelievable screen presence, we’ll give him that – will want Margaery to do a walk of atonement as well. Of course, Olenna Tyrell says this is out of the question, but Cersei and Jaime have formed a plan. As Margaery is about to start her walk, the Tyrell army will arrive and save her, kill the sparrow, and restore order to the city.

I’m sure Cersei wouldn’t mind if Margaery didn’t make it out of the curfuffle unscathed, but for now she’s pretending to play nice.

Another excellent episode with some truly outstanding scenes. The world of Westeros seems to be closing in and it feels as though things are about to reach a head before the real battle for the Iron Throne begins.