RTÉ News' Western Reporter Teresa Mannion has said she is gobsmacked at the global reaction to her storm reports on television on Saturday night.

In the eye of Storm Desmond, Mannion delivered her impassioned reports from the Salthill promenade in Galway. In under an hour, she had become an internet sensation.

Speaking to Ray D'Arcy on his RTÉ Radio 1 show on Monday, the veteran reporter described the whole experience as "mad".

"I can totally see how it's comedy gold, but you've got to walk in my shoes for a moment," she said.

"I was in my own little storm bubble and trying to do my job and deliver."

Mannion said that her RTÉ News colleague Aengus Mac Grianna had been "counselling" her over the weekend because he had his "own special powder-puff moment" when he didn't realise he was live on air in 2013 – a clip which also went viral on the internet.

Her teenage sons think the attention their mother has received is hilarious. When Mannion went to do a report near the River Moy on Sunday she was surrounded by local children. "The kids just came from everywhere," she said. "'It's the girl from Salthill! It's the weather girl!' I posed for about 100 selfies in Ballina."

The veteran reporter has gained over 3,000 followers on social media following her packages on Saturday with very few negative comments aimed in her direction.

"I really am a saddo on Twitter," she laughed. "If I get a few followers a week I'm happy - I can't stop looking at the phone!"

Playing down her achievements in delivering her reports, Mannion said that there was "a bit of a breeze blowing" but went on to admit it was the most physically challenging piece-to-camera she had done in her 25-year news career.

"I had no idea I was bellowing!" she said. "Charlie Bird has nothing on me now! Tom Drury was laughing and said, 'You can tone it down a bit for the Nine!'."

Mannion also found time to mention the shining example set by her former colleague, RTÉ News' Western Correspondent Jim Fahy, a man, she said, who "never took his wellies off".

When her parents went to mass in Cabra in Dublin on Sunday, she was mentioned in the prayers for people who were out in the treacherous conditions. Her father had contacted her on Monday morning to say he heard details of her exploits on It Says in the Papers on Morning Ireland and that she should get an IFTA.

Laughing at the campaign to have a storm called after her, Mannion said that she had actually been born during a hurricane – Hurricane Debbie. But she revealed she was brought back down to earth by her husband Dave O'Connell who said: "You can't have the storm called after you; they go in alphabetical order – they're only on 'D'!"

"I know we're having fun with it and it is what it is," she continued. "But we went to that location to say it was really dangerous... It was very much about a public service."

After her RTÉ Radio 1 interview, Mannion was off to talk to CNN, with no signs of the storm dying down just yet. 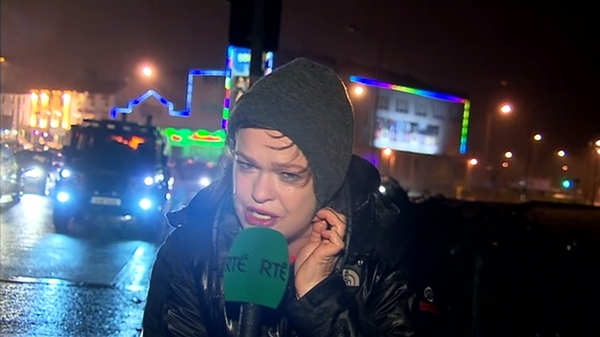