Garth Brooks has compared his five axed gigs at Croke Park to losing a member of his family.

Speaking about the 'Croker crisis' that  left 400,000 ticket-holders disappointed earlier this year, 52-year-old Brooks told a British newspaper, "I’m not trying to be dramatic, but my wife would sit here and tell you, ‘I’ve never seen him ache like that for anything other than loss of family.’ I mourned that and I still am, to tell the truth. Hurts like hell.”

Aiken Promotions broke the news about the cancelled concerts in a statement in July, "It is with great regret that Aiken Promotions today announce that the 5 concert Garth Brooks Comeback Special Event at Croke Park has been cancelled. No concerts will take place."

Despite, the concert controversy, Brooks, who has just released Man Against Machine, his first album first studio album since 2001, revealed that Ireland was still one of his favourite places to play.

He said, “It was always the place where you couldn’t start a song, two words and it’s gone, they’re taking over. That’s the way music should be. When you hear them singing your stuff in Croke Park, it’s like heaven.” 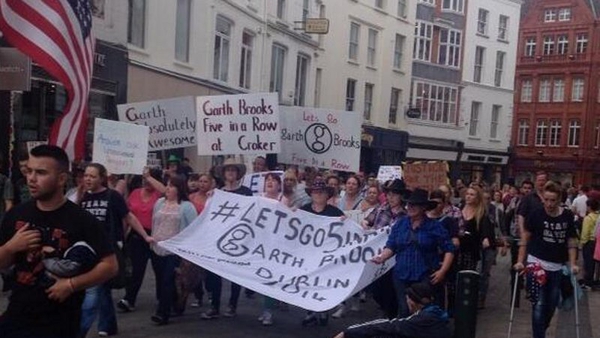