We'll find out tonight when the Golden Globes are on RTÉ Two but it looks like Tina Fey and Amy Poehler were hilarious as returning hosts of last night's awards.

Fey's opener had everyone giggling: "Good evening to everyone in the audience and to all the women and gay men watching at home.

"We're going to get this done in three hours - or as Martin Scorsese calls it, act 1."

Poehler followed up with a jibe at Netflix, following their successful year: "Enjoy it while it lasts Netflix, because you're not going to feel so smug in a couple of years when Snapchat is up here accepting best drama."

Later Fey had everyone in stitches when she delivered a Gravity gag referencing Sandra Bullock and George Clooney: “[He] would rather float away in space and die than spend one more minute with a woman his own age.”

Poehler added: "Congratulations to all the wonderful actors nominated tonight, from the amazing Chiwetel Ejiofor to the stunning Lupita Nyong'o to American treasure Tam Honks. Dammit, I knew I was going to screw that up!."

She later teased Behind the Candelabra's Matt Damon: "Matt, on any other night in any other room, you would be a big deal. But tonight — and don't take this the wrong way — you're basically a garbage person." -

Fey later took a playful pop at Joaquin Phoenix: "One of my favorite films this year is the movie Her. Which takes place in the not-so-distant future, which is perfect because so does Joaquin Phoenix."

Not even Best Actor award-winner Matthew McConaughey escaped and the duo praised him for losing 45 pounds for his role in Dallas Buyer’s Club and then they added it's "what actress call being in a movie!"

The audience seemed to get a great kick out of one particular sketch which saw Poehler dress up as Fey's adult son who revealed that Harvey Weinstein was the father!

Watch the Golden Globes tonight at 9pm on RTÉ Two. 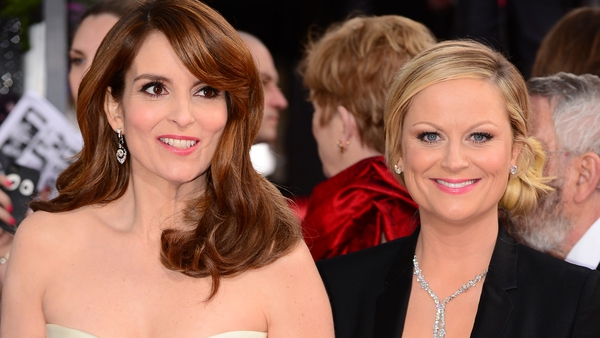 Fey and Poehler to host next two Golden Globes