Coronation Street actress Jennie McAlpine has said that she is dreading when co-star Julie Hesmondhalgh leaves the street.

Hesmondhalgh, who plays Hayley Cropper, announced earlier this year that she is set to leave after 16 years. McAlpine, who plays Fiz, filmed her first scenes on the show 12 years ago with Hayley who briefly was her foster mother.

Speaking to the Daily Star Sunday McAlpine said "Towards the end of the year there will be Hayley's departure, which I am dreading. I filmed my first scenes on Corrie with Julie so it's going to be very emotional."

"I have no idea what her exit is going to be, she doesn't know yet either. Even thinking about it gets me going. It's going to be so sad."

Speaking about her role on the show McAlpine said "I absolutely love working on Corrie. As long as they are writing great stuff for me, I want to be a part of it for as long as I can. It's a great place to be.

"I'm contracted until next year but have no plans to leave. You really don't get much bigger than Corrie. And at the moment we really are flying. It just goes from strength to strength.

"Of course, I felt incredibly honoured to have been a part of the biggest storyline of the year. Kirsty's abuse of Tyrone was one of those ones that really gripped the nation.

"I hope [Fiz and Tyrone] stay together, there's so much they can do with them. We've had the comparisons with Jack and Vera, which is a huge compliment. But there'll only ever be one Jack and Vera." 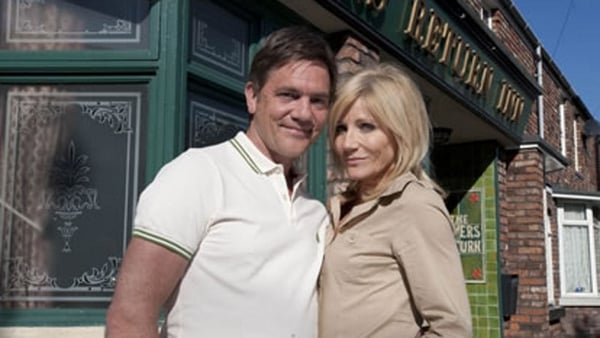