Former Westlife singer Nicky Byrne was eliminated from Strictly Come Dancing last night but said the experience had been "so much fun".

The former pop star failed to impress the judges with his fusion of samba and American smooth with partner Karen Hauer.

Dancing to Olly Murs' and Flo Rida's Troublemaker, the pair performed an energetic routine that saw Byrne sliding across the floor on his knees.

But after being forced into a dance-off with Denise Van Outen and James Jordan, the judges last night voted unanimously to kick Byrne, a former youth team footballer with Leeds United, off the show.

Byrne, the ninth celebrity to leave the show, said: "It has been just so much fun. It is the biggest and best show in the world.

"Karen, every week, every day, has been incredible. We had a bit of a shaky start in terms of judges and stuff, but we just seemed to improve.

"I have to say thank you to the judges - you have been absolutely amazing with all your advice, all the people backstage - even the people that get you your coffee - I am going to miss the whole thing, it's been an amazing experience."

He told Byrne: "You need a lot more bounce in the samba, there wasn't any bounce. Your posture in the American smooth part of it was truly dreadful, I've got to be honest."

Meanwhile, Kimberley Walsh topped Saturday's leaderboard on the BBC show, with a perfect score of 40 points.

The Girls Aloud singer and partner Pasha Kovalev dazzled the judges with their effortless tango crossed with cha cha to The Weather Girls' hit It's Raining Men. 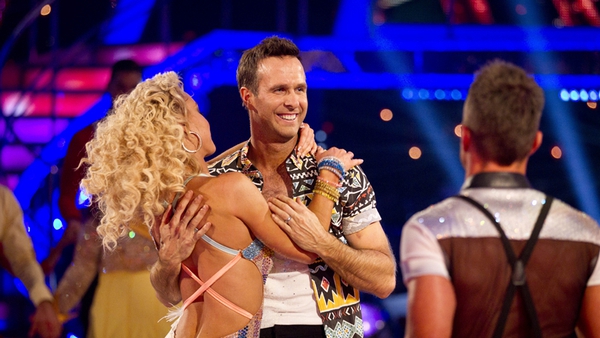