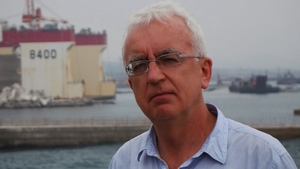 Peadar King speaks with the broken and bereaved of Israel and Palestine who yearn for an end to the fighting.

Death brings silence. The silence of the dead. No longer able to speak for themselves. And so we often take it upon ourselves to speak for the dead. We self-consciously and maybe self-importantly clear our throats, practice our lines, and make pronouncements for and on behalf of the dead. We become like James Joyce’s creation, our own Gabriel Conroy, as in his short story The Dead. We build monuments, claim seamless political heritage, cypher justifications, create monopolies of narratives, all in the name of the dead.
Standing in front of the Yad Vashem museum in Jerusalem, Palestine / Israel I am conscious of how the building speaks of the dead in this highly polarised and contested of spaces.

With strongly-held religious resonance, the martyr myth runs deep in war mythology, particularly in the Middle East. And it has a distinct resonance for Muslims dating back to the death (martyrdom) of Iman Husayn ibn Ali, the grandson of the Prophet Mohammed at the Battle of Karbala (Iraq)  in the year 680, an event that is still commemorated to this day. It’s not, however, unique to Islam. Martyrs invoked too in the Christain final benediction for the dead " May the angels lead you into paradise; may the martyrs come to welcome you and take you into the holy city, the new and eternal Jerusalem.

Colm Ó Mongáin, Deputy Foreign Editor, reports on the difficulties experienced by two border women either side of the divide in Gaza.

And here also at the Yad Vashem museum in Jerusalem. "Holocaust Martyrs and Heroes Remembrance". Martyrs and heroes. The burdening of the dead. State-sanctioned burdening. Politicised burdening. In life who would want to carry such burdens? And perhaps the holocaust dead are burdened more than others?

For the Israeli writer, activist and educator Eitan Bronstein Aparicio, founder of de-colonizer, a research / art laboratory for social change, the memory of the Holocaust dead is misremembered and abused. Politicised by the Israeli state. It has become, he claims, "a big Israeli justification to have a State only for Jews". But although he is not alone in stating this, it remains a minority position within the wider Jewish community.

"Israel is really abusing the memory of the Holocaust", he argues.  "It has (become) a political project. We should struggle to separate the Holocaust from the State, to really struggle so that the State of Israel would not have anything to do with the Holocaust".

We need your consent to load this rte-player contentWe use rte-player to manage extra content that can set cookies on your device and collect data about your activity. Please review their details and accept them to load the content.Manage Preferences
Jackie Fox speaks to Palestinians in Ireland about the most recent spell of violence in Gaza

That political project he argues is based on the construction of a sectarian state, and a heavily militarized state at that.

"It’s terrible. We are taking the wrong lesson from the Holocaust. Instead of saying racism, anti-Semitism and other forms of hating the other brought such a terrible crime against humanity - against Jews, against communists, against gays - the lesson should have been: ‘We oppose those ideas and those practices of rejecting the other, and  (these) violent and brutal nationalistic ideas".

Rami Elhanan is the son of a Holocaust survivor.  His late father was held prisoner in Auschwitz.

"Seventy-five years ago they took my grand-parents  to the ovens".

Its starkness is in its simplicity. Hearing it first-hand jolts.

Rami does not talk of martyrs or monuments. Nor does he talk about heroes. Rather he talks about peace and reconciliation. Justice. And it comes from the heart. And his message is stark in its simplicity.

"Twenty-one years ago I lost my fourteen-year-old daughter Smadari, in a (Palestinian) suicide bombing in Jerusalem.

"Ever since then I devote my life to express this one message, we are not doomed, it’s not our destiny to keep on killing each other.  We need to start talking to each other and to stop the circle of violence. We need people against this ongoing situation which one people is dominating another.

This must be changed.

I will finish with a message of a Jew, and I am a Jew, with the utmost respect to my people, to my tradition, to my history, and I will say that ruling and oppressing and humiliating and occupying, millions of people without any democratic right for so many years is not Jewish, period, no two ways about it, and being against it is not anti-Semitism.  And, if you get into an argument, you can quote me".

The voice of the living. The dead left to rest with the dead. No longer the political rag-doll. For that I would imagine they are grateful.

Peadar King is presenter /producer/director of the documentary film Another brick... that airs on RTÉ One Television on Tuesday 21 May 10.55 as part of the What in the World? series. 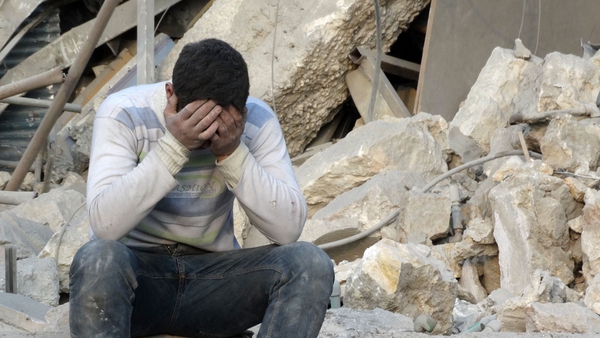 War is not a sport - and sport is not a war

what in the world