Documentary makers Marc McMenamin and Sarah Blake introduce their new RTÉ Documentary on One production, The Custom of the Sea – listen to it above.

The Custom of the Sea tells the story of a shocking and harrowing incident of cannibalism in 1835 aboard Limerick ship, The Francis Spaight, on a return journey from Canada when four of the crew were eaten by their own crewmates.

The sailing ship, the Francis Spaight, was registered in Limerick in May 1835 and was advertised in the newspapers of the time as the "grandest ship Limerick had ever seen". It was built for the Canada trade, whereby Irish emigrants were to be brought to the Americas on the outward journey and timber was to be transported on the return trip. It was intended to be "one of the most superior vessels ever offered to emigrants". It was named after its owner, the Limerick merchant, Francis Spaight.

According to Dr. Paul O'Brien of Mary Immaculate College Limerick, 'The Spaight family first emerge in the 18th century. They’re typical of the rise of the merchant class of the 19th Century. They emerge in business from about 1808 and marry up into other merchant families. They become embedded in the social and commercial life of the city and Spaight himself later becomes a justice of the peace, a local magistrate and eventually President of the Chamber of Commerce.’

On the night of 3rd December 1835, the ship ran into a storm in the middle of the Atlantic and turned bottom up. On getting the masts cut away, it again righted, but with the loss of three of the crew of what was originally eighteen men. Provisions were lost overboard, and the sailors found themselves adrift at sea in freezing winter conditions with no food or water. What was to follow was a horrendous and unfathomable incident in the shared history of both Canada and Ireland, when the Francis Spaight became infamous for an incident of cannibalism.

Many people from Limerick of a certain age would know the Spaight name, remembering Spaights’ Hardware shop on Harvey’s Quay in the city. The site is now occupied by Dunnes Stores, but in 1835 it was also a hive of mercantile activity, at the centre of which was the Spaights’ Shipping Company. Francis Spaight himself was a wealthy landlord from County Clare who would eventually go on to purchase Derry Castle on the shores of Lough Derg near Killaloe.

While at times he was benevolent to his tenants, he was ultimately a businessman at heart and sensed an opportunity to clear local landed estates in Clare of tenants by helping them emigrate to Canada. Spaight would use his ships to transport passengers to Montreal, Toronto, and the Maritime provinces via Quebec City and St John, New Brunswick. On the return journeys, his ships would be loaded with white pine which grew in plentiful supply along the Ottawa river valley. This was a welcome commodity in the British empire due to timber shortages following various trade disputes.

Also from Clare was Kilrush mariner Timothy Gorman who would become the captain of the ill-fated Francis Spaight ship. Gorman was an experienced seaman who was well accustomed to the hardships of life on the sea. What the crew of the Francis Spaight didn’t know, however, was that Gorman was ruthless when it came to survival at sea - and that this ruthlessness would be horrifically put to the test when the ship got into difficulty on its return journey from St John in December 1835.

Researching the story of the Francis Spaight had several important strands both in Canada and in Ireland. Our first port of call was to research the incident through newspaper archives at both sides of the Atlantic, as well as shipping records and intelligence reports in order to locate the Francis Spaight in various ports in both Canada and Ireland on its journeys.

In addition to newspaper accounts of the incident, a first-hand account was printed in a pamphlet which we found in Toronto Public Library. The head of special collections, archivist Peggy Purdue, explained how it had been communicated to the press in Boston in 1837 by one of the survivors, a man named John Palmer, whom we believe joined the ill-fated ship as a passenger for its return journey to Limerick from St John, New Brunswick.

According to Peggy, the John Palmer account is quite rare, ‘I do think when I look at something like this what it really tells me is how little people have changed. It’s a story of somebody who had it pretty good but wanted to try something different and maybe it didn’t work out very well. But still that spirit of adventure was there. The fact that this was even published, that somebody really wanted to read a lot of details about that. To me, that speaks about this insatiable interest to hear these dreadful events that is pretty close to our current habit of doom-scrolling don’t you think? If you called this doom-scrolling of the past you wouldn’t be too far off.’

The John Palmer account and the testimony that featured in the Limerick newspapers were hugely significant and we were able to put these to great use in the documentary by dramatising elements of these first-hand accounts.

Perhaps one of the most interesting items came from a newspaper called the Limerick Star, which carried an editorial which criticised the cannibalism onboard the ship. This piece stands in stark contrast to the Palmer account, which argues that the men on board were in such a desperate and dishevelled state that they were left with no other option.

Therein lies the main crux of the documentary; the fact that there was a clash of old-world Victorian views, of doing what one had to do to survive versus the emergence of a new modernity, and a rejection of violence against one's fellow man. It could be argued that the story of the Francis Spaight marks a significant turning point in that moral journey - certainly in legal terms, at least.

While the story of the Francis Spaight has all but disappeared from Irish folk memory, outside Limerick at least, it has been popularised in American Literature by the author Jack London, who famously wrote a short story about the incident in his short story collection When God Laughs in 1911. More recently, the story of one of the cabin boys who was sacrificed, Patrick O’Brien, was the subject of a musical entitled The Unlucky Cabin Boy by Limerick playwright Mike Finn in 2014.

So why is it necessary to look back at such a gruesome tale? First and foremost, it’s important to remember those who died onboard the ship, as well as those who were driven to such extreme lengths in order to survive - many of whom, apart from Gorman and Spaight himself, never seemed to recover from the horror they endured.

But also it's important to reflect on the journey towards the more moral and less cruel society in which we live today and how the tale of the Francis Spaight’s fateful voyage in December 1835 helped hasten that journey. 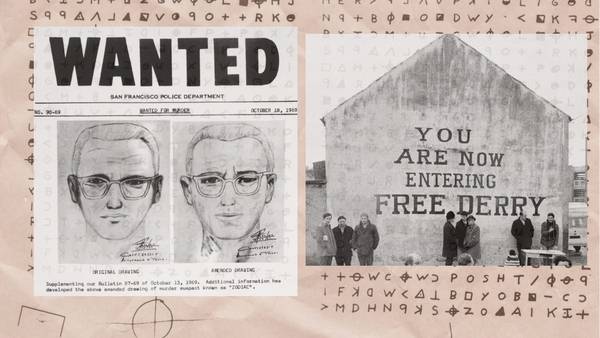 The Zodiac killer's Irish alibi - Documentary On One