For seven weeks the makers of GunPlot have guided listeners through 16 turbulent months of Irish history. The team at RTE Documentary On One have brought us across battlefields in Northern Ireland, along the corridors of government buildings and into the homes of those involved in Ireland's greatest political scandal.

But finally the event the series has been building towards has finally arrived: The trial. Dear listener, please remember that this is not the Trumpian era we find ourselves in today, this is 1970’s Ireland. The four men who stood accused of conspiring to import arms weren’t facing a slap on the wrist or a week trending on Twitter. If they were found guilty they could be locked up for five years.

This was not a simple case of guilt or innocence, it wasn’t just the accused parties who were on trial but the State. The British had only left fifty years previously, if the Irish political system crashed under the weight of this crisis it would call into question the validity of the entire State.

However, how does one shed new light on a court case that is over fifty years old? For the penultimate episode the narrators and contributors won’t merely describe what happened inside the Four Courts in the September of 1970 they will take us back in time.

So join me, won’t you as I delve into the second last instalment of Gunplot, where we find out what happened to Captain Kelly, Minister Charles Haughey, John Kelly and businessman Albert Luykx.

As you peruse this week's episode highlights there are two names, nay Arms Crisis experts you need to familiarise yourself with: David Burke, barrister and author of Lies & Deception and Michael Heney writer of The Plot That Never Was. But these men don’t just come armed with in-depth knowledge of the trial; they have receipts. Mr Heney did six years of doctoral research in preparation for his book, during this period he found tapes from inside the trial of 1970.

On top of this he will provide listeners with a bird's eye view of the jury room, yes Mr Heney is going to show GunPlot listeners how the jurors reached their verdict. The episode will include interviews with actual jury members from the case, and we will get to hear their opinions on who really reached for the gun. 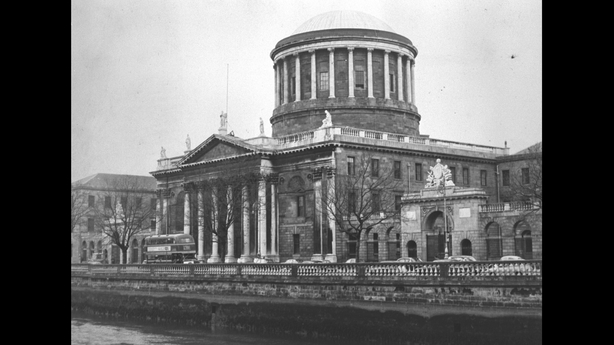 Throughout the series, it has been made evident that the events of 1969-1970 affected more than the men who stood trial. The Arms Crisis devastated the families who stood behind the accused. Jacqui Kelly, the daughter of Captain Kelly revisits the trial in this week's episode.

"A journalist asked me if I believed my father would be acquitted and I gave an emphatic yes. The next day there was a piece in the newspaper to the effect that I didn't really know what was going on."

Captain Kelly’s children were not the only children of the Arms Crisis who recall that period. Tom Hefferon the son of Colonel Michael Hefferon described the round hall of the Four Courts as intimidating, a "hellhole". He also shed light on what happened after his father left Adam and Eve’s Church on the morning of the trial (for reference please stream Episode Seven). 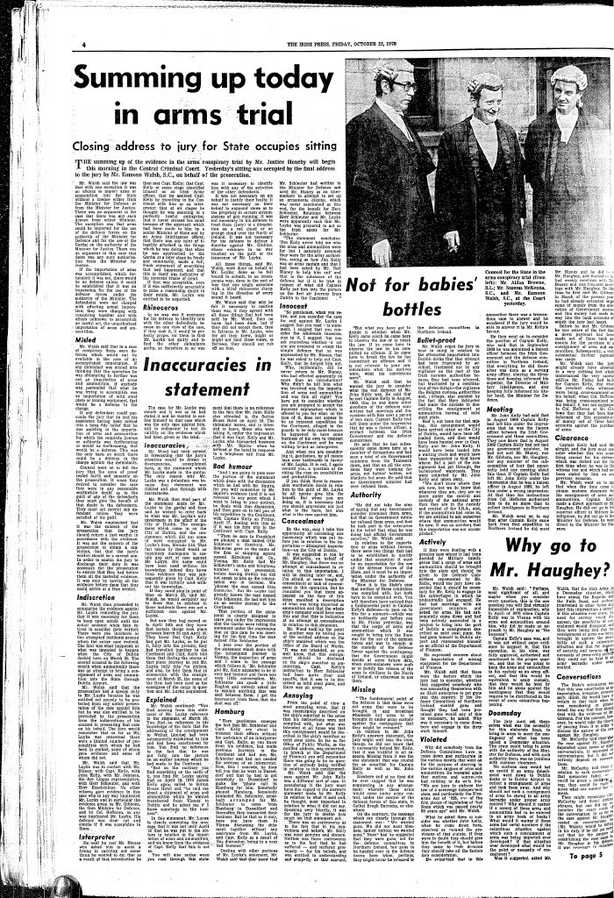 I’m On Your Side:

It is difficult to visualise what the courtroom looked like that day, but according to journalist Frank Kilfeather, it was "chockablock" with spectators. So much so that he "nearly had to beat the people out of the press box" and the courts service had to assign a second overflow court for the public.

This is the scene that Colonel Hefferon walked into before he stood as a witness for the Prosecution. But when he entered the Four Courts he made a beeline for one man: Frank Fitzpatrick. Mr Fitzpatrick was defending Captain Kelly and Mr Hefferon had a clear message he wanted to deliver: "I have to tell you that your client is telling the truth.". Mr Hefferon said to Mr Fitzpatrick that he had spent two hours in the Church that morning and would not perjure himself. But as a key witness for the Prosecution Mr Hefferon was supposed to help the State gain a conviction, not stroll up to the defence and declare "I’m on your side".

When it was time for the trial to begin the Prosecution rolled out their witnesses. The first person called upon was Minister for Defence, Jim Gibbons. He was the Prosecution's star witness as the Minister’s testimony could dictate whether this plot was legal or illegal. In essence, if he knew about the plan to bring in arms and didn’t prevent it, then it could be considered legal thus exonerating the accused. However, if he did not know about the scheme then the podcast's use of the words "illegal importation" is indeed correct. The Minister was adamant that he had no role in the importation plan, and had only recently become aware of what was going on.

But David Burke said something was slightly 'off’ in his testimony. The Minister said he had spoken to Captain Kelly about the failed mission at Dublin Port and the Captain’s future plans. "If this was a conspiracy, illegal to bring in weapons illegally by a rogue element of military intelligence, what on earth is he doing talking to Captain Kelly? Why didn't he pick up the phone and have him arrested?"

Things then went from bad to worse for the Prosecution as the next contender took to the stand.

When Minister Gibbons stepped down, retired Director of Army Intelligence, Colonel Hefferon took his place, and he had already decided to deviate from the Prosecution's script. Instead, he chose to switch sides and speak in favour of his former colleague Captain Kelly. He said he was not a crooked agent but an officer functioning under strict instructions, from his superior, the Minister and by extension the government.

The final witness of this dynamic trio is Peter Berry, the Secretary of the Department of Justice. Unsurprisingly he stuck to the testimony expected of him, but it’s not what he said that raised eyebrows but what he didn’t say. He omitted the conversation he had with Taoiseach Jack Lynch about the arms conspiracy.

The cross-examination of Mr Berry by the Defence would be a turning-point in the case. He was asked by Ernest Wood, the barrister for the Defence, if he had written a character reference for Albert Luykx the previous year to allow him to return to Belgium. Mr Berry agreed he had done so and Mr Wood sat back down. But Mr Berry wasn’t finished; he elaborated and asked the judge if he could illustrate the reason behind the letter. Mr Berry proceeded to explain that the letter was written because the Belgian authorities were against Mr Luykx’s to return, as he had been accused of "Neo-Nazi activities".

After this stunning proclamation, the Defence went on the attack objecting to the use of such personal details in court. But in fact the confession provided them with the perfect opportunity to shut down the Prosecution, literally.

The Defence Barrister Mr Wood said the judge’s willingness to allow Mr Berry to divulge such information was evidence of the unfair way he was conducting the trial. The judge abruptly left the bench and adjourned for lunch. On his return, he announced that the jury would be discharged. In just six days the trial had collapsed.

Put It On Tape:

After a few weeks, a second trial and a new judge were arranged. Once again people poured into the courtroom and an overflow court was required. A public address system was set up to link the proceedings from the main court to the overflow area. But on this occasion, the public address system was hooked up to a tape recorder. The transcripts of the Arms Trials are missing and just two court recordings remain, but with the help of Michael Heney, the GunPlot team have managed to get their hands on these two priceless artefacts. 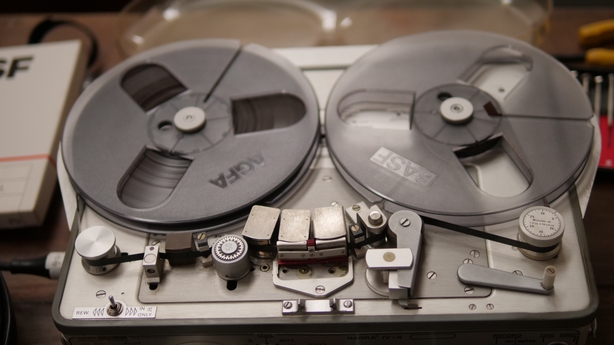 But this wasn’t the only historic moment in the witness box in September 1970. When Belfast Republican John Kelly took to the stand he decided that he would not testify, but instead would make a speech. He spoke of his family, the Troubles and life as a young man in the IRA, by the time he concluded the court had erupted into applause. But he never gave any evidence, he laid bare his truth and stepped out of the box.

The tapes provided by Michele Heney allow listeners to be transported back in time. A prime example of this is the cross examination of Captain Kelly. The listener can hear the staccato edge in his voice as he releases tightly-worded answers. In the words of Michael Heney, you can imagine him "hunkering down in the witness box" refusing to allow the State to manipulate him "giving just enough". For the Prosecution to comfortably win their case they needed to eviscerate Captain Kelly’s testimony, but Captain Kelly proved to be too much of a challenge.

When Captain Kelly’s cross-examination was complete it was time for the Defence to put forward their case for Minister Charles Haughey. The barrister Peter Maguire prepared to pounce. Minister Haughey was the main attraction for the public, yet his party effectively exiled him during the trial.

The courtroom held its breath when the time came for Minister Haughey to give evidence. He had gone from a man with a blossoming political career to one facing imprisonment; his testimony would seal his fate. Minister Haughey never dismissed that he knew there was a plot afoot he just claimed he didn’t know it involved guns.

The trial seemed to be going well for the Defence, but as Minister Haughey stepped down the judge made an announcement that could topple their winning streak…..

The judge wanted to tell the jury that the arms could not have been used by the Defence Forces. By doing this he would have uprooted the Defence’s argument. A 40-minute spat ensued between the judge and the Defence. The Defence argued that Captain Kelly would have guarded the arms and kept them under his control. But did Captain Kelly’s control translate into army control?

By the conclusion of this verbal tussle, the judge agreed it was not his place to intervene. Now, it was time for the final round of this gunfight: the jury's deliberation.

Both sides made their closing speeches and the jury retired to decide the future of our four protagonists. Would they be declared guilty or not guilty? Well, you better stream Episode Eight of Gun Plot to find out.