It was Friedrich Nietzsche who said, "all I need is a sheet of paper and something to write with, and then I can turn the world upside down". This week's episode of RTE Documentary On One's GunPlot will prove that the German philosopher's thesis was correct.

In Episode Seven that infamous note you’ve heard so little about will offer a lucky journalist the scoop of the century, create cross-party warfare, and lead to the arrest of several key players in the Arms Crisis. There will also be a side helping of childhood traumas, distorted witness statements and politicians brawling in the streets. We warned you that the Arms Crisis was anything but boring.

So, once more sit back, plug in and allow narrators Nicoline Greer and Ronan Kelly to take you back to 1970 and the birth of Ireland’s most unforgettable political scandal.

To get you up to speed on this week's installment, please enjoy a bite-sized morsel of episode highlights. And don’t forget you can still watch GunPlot the tv documentary by RTE Factual on the RTE Player.

Last week's episode concluded with the Garda Special Branch swarming Dublin Airport as they waited to intercept an illegal consignment of weapons coming from Vienna. This was the fifth time the Irish government had tried to obtain black market guns. Did they finally make it to the Emerald Isle? No, not while Peter Berry, secretary of the Department of Justice (see Episode Four) was on the prowl.

When Minister for Finance Charles Haughey got word that the Gardaí intended to seize the arms he rang Mr.Berry. The Minister had already arranged for the shipment to be cleared by customs and didn’t take kindly to the interference, but Mr. Berry was an ardent disputant of the IRA and refused to back down.

The Minister suggested that the delivery be sent straight to the North, but that idea was shot down.

He eventually agreed to halt the operation using three carefully selected words "Whatever it is". Why does this phrase hold such weight? Because it implied that Minister Haughey had no clue what was in the consignment. 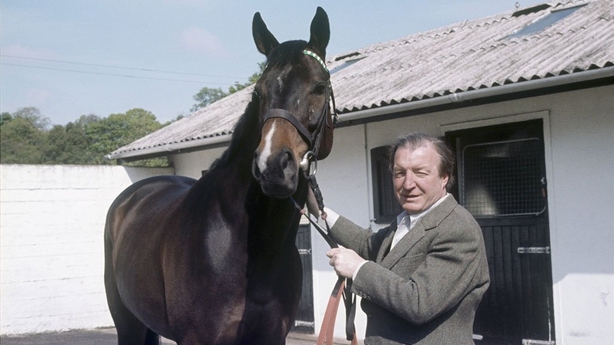 After the (final) importation scheme is called off Captain Kelly, John Kelly and Albert Luykx return from Vienna. They had been there to arrange for the consignment of arms to be sent to Ireland. It was Budget Day, but the Minister for Finance Charles Haughey was detained. He sustained a fall from a horse and was brought to hospital mere days after his phone call with Peter Berry. Despite his explanation for the black sling and hospital stint, the rumour mill churned out a few more colourful tales about his accident…...

The next day Neil Blaney called an emergency meeting as he discovered the Gardaí were investigating the plot to import arms. The attendees included Captain Kelly, Minister for Defence Jim Gibbons and Colonel Hefferon. The Colonel was a strange addition as he had reached retirement age and had left the Army. In the words of his son Colm Hefferon, "he really shouldn’t have been involved at that stage".

But the person who would be most impacted by this discussion was Captain Kelly. In the words of Minister Gibbons, he was now "on the hot seat". Captain Kelly would later remark that he knew then that Minister Gibbons was "playing some game," and it appeared he was the target.

When Colonel Hefferon retired, his role was taken up by a man named Colonel Delaney. But when Colonel Delaney found out about his predecessor's arrangement with Captain Kelly he was horrified; and immediately reported the matter to Minister for Defence Jim Gibbons.

As tensions built Captain Kelly knew he had to take action, and so after lengthy discussions with his wife, Sheila he decided to leave the army.

Peter Berry was dissatisfied with the government's handling of the crisis and wanted to put a stop to the reign of Ministers Haughey and Blaney. So, he took his concerns to an outside source: the President of Ireland. Now, at this time, Éamon de Valera was the master of Áras an Uachtaráin, he also happened to be the founder of the political party that was in government. He offered Mr.Berry some sage advice- "If you don’t trust his Minister, you can go directly to Jack Lynch".

Mr.Berry agreed and sought counsel with Taoiseach Jack Lynch. The Taoiseach knew if the scandal broke it could cause a diplomatic furore between Ireland and Britain. He spoke with Minister Blaney and Minister Haughey and asked if they were involved in an attempt to bring in arms. They denied any wrongdoing, and the Taoiseach took them at their word.

The Scoop Of The Century:

While those involved in the Arms Crisis remained tight-lipped across Dublin, a political correspondent for the Sunday Independent was about to get a career-defining scoop.

Ned Murphy received a tip-off that came in the form of a note. I’m sure faithful readers can guess what it said: "A plot to bring in arms from Germany worth 80,000 pounds has been discovered". Sadly, for Mr.Murphy his editor refused to run the piece; it seemed that the stability of Ireland’s democracy took precedence over a Pulitzer. However, Mr. Murphy wasn’t the only recipient of that explosive scrap of paper…...

On the first of May 1970, a Garda Inspector named Doocey appeared at Captain Kelly’s door with a warrant for his arrest. His children recounted their memories of that day: "I remember my mother, Sheila, holding her hands to her mouth, almost silent, fear in her eyes, I knew something was wrong." his son Peter recalled. A few days after Captain Kelly’s arrest, his son Justin turned five.

Captain Kelly refused to offer a statement to Gardaí until he spoke with Minister Gibbons. The Minister agreed to meet him, despite the unorthodox nature of his request (the Captain was under arrest after all). According to retired Chief Superintendent, John O'Brien, Minister Gibbons offered some "grandfatherly" advice - "do the right thing".

Captain Kelly’s day proceeded to get even stranger. He was then asked to speak with the Taoiseach. Captain Kelly got the impression that the Taoiseach had a job for him: to make him a witness against his Ministers - Neil Blaney and Charles Haughey.

As previously mentioned that infamous note was slipped to another source, the leader of the Opposition, Liam Cosgrave. Mr. Cosgrave set up a meeting with the Taoiseach to discuss the explosive accusations. There is no record of this meeting, but according to a colleague of Mr. Cosgrave’s, who was in his office, when he returned he said "it’s all true". A partially-correct statement; the information in the note was accurate, but the two leaders claimed only some of the names listed were involved.

During their confidential get-together, the Taoiseach and Mr.Cosgrave appeared to negotiate over the contents of the note. While they never spoke publicly about their conversation, Mr. Cosgrave only mentioned the names that the Taoiseach agreed to. So, while Colonel Hefferon and Minister Gibbons were saved, those who threatened the Taoiseach’s job security, Minister Haughey, Minister Blaney were left exposed, as was the junior Army officer, Captain Kelly.

Later that night, The Irish Times received a call at 2 a.m. from the Government's press office. They had a story they wanted the paper to use and a statement to go with it. It read: "three ministers are out of the government". The country was dumbfounded, and the Irish parliament was equally unimpressed…..

After the Taoiseach concluded his announcement about the Ministerial sackings it was debated in the Dáil. The discussion carried on for three days and nights, TDs hurled abuse across the floor at each other. It even led to fisticuffs along the corridors of Leinster House, in the words of journalist Frank Kilfeather, things "got very vicious". 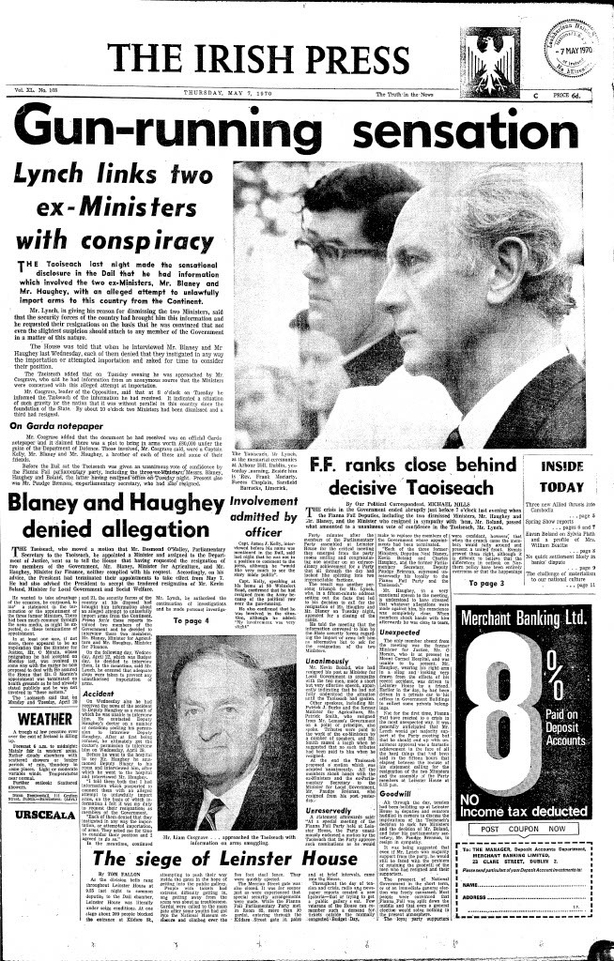 Taking Away The Da:

Taoiseach Jack Lynch assured the Dáil he would step back and allow the prosecuting authorities to take over the investigation. It just so happened that in1970 the prosecutor was appointed by the Taoiseach, he was the Attorney-General, and therefore a member of the cabinet. As May of 1970 drew to a close it was decided that only two Minister’s Charles Haughey and Neil Blaney would be charged with conspiracy to import arms. Captain Kelly was also charged along with Belfast republican John Kelly and businessman Albert Luykx (replay Episode Six).

On the day of his father's arrest, Eamonn Blaney said he knew that the members of the Garda Special Branch had a singular purpose to "take away the da."

The men now faced the charge of conspiracy to import arms, which carried a sentence of five years if convicted. 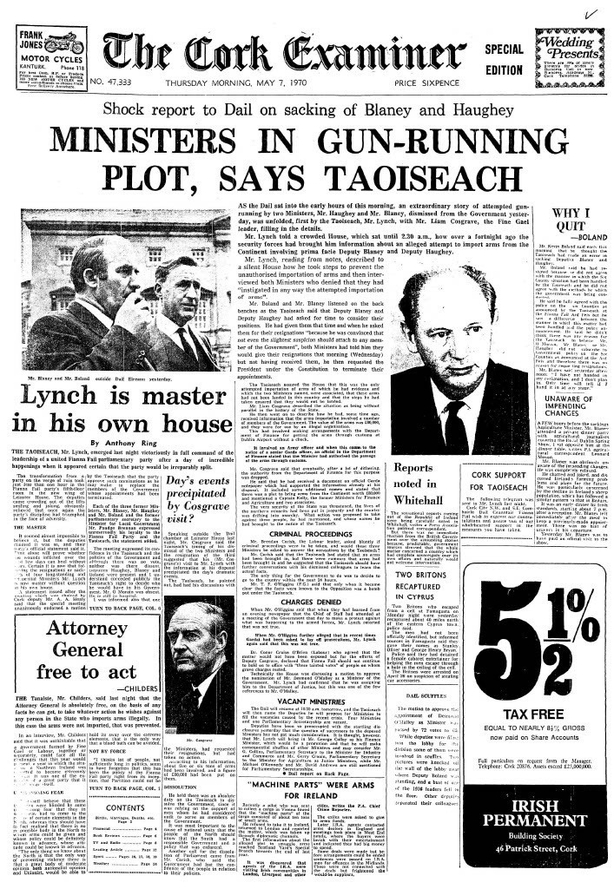 The 'Book Of No Evidence’:

Colonel Hefferon was interviewed by Gardaí as a potential witness for the Prosecution; he gave a lengthy statement, which included his dealings with Minister Gibbons.

The case reached the District Court and while Minister Haughey and Captain Kelly were shipped off to the Central Criminal Court Minister Blaney was exonerated. His barrister, Liam Hamilton convinced the court that his client was without fault. He went so far as to declare the Book of Evidence a "book of no evidence". In hindsight, Minister Blaney’s might have saved the government as Mr Hamilton remarked "he (Blaney) was going to lift the lid and he was going to really go to town on the whole shebang".

"Do The Right Thing":

On the day of the trial in September 1970, Colonel Hefferon found himself in a Church nearby the Four Courts.

Before the trial, he had received a call from Minister Gibbons who asked if Captain Kelly reported to him regularly. Colonel Hefferon was stunned and replied that Captain Kelly had always submitted his reports. But this exchange gave the Colonel the impression that Captain Kelly was going to be left to take the fall.

And by the time Colonel Hefferon’s witness statement reached the book of evidence, he noticed some edits had been made….. This gesture was a hint regarding how he was expected to behave in court.

In another call with Minister Gibbons, Colonel Hefferon’s son, Tom recalled the Minister said: "Now we know you will do the right thing, Colonel Hefferon ''. And this question of the "right thing" is what brought him to Adam and Eve’s Church right before the first day of the trial.

To find out what he did next you have to hit play on Episode Seven of GunPlot.