GunPlot explores one of the most extraordinary periods in Irish politics, which culminated in Charles Haughey and three others being put on trial for conspiracy to import arms illegally.

To tell the story, both the TV documentary and the podcast series, relied heavily on archive from the tumultuous period of 1969-1971. As the researcher on the TV documentary, I was charged with hunting down footage and images from the era which would help shed light on the complex and murky events of the Arms Crisis. 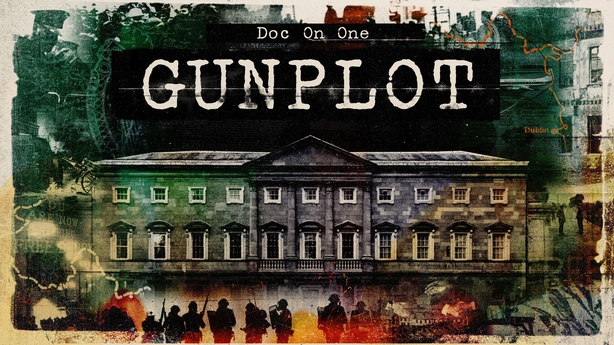 In the bigger picture, records and archive have three main functions in our society – evidence, accountability, and culture. In television, it helps us create a credible snapshot in time. Memories fade and we can never know what was said in private conversations, but we do have an indisputable record of what was said and done in the public domain.

We couldn't fit all the archives we came across into this project, so here are some of my favourite gems from the vaults...

Jack Lynch was Taoiseach in August 1969 when the Battle of the Bogside took place in Derry and violence spread to Belfast. The panic spread South and there was huge pressure on the Fianna Fáil government to help nationalists in the North. After a heated cabinet meeting, Lynch gave a live speech where he promised that the Irish government would "no longer stand by and see innocent people injured and perhaps worse".

The speech caused a sensation with rumours spreading in Derry that Irish troops were to invade The North. It’s one the most important speeches in North-South relations but more often than not, it is misquoted. Somewhere along the way, the most famous line in the speech gained an extra word – idly.

Lynch began to be misquoted early on in the aftermath of the speech and the "idly" part stuck. Unlike today, there was no 24-hour news cycle endlessly replaying clips, no internet to retweet the line from the speech a thousand times.

Arguably, not standing idly by gives a sense of intent to be active. When it comes to complex issues like the use of force in Northern Ireland and the difference between defence and offence, every syllable is weighed down with meaning. In political terms, the speech was explosive and even more so with a word inserted incorrectly.

Whatever Lynch may have been thinking or intending, the archive broadcast is indisputable evidence of what he actually said - watch below.

BERNADETTE DEVLIN WAS THERE...

While spooling through hours of news reports and archive footage from 1969, I was struck by the lack of women represented in the Arms Crisis and more generally in news coverage. There were only three female TDs out of 144 at the time and no female ministers. There are many complex and systemic reasons for the lack of Irish women in powerful positions in 1969 (the short version is - The Patriarchy).

However, there is a significant amount of coverage of one woman, Bernadette Devlin (later Bernadette McAliskey). She was a leader of the Irish Civil Rights movement from Derry. She became the youngest ever MP in Westminster when she was elected on the socialist Unity platform in 1971, aged just 21. Her passion and charisma were captured in many news reports, including these clips from inside Free Derry.

You can see more clips of Bernadette here, via RTÉ Archives.

WHO WAS GERRY JONES?

When making this programme, I was frequently asked "who was the guy with the eye patch?". In much of the archive footage of the Arms Crisis, a man with an eye patch appears outside the courts at the side of the defendants. He is a tall man with a fine head of hair and a black eye patch on his right eye. His name was Gerry Jones. The Jones Brothers (Gerry, Christopher and John) were successful businessmen and Gerry was a member of the Fianna Fáil national executive. He was also involved in TACA, the fundraising arm of Fianna Fáil, and a supporter of a united Ireland. Omnipresent in the TV and newspaper reports of the Arms Crisis, he was referred to as "Blaney’s Shadow" in political circles following the trial. When the Public Accounts Committee looked into the financing of the failed arms attempts in 1971, Gerry Jones appeared before them to discuss how the relief fund was distributed. Despite his peripheral involvements in events, he has become one of the enduring images of the crisis.

THE TRUTH BEHIND HAUGHEY’S ACCIDENT...

The Arms Crisis came to public attention on May 6th 1970 but in the weeks leading up to it, Charles Haughey had bigger problems to contend with. As Minister for Finance, he was due to present his budget to the Dáil on April 22nd 1970. But that morning he had a serious accident and ended up in hospital. His boss, Taoiseach Jack Lynch, had to step in at the last minute and deliver the budget himself.

The accident made it difficult for Lynch to have the urgent and explosive conversations required with Haughey. Lynch did visit Haughey in hospital, what was said between the two men we will never know for sure.

Rumours and salacious gossip surrounded the details of Haughey’s accident. Haughey’s election agent, Patrick O’Connor, tried to put an end to the rumours by inviting the press to Haughey’s Abbeyville stables where the accident took place. The press conference included a reconstruction of the events - watch below.

Eagle eyed Arms Trial nerds can even spot Michael Heney in the press gaggle. Michael wrote the recent bestseller The Arms Crisis of 1970 – The Plot that Never Was.

GO INSIDE THE COURTROOM...

There were two Arms Trials – one in September 1970, which collapsed after a week after an unfair allegation was made about the judge, and a second trial in October 1970.

Documents in the National Archives show that Judge in the first trial, Mr Justice Aindreas O’Keefe, ordered that the trial be recorded due to its controversial nature and the likelihood that disputes would arise. When the first trial collapsed and Mr Justice Henchy took over the second trial, the recording continued. It was the first time this was done in Ireland.

After the trials, the tapes were deemed superfluous and as an afterthought, some were given to Peter Maguire who represented Charles Haughey. We don’t know where the rest went. Maguire retained two quarter inch tapes in a vault in Bank of Ireland and they had not been heard in public until now.

Extracts from the tapes features in both the podcast and TV documentaries. Here is a longer clip of Captain James Kelly being questioned by Seamus McKenna, senior counsel for the State:

THE TWO RARE BOOKS THAT GO INSIDE THE TRIAL

For people particularly interested in the trial element of the Arms Crisis, the best records available are in print as, like today, cameras were not allowed into trials in Ireland. And without the complete tapes available, we relied on two rare books which examine the proceedings in detail. For those after forensic, in depth transcripts and analysis, Angela Clifford and her tome The Arms Conspiracy Trial of 1970, is your woman.

Tom McIntyre's book Through the Bridewell gate is still the best one of the best contemporary reads on the #ArmsTrials pic.twitter.com/oaC7UiWDk1

The trials are also the subject of Through The Bridewell Gate by playwright and writer Tom MacIntyre. He gives all the nuts and bolts of the trial but also offers his personal observations and it was his book that brought the saga to life for me.

Below, MacIntyre writes after the first trial hears from Council for the State...

There can only be one interpretation - the prosecution line is "Gut Haughey, and gut him fast". It is war to the finish from now on. Richard Crookback prowls The Four Courts, and woe betide the loser here for bloody dreams are nigh, bloody autumn days...

MacIntyre's description of John Kelly, one of the four accused men...

A stocky build, dark, boyish, in his mid thirties. Belfast IRA, and with a long prison stretch to his credit for activities in the campaign of the late fifties. An intriguing mixture of gentleness and toughness, the ghetto in his lineaments - defiance, durability, humour, and in anger the eyes curling to ice, then past ice to stone.

The jury retires to consider their verdict...

At 3:38pm the jury retire - and it's quite impossible to read them at this point - some look like bridegrooms, others look as if they're about to be shot, and, anyway, there's too much gamble in the air, every sound the sound of falling dice.

Both books can be found on rare bookshops and in some libraries (thanks to Michael Talty in RTÉ Archives for the copy of Through The Bridewell Gate, and sorry Michael that it is long overdue).

THE UNTOLD LEGACY OF THE ARMS TRIAL...

News reports of the time don’t reveal the personal anguish that families went through when their husband or father was thrust into the public eye. Intense scrutiny comes with the territory for politicians, but their families and the families of the others involved in the Arms Crisis, also had to live with the fallout. In 2018 Suzanne Kelly, one of Captain Kelly’s children, spoke to the late Marian Finucane about the effect the Arms Trial had on her family. In the powerful interview she spoke about her father’s death and how he waited until the end for an apology, which never came.

Watch GunPlot here, and listen to GunPlot: The Podcast here.