While this year has kept us inside more than ever, it has also provided the ideal opportunity to catch up on all of the great television series that have been released.

Television has really provided something for everyone this year and now RTÉ Culture brings you a list of the must-watches before we head into 2021.

I May Destroy You

I May Destroy You is undoubtedly one of the best tv series that 2020 has to offer. The show was created, written and co-directed by Michaela Coel, who also happened to play the main character, Arabella. While the show feels reflective of the modern millennial experience in many ways, it also delves into darker issues surrounding matters such as rape and sexual assault and the toll that these matters take on victims. Although it explores a difficult subject matter, I May Destroy You is littered with comedic moments that are both uplifting and highly entertaining. I May Destroy You is a highly ambitious and radical piece of television, delving into topics such as race, gender, class, abuse and trauma while also containing a message of hope - that things do get better. If you don't have any pressing matters at hand, prepare to watch this entire series in one sitting. I May Destroy You is currently available to watch on Hulu, BBC iPlayer or to rent on Amazon Prime.

Normal People is of course one of the most memorable pieces of television to premiere this year. While most people devoured every episode of it throughout the initial coronavirus lockdown in late April, for those who haven’t yet seen it, consider it mandatory watching. Paul Mescal and Daisy Edgar Jones star as the characters of Connell and Marianne, navigating through the tricky territories of love and friendship in a highly intimate and emotionally charged way. Based on the best-seller novel by Sally Rooney, Normal People will have you reaching for the tissues and cursing the reality of relationships. Normal People is still available to watch back now on RTÉ Player.

RTÉ's latest comedy follows a well-known memorial photographer (Michael Smiley) in victorian-era Ireland as he is dragged into a series of murders that appear to be related to his work. The show is both quirky and different, and the perfect show to watch if you’re looking for some Sherlock-esque entertainment on these long, dark winter evenings. Catch up on RTÉ Player.

Both chess-playing people and non chess-playing people alike can agree upon the sheer brilliance of The Queen’s Gambit. From the impeccable acting by Anya Taylor-Joy as the chess prodigy, Beth Harmon, to the stunning wardrobe and recreation of 1960’s America - it’s a compelling production. Initially I had my doubts, having never been particularly drawn to the charms of chess, but one episode is enough to get a person hooked, feeling emotionally invested in the successes and failures of this young, and notably female, chess mastermind. The Queen's Gambit is currently available to watch on Netflix.

Mrs America is a miniseries loosely based on the fight between author and activist Phyllis Schlafly and the second wave movement of feminism as she led a campaign across the US in the 1970’s against equal rights. Mrs America highlights both sides of the feminist movement whilst documenting the prevalence of misogyny within US society at the time. One of the most telling part of the series is that Phyllis (played by the incomparable Cate Blanchett) doesn’t come across as a villain or total enemy to women everywhere, instead she provides context as to why there was such a struggle for equality in the first place. Mrs America is available via RTÉ Player.

This year it has become more trendy than ever to watch foreign language films and television series (with subtitles, of course) and Dark is a shining example of a show that will make you forget that you don’t understand a word of German. Dark is set in a small town with an eerie nuclear station holding a multitude of dark secrets, so prepare yourself to encounter time travel and alternate universes alongside complex personal relationships and interesting family dynamics. While Dark isn’t what one would consider light watching, it is certainly both compelling and entertaining. Watch Dark, season 3 (along with the first 2 seasons) now on Netflix.

It’s not very often that a TV series comes along that holds a candle to Breaking Bad, but Ozark is one of them. Exploring the lives of a seemingly normal family as they get mixed up with the Mexican drug cartel, they must find inventive ways to appease the cartel and most importantly, keep their lives. Released earlier this year, the third season of Ozark is full of both shocks and plot twists, making it a highly entertaining show that will keep you on the edge of your seat and that will blur your perception of good and evil. Watch Ozark now on Netflix.

Unorthodox is a gripping miniseries made by Netflix, documenting the story of a young ultra-Orthodox Jewish woman as she flees from the path set out for her - that of an arranged marriage and a stifling religious community. Esty, a 19-year-old Hasidic jew, played by Shira Haas, flees from her small community in Williamsburg, Brooklyn to the German capital of Berlin where she intends on starting a new, secular life, free from the confinements and pressures of religion. Unorthodox is a truly inspiring series that feels like a coming-of-age story of sorts. Most of all, it is a message of hope and highlights the bravery it takes to start all over again.

It would be surprising to find a single person who has not become acquainted with the character that is Joe Exotic this year. The Netflix documentary Tiger King feels like one of the series that most defined the initial coronavirus lockdown, providing everyone with boundless entertainment and a form of escapism into the faux-safari existence of Joe Exotic and his wild animals. Tiger King is a total roller coaster of emotions and shock factor from start to finish, equipped with everything from wild animals to arson, murder and weird cult-like groups. For those who are very late to the fad, it is not one to miss.

Zoe Kravitz stars as Rob, a pop culture-loving record store owner in the hit series High Fidelity. The series is a reimagination of the 2000 movie starring John Cusack, which is based upon the novel by Nick Hornby. Now the story is being told from a female perspective in an uber-cool portrayal of heartbreak, swapping 1980’s London for today’s Brooklyn. Despite receiving critical acclaim, the series has not been extended for a second season, making it a short but sweet watch. High Fidelity is available to stream now on Hulu.

For fans of American basketball, or even just sports in general, The Last Dance is a captivating miniseries documenting the life of NBA player, Michael B. Jordan. With storytelling that is both detailed and performative, you will find yourself captivated by the life and career of Michael B. Jordan, from his once-in-a-lifetime talent to his personal life and the hugely successful brand he created using his own name. This miniseries, which is more so a love letter to sport than anything else, is available now to watch on Netflix.

Heavily inspired by the works of horror writer, HP Lovecraft, Lovecraft Country details the story of Atticus Black who embarks on a journey across 1950’s Jim Crow America in search of his missing father. This series seamlessly melds together the horrors of racial injustice with the supernatural, making it an all consuming watch. Produced by Jordan Peele, acclaimed for his horror works Get Out and Us. Lovecraft Country is available to watch now on Hulu or via Sky On Demand.

The Haunting of Bly Manor

The Haunting of Bly Manor has been a big hit for Netflix this year, serving as a sequel of sorts to The Haunting of Hill House, released back in 2018. Luckily you don’t have to have seen its predecessor to understand what is going on in The Haunting of Bly Manor. The series is heavily inspired by the works of American author Henry James, primarily his horror novella, The Turn of the Screw, and follows an au pair looking after two orphaned children in an eerie, haunted mansion. And yes, it's really creepy.

The Baby-Sitters Club is a series remake of the book by the same name by Ann M. Martin. The series is a light-hearted comedy drama about a group of teens who start their own babysitting service. For many who watch the series, it will spark a childhood memory of reading those particular books, making it the perfect, easy watch for both children and adults alike! The first season of this series was such a big hit this year that it has already been renewed for a second season. Stream The Baby-Sitters Club on Netflix now.

Created by Phoebe Waller Bridge of Fleabag fame, Killing Eve is a series based upon a game of cat and mouse between a highly intelligent MI5 security officer, Eve, and Villanelle, a talented killer/psychopathic assassin. It's both a refreshing and entertaining series, with two driven women who are equally obsessed with each other as the main characters. The show hits every nail on the head with the perfect amount of thrills, glamour, shocks and humour. All three seasons of Killing Eve are available to watch on RTÉ Player. 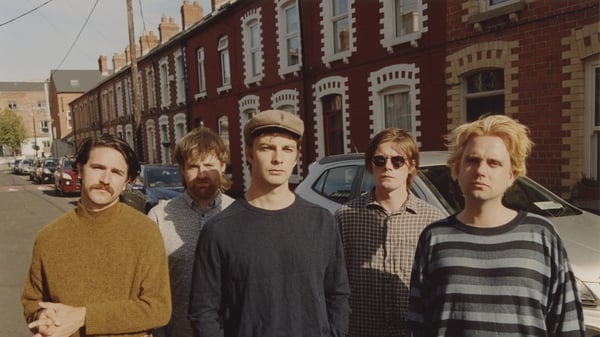