TThe Lyric Feature: Over Nine Waves takes a look at one of the most mysterious poems in the Irish language and the ancient legend in which it appears, in the company of artists, poets, musicians, singers and academics.

Producer J.J. O'Shea writes for Culture about the strange magic of The Song of Amergin - listen to The Lyric Feature: Over Nine Waves above.

The Song of Amergin has its origins in pre-Christian Ireland, and the legend says it was spontaneously uttered by Amergin, the sailor poet-prince of the Milesians as he stepped from his boat and placed his right foot on the shore of Ireland for the very first time. It is a powerful litany that somehow conveys a sense of the mystical and cosmic expressed through simple everyday images of the natural world.

Some works of art seem to offer layers of meaning while remaining a mystery at their heart.

Some works of art seem to offer layers of meaning while remaining a mystery at their heart. The Song of Amergin is a powerful litany of short lyrical phrases that somehow convey a sense of the mystical and cosmic couched in simple everyday images of the natural world. And the legend which accompanies The Song of Amergin only adds to the mystery and pleasure. This poem, with its origins in the ancient world, lays claim to be the first poem in the Irish language because it’s said that it was the Milesians who first brought the Irish language here. The story tells how, in the mists of pre-history, long before Christianity had arrived in Ireland, the song was spontaneously uttered by Amergin, the Milesian sailor poet-prince as he stepped from his boat and placed his right foot on the shore of Ireland for the very first time.

The legend says Amergin and his brothers came to Ireland in order to avenge the death of their comrade Ith, who was murdered by the jealous Kings of the Tuatha de Danann. It goes on to tell us of Amergin`s adventures in Ireland and how he was obliged to take his boats back out "beyond nine blue waves" as this was considered the rightful mode of invasion and how finally he was able to defeat the Tuatha de Danann by the use of his superior skills. At the centre of the Milesian legend is The Song of Amergin, in which the poet claims affinity with the wind and the waves, with the hawk and the deer and with the sparkling dewdrop.

This poem, with its origins in the ancient world, lays claim to be the first poem in the Irish language...

I was curious about the background to both the poem and the legend. The earliest written version of the story that has survived occurs in the eleventh-century manuscript The Book of Invasions and I wanted to know more about the monastic scribes who compiled that collection of pseudo-histories and why they chose to preserve a story with no obvious Christian connection. I met with Professor Kelly Fitzgerald of UDC who has a particular interest in early Irish literature and she explained how the Irish monks took pride in their ancient heritage and, unlike their continental contemporaries, wrote in Irish as well as in Latin which was the official language of the church.

The programme opens with the poet Paddy Bushe reading his translation of The Song of Amergin from the Old Irish. Paddy also shows how some of the place names in the Waterville area relate to the Milesian legend and how elements of the Milesian story persisted down the centuries in South Kerry.

I was also curious as to how others responded to the poem. Teacher David Ellison and folklorist Billy Mag Floinn speak eloquently of their personal response to the poem and the sculptor and traditional boat builder Holger Lonze reveals the thinking behind his sculpture dedicated to Amergin and the Milesian myth that stands on Waterville shore. Holger also considers how the Milesians might have navigated their way to Ireland without the use of the technological tools that were not developed until medieval times.

Given its title I think it’s fair to assume The Song of Amergin was originally performed as a song and unsurprisingly it has inspired several musical settings. I couldn`t resist the temptation to put it to music myself. After translating the poem into rhyming couplets I set it to a new melody. Charlie O`Brien sings the song and various arrangements of the melody played by harpist Reidun Schlesinger, guitar player Paul de Grae and piper and whistle player Barry Lynch are woven into the narrative.

Two unaccompanied songs, My Love was a River sung by Muireann Nic Amhlaoibh and Birds on the Same Tree sung by Emma Langford are also included. They felt like a good fit, because both songs use images drawn from nature to convey something beyond nature. I have also included Arvo Part`s setting of the Deer`s Cry, the prayer attributed to St. Patrick, which seems to carry an echo of The Song of Amergin.

Paula Meehan concludes the programme with excerpts from her poem Meanwhile back at the Rath, which is her lyrical and "argumentative" response to The Song of Amergin to which Mark Knight provides ambience with the unique sound of the hand-pan drum. 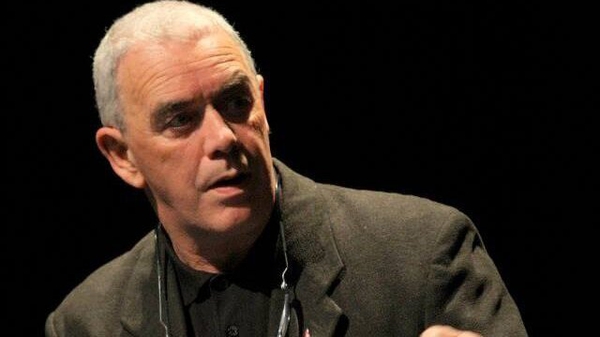 Lyric Feature: Theo Dorgan on the tale of Sappho's Daughter