From the shortlist of ten for this year's RTÉ Short Story Competition: read Tactics by Andrew Maguire...

A shebeen, a challenge to a game of pool, and a teenager playing to win...

Wojciech's Dad will moan about the petrol price involved in driving him across bad country roads like this, so despite the rain Wojciech will hop out of the van, pull his hood over his head, tuck his snooker case under his arm, and run up Shaun’s lane. He’ll skip carefully onto the lawn, fast but not so fast as to slip on the trampled grass, and scamper around the side of Shaun’s house, until the whitewashed stonewalls and the rusted tin roof of the shebeen behind come into view, seemingly small and abandoned beneath the heavy rain. He’ll be soaked already, so he’ll keep his head down, grip the case tight, and sprint until he’s within reach, then try to slow: slow, skid and slam into the door of the shebeen, which nevertheless will feel locked. So he’ll shunt it, one, two, three more times with his shoulder, the rain unbearable on his face, and on the fourth shove it will burst open, and all eight men on the inside will turn and Shaun, all the way over in the far corner, will say: sure look at that there then, here’s the young lad now.

The shebeen will begin to fill and men will rub their hands together and exhale a week’s worth of tense, warm air, while Shaun opens the fridge and hands out cans of Carlsberg and Guinness in exchange for single coins, and music – low and gentle to start, Raglan Road and The Town I Loved so Well – will whisper from a speaker in the corner. Smoke will hang in every crevice, particularly noticeable beneath the lights of the snooker table, because most of the men will be smoking, but more than this: the smoke never leaves, has been steadily accumulating for years, swirling and surviving within the walls.

One of the men, probably Barry, will ask: will we get things started then? And although half the men will have brought their own snooker cue, it will be Wojciech, unique in youth and keenest of them all by a mile, who goes to the table to set the balls up. The men will settle on playing doubles, start to pair off into teams, and Gerard, who talks aloud the way a person might dictate a memo, will suggest that someone text Giggsy, to see if he'll be along anytime soon.

More people will arrive and the shebeen, which has stood on Shaun’s land for longer than any of them remember, will start to feel crowded, like there’s a finite amount of space. Young lads will turn and bump into things like the four-foot-tall Guinness Toucan that’s been there since before they were born and say who in God’s name put that there? While Ciaran, with his pre-purchased bottles of craft ale, will stoically accept the abuse he gets from the Guinness drinkers, before going into the side room, where the TV and the Xbox will entertain the younger lads more than the snooker. Some of the old boys, maybe three times their age, will stand, can in hand, and watch them play Pro Evolution Soccer as though the graphics onscreen are as odd and dramatic as anything they’ll find on a snooker table or a football pitch, or anywhere else.

Giggsy will arrive and he’ll be the boy they look to on the table: the local star of the baize. But Wojciech will take his share of praise too, acknowledgement that he’s getting better every week, the suggestion that maybe he’s even the best of the lot now, which Giggsy will take in good spirit, for the most part, though he’ll also say: come back to me when he has the trophies to prove it, and some of the men will laugh and Wojciech will smile, but only when he’s sure no one is looking.

They’ll laugh and talk and play and roll and smoke and drink and so there’ll be fifteen of them, all told, in the shebeen by the time ten-thirty hits.

Drinks will be poured into glasses purloined from bars across the country and drank at tables that have ironic reserved signs which are equally as stolen, and although these things will be invisible to most of the men, Wojciech will continue to pay attention to them all. The portion of the wall lined with street signs, one of them apparently from Dublin; the posters of musicians and sports stars with autographs that aren’t quite believable; the coasters mentioning drinks and towns he’s never heard of; and the photographs of the same people in the same room, twenty years before, looking impossibly different. Wojciech will see these things and these people and decide that nothing arrives at Shaun’s shebeen without having been to an awful lot of other places first.

By eleven o’clock the drink will lead everyone into big conversations in small groups and all the while Wojciech will be listening, hearing things like young Turlough telling Mr O’Mallachy that his brother is teaching in Qatar and Mr O’Mallachy hearing it as teaching guitar and Turlough not bothering to correct him. The rain will keep coming and a leak will start in the roof and some of the lads, Wojciech included, will move fast as Wimbledon Ball Boys to lift the Coors Light bucket by the wall and hang it from the nail, so the water spatters in like a ticking clock.

The snooker will get better, beer lubricating things nicely, but loosening vocal cords too, so that Giggsy, who won’t have won a frame yet all night, will have taken to reminding everyone who he is: The Godfather of the local snooker league, the one who could have gone pro if he’d stuck at it, the one who was beat in the semi-final of the national amateur championships in ’98 and doesn’t like to be reminded of the fact but has no problem reminding people himself. Wojciech will try not to laugh.

The music will get louder, voices singing along to The Irish Rover and Fields of Athenry, taking liberties with timing and lyrics, and TV will replace the Xbox, substances making watching easier than doing, and when Who Wants To Be A Millionaire asks who created Fawlty Towers the young lads will shout out to the old boys, and when they’re able to shout back the answer this will unite the whole place as much as anything else.

Wojciech will beat Giggsy for the third frame in a row and Giggsy will finish another can and no one else will come to the table, so Wojciech will look at him and say: are we going again then?

Giggsy will say: aye, but let’s make it interesting, and set a fiver down on the table. Wojciech will smile and set his own fiver beside it. And Marty will look across and take notice and say: oooooh, here we go then.

Newcomers will arrive still, having left pubs for the no-license-no-closing-time shebeen. They’ll shake their hooded heads like dogs, dripping rainwater, and as they sit down, close to midnight, more attention than ever will be on the snooker table.

Giggsy will empty another can, his eighth of the night, and slur his words like: this lad is getting all the wun of the ball. He’s wobbing me blind.

So Gareth will say: Jesus Giggsy, your drinking is as bad as your snooker.

And Giggsy won’t like that, so he’ll take a fifty note from his pocket and set it down, saying: Let’s see what the wee fella is like when the pressure’s weally on.

Shaun will let out a short bark of laughter from behind the bar – a single, nervous exhale of air – before asking: you’re hardly serious? And Giggsy will say: I am, and Wojciech will say, with a confidence no one will have expected: I’ll play for as much as you like. And there’ll be a divide in the Shebeen that has never existed before.

Wojciech will step into the side room and those in support will stand with him and say it’s just like Giggsy, isn’t it, having to be right, having to have it his way, having to prove himself, and prove himself to who anyway, who’s he proving anything to?

While the older crowd will comment on how Wojciech really didn’t have to go on like that. I mean like that, playing them trick shots the way he did. And just right if he gets caught out now, as well he could be, because Giggsy is capable. Bad night or not, he’s well capable.

Shaun will grow concerned that this will all precipitate some sort of disaster. There’ll have been no mention of violence when he says: there's never been a punch thrown under this roof and there won’t be tonight, so if you’re doing it do it right.

So there’ll be two little stacks of cash on the table: Giggsy’s fifty, Wojciech’s notes to match, and a mix of twenties and tens and fives that each of the respective groups, divided somewhere around age thirty-six, have put in to support their man.

Shaun will gather it all in, put it in his pocket, set up the balls and say something like: May the best man win, I suppose.

Wojciech and Giggsy will shake hands and Wojciech will break off, striking the white and sending it down the green baize, towards the pack of fifteen reds. It will accelerate forward until it hits the outermost red at the perfect angle and spins away, bouncing off two cushions and running back up the table, coming to rest not far from where it started.

The men will clap but for the most part be quiet; chairs will start to feel squeaky, men will hold gulps of beer in their mouths, suddenly fearful of their loud glands.

Giggsy will hit his shot, aiming the white at one of the loose reds at the bottom of the table. But he’ll play it badly; immediately let out a long sigh. And someone will whisper in Wojciech’s ear: come on now lad, here’s your chance.

Wojciech’s Dad will go to bed. Wojciech will put two slices of bread into the toaster. Flick on the kettle. He’ll put forty euro into the antique teapot at the top of the good cupboard, where notes are crushed and scrunched in. There'll be four hundred in it already and he’ll never tell his mother that he’s added to it. She’ll think she’s somehow miscounted. She’ll not mind her mistake one bit. He'll burn the toast. He’ll scrape the black from it with a knife. Slap on enough butter to soften the crispness. He’ll realise he’s not hungry but know he can’t waste it now. He’ll eat it on his way down the hallway to his bedroom where his wee brother will be asleep in one of the beds. He'll put a fiver at the bottom of his brother’s wardrobe, letting it fall amongst his socks and shoes. He will, when he thinks of it, put three separate tenners in the pockets of three separate coats in the hall, all of which belong to his Mum. Some of them he’ll put deep down, beneath the layers of school blazers, aprons and his-vis jackets, content that they’ll be found, found eventually.

Andrew Maguire is a writer from Omagh, County Tyrone. He has an MA in Creative Writing from the Seamus Heaney Centre, Queen's University Belfast, and is employed as a Creative Writing and Publications Officer at South West College. His writing has featured in Blackbird, The Honest Ulsterman, STORGY, Lunate and The Irish Times. He is chairperson of the Omagh Literary Festival and co-founder of the Benedict Kiely Short Story Competition.

Tactics will be read on air by Ignacy Rybarczyk. 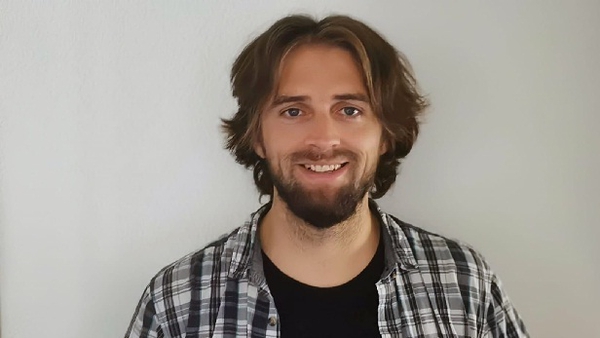