A couple of months into lockdown, The Ray D'Arcy Show invited RTÉ Radio 1 listeners to send in A Page From My Life - 500 words from anyone, anywhere on the island, and beyond. The response was overwhelming.

Ray and his team were inundated with over 2,500 entries, which were whittled down and sent off to the four judges - bestselling authors Eoin Colfer, Donal Ryan, Emilie Pine and Emer McLysaght.

The overall winner was Elaine Wilbur from Galway, who wrote about childhood friendship and a sense of belonging. The 39-year-old psychotherapist and mother of three boys read her story on air for Ray and his Radio 1 listeners.

Now a new book, A Page From My Life (published by Harper Collins Ireland), collects 150 of the super-short stories on themes of childhood and family, the remarkable everyday, love and loss, and, of course, humour. All proceeds go to The LauraLynn Children's Hospice Foundation Foundation.

Read Elaine Wilbur's winning story below, followed by stories from the runners up, Susan Carry and Ann Battersby.

Page From My Life by Elaine Wilbur

We climbed to the top of the high wall around Kelly’s field. Come on, she says. Just stand up.

It’ll be faster. Kelly’s field has the biggest hay jump. We heard that you could jump from the railway bridge. She wants to go and I want to be her. I watch her nutty legs stretch in front of each other. Her socks inside her corked German sandals. That smile she flicks backwards is warm and taunting, the same smile she has when she loans me another ten pence for Chickatees or Rubble Bubble. I want to get up out of my nine years of milky ordinariness. To shrug off early bedtimes and my Enid Blyton collection. To be white sliced pan for a day; normal for everyone else except me. Be brave I say to myself but my body refuses. My raspberry ripple knees grip both sides of the concrete blocks so tightly I feel printed with gravelly ridges. Those indents are the branding of my weakness. I knew I would never stand next to her or walk along this imagined tightrope. I knew it in the same way I knew I hated the wet potatoes in my mother’s stew. I probably have to go back for dinner I say and drop my leg down into my shame searching for solid ground. I see her knowing smirk as she skims away from me. Her form briefly covers the sun and I lower myself into her shadow before coming back to earth.

I wipe the ingrained rubble from my knees and make my way home. I hear the faraway screams of the hay jump threaded through the cuckoo’s call. The tarmac folds under my footsteps and I look back at my temporary mark. As I round the corner I see my brothers playing kerb to kerb. I hear the plastic spoke beads of someone’s bike rattling closer; someone who gets Kellog’s Frosties more than once a year and doesn’t have to fight for the plastic treasure inside. My fingers thrum along the different wrought iron gates I pass, each gap in a wall brings me closer to our opening. I have the scooped out feeling that something is missing. I look behind me wondering if I was worth following for once but I know that her reach is always further than mine.

I will always drop with the anchor while she soars with the sail. She is Mary and I am Laura, the Elisabeth to her Jessica. She is racerback tan lines and I am sunburned freckles. She is Quinnsworth, I am Dunnes. She zooms along with her in-line skates while I paint a P on my wooden tennis racket with black shoe polish.

It’s Wednesday so that means steaklets and chips. I can smell it coming through the open front door as I round the pillars. I like Wednesday’s. I still do.

Page From My Life by Susan Carry

October 2006 and I'm in the clinic in Our Lady of Lourdes Hospital in Drogheda waiting for a colposcopy. It’s a big day for me. As a very celibate single mother my female bits haven’t been exposed in the presence of another human being for a long time. I looked at the other women waiting. Were they here for the same thing? Were they like me? Did their last smear test need further investigation? Did their sister die at 30 from cancer? And their mother? The door opens and the nurse calls me in. I’m tempted to ask her if she has a Dyson to break through the cobwebs that form my chastity belt, but she has a very professional and serious demeanour, so I don’t.

In the room, there’s diagnostic equipment, a bed with a monitor at its head and my consultant, Dr. Ravpan. He explains the procedure, tells me not to worry and I strip and lie on the bed. Nurse Serious Head helps put my legs into the dreaded stirrups and my dignity says goodbye and leaves. I lie there, staring at the ceiling, trying to imagine that I’m on a beach in the Seychelles. My imagination is not good enough, and, instead, I imagine that Dr. Ravpan is putting on a miner’s lamp to hack his way through to his destination. As the procedure starts, the monitor beside my head blips into life and there it is, my cervix in 32-inch technicolor. Of course, I’d googled what was going to happen and what an abnormal cervix should look like, so I stayed glued to the screen, second guessing everything I saw. And as I lay there and as the procedure continued, the atmosphere in the room changed. Was I imagining it? I looked at Nurse Serious Head, but she wouldn’t make eye contact and suddenly there was a tangible gravity and tension in the room. And silence. Finally, Dr. Ravpan said he was finished, and I could get dressed.

Fully clothed now and as I gathered my belongings, the doctor explained that he would see me for the results in two weeks time. My head was telling me not to ask, just leave, say nothing, but I couldn’t resist and said, "Did it look ok?" He looked me in the eyes and said, "It didn’t look normal" and those four words heralded the start of my fight with cervical cancer.

Page From My Life by Anne Battersby

After I stitched the cardigan together I held it up, would you look at the size of that its tiny, John put his hands over his eyes and said don't be showing me that I laughed and waved it at him, another one of his superstitions, he was full of them.

We had an early start the following morning, it would be my last trip in the Scania for a while, it was very bumpy and John didn’t think it was good for me to bouncing around in my condition. It was almost Christmas and we were expecting our first baby the following April and planning to marry soon after that, so it was exciting times for us.

I always looked forward to our trips down the country. We would stop off for breakfast, and have lunch on the way home, John had been a truck driver for years, so he knew all the good spots. I loved being high up on the road we’d listen to our music and sing along. We stopped just outside Waterford at a small little house that served food, the smell of bacon and cabbage greeted us as we walked in the door and the place was full of other truck drivers tucking into their dinner.

On the way home John was very quiet I put it down to him being tired but it wasn’t like him at all, I was going to my Mams so he dropped me at the top of the road and said he would give me a call in the morning. He kissed me on the check, and I hopped out, I stood and waved as he drove away.

The following day I didn’t hear from him, but it wasn’t that unusual and as we didn’t have mobile phones. I had a hospital appointment so the day went quick enough, and I had an early night, I knew I would hear from John tomorrow. I woke to hear my sister Una’s voice downstairs, she worked nearby and often called over on her break for a chat. I threw on my dressing gown, Una was sitting at the table chatting to my Mam. She worked with John’s sister who she said wasn’t in work, she was a great one for taking unofficial days off and always came up with great excuses, I laughed and said what excuse has she used this time, Una smiled," ah you are going to love this one, she said her brother is getting married"

We all broke our hearts laughing, I said she really is scraping the barrel now.

Later that evening the phone rang, Mam said "that’s probably John", I answered thinking it was him, but instead I heard my friend's voice. We chatted for a few minutes, "are you ok" she asked and I said " I’m fine", she said you haven’t heard the news then," what news" I asked. She paused, "John got married today".

A Page From My Life (published by Harper Collins Ireland) is in bookshops now. Listen back to The Ray D'Arcy Show here. 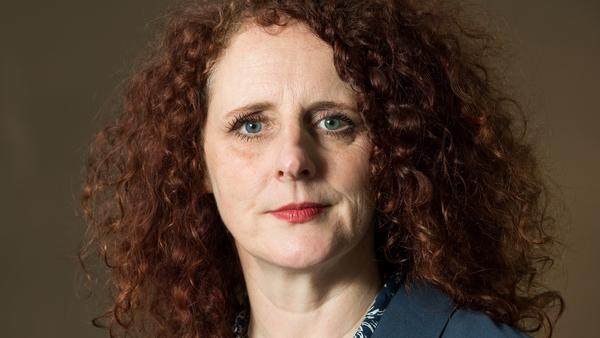 Maggie O'Farrell on her first book for children