Veteran actor and writer Patrick Dawson writes for Culture about the making of RTÉ's legendary 30-hour 1982 dramatisation of James Joyce's Ulysses, which airs in full on RTÉ Radio One Extra this Bloomsday, June 16th - you can download the production here.

The book was not simply read aloud by a single voice, but performed as a radio drama, with appropriate sound effects, soundscapes, narration, and having all of the characters ‘played’ by members of a company of professional Irish actors … the RTÉ Players augmented by freelance Dublin actors. The director was William Styles and the sound engineer Marcus Mc Donald.

Stephen Dedalus is James Joyce's alter ego. All the thinking, hopes, concerns, ambition, basic human drives, religious confusion and guilt which this young man is dealing with, form part of the multi-layered content of Ulysses.

Joyce’s Ulysses is said to be one of the frequently started, but often not finished, novels. However, the raising of the text from print to the spoken word proved to be a great success and is said to have assisted students and other readers worldwide to travel this literary marathon with enjoyment and fascination from start to finish.

The role I was invited to play was that of Stephen Dedalus, who was the leading character in Joyce’s previous novel, A Portrait of the Artist as a Young Man. Ulysses follows a day in the life of Stephen, beginning at 8.00am on 16th June 1904.

It was calculated that the finished recording would run to about 30 hours. A schedule of rehearsing and recording a segment over two or three days at the beginning of each week over a number of months was made. And so, we began. Each rehearsal/recording was preceded by a brief explanation of the text by Professor Roland McHugh. Then, on we went, first rehearsing a short section, making appropriate adjustments and improvements and then recording it. Because we were recording onto tape using Studer equipment, stopping and starting in the middle of a section was troublesome, so we tried to tape through each section without doing so. From my point of view, if I felt satisfied with a good performance on a particular ‘take’ I was not keen to do it again and maybe lose some of the ‘magic’ that might have been in the first one.

Stephen Dedalus is James Joyce’s alter ego. All the thinking, hopes, concerns, ambition, basic human drives, religious confusion and guilt which this young man is dealing with, form part of the multi-layered content of Ulysses. By means of his interchange with various other characters and an amount of ‘stream of consciousness’ type thinking, both Stephen’s exterior social persona and his deep interior self are revealed to the reader and listener.

As an actor, it was my function to serve the text, respecting both it and the listeners. The function of a drama is to ‘attract, retain and enhance’ the audience member. The actor has not written the text but does have the opportunity to ‘sieve’ it through his or her personal experience hoping to bring empathic, humane understanding to the portrayal. Ideally, the audience member will then relate to the character at an almost telepathic level.

The actor also has to come to his or her own personal decision as to how the character is to be acted. Academia may have a multitude of learned opinions and theories regarding the ‘whys and wherefores’ of the character’s life, but the actor cannot, and probably should not, take the time to engage with all of them. There comes a day when he/she must perform the character as a living, breathing, fallible human being. On that day, speculation ends and the actor, with complete confidence, whether justified or not, takes to the microphone and performs. An Abbey Theatre play director famously advised his class of acting students, ‘‘When performing, ‘Right or wrong, I am right!’’

Ulysses required a large cast of actors. All members of the then RTÉ Repertory Company, plus a number of freelance actors, played the many roles. The book is peopled by what seems like a myriad of characters, saints, sinners and all in between. It is these portrayals which raise the printed word right off the page.

Proteus, the third chapter of Ulysses, was entered in the Prix Futura European Awards and received high commendation. In Proteus, Stephen is walking into town across Sandymount Strand with some letters he has been asked by the Principal of the school in which he teaches, to deliver. It is 11.00 am. As he walks, Stephen encounters sights on the strand such as a rusted boot, a dead dog, a live dog, two women carrying a bag in which Stephen speculates there may be a foetus wrapped in red wool. In what could be described as a walking meditation, he considers the ‘modality’ of the ‘visible’ and of the ‘audible’ at the beginning of a magnificent mental journey of dramatic, self-examination.

It is an amazing, human, challenging, intriguing piece of writing dealing as it does, with a young man’s sexual fantasies and guilt, his inner battle with religious belief, the mocking of his own earlier hubris regarding his personal ambition, memories of his mother’s death, all set against the background of simple, everyday events on Sandymount Strand.

Ulysses will broadcast from 8 am on the 16th of June on RTÉ Radio 1 Extra - listen to it now and keep up with all things Joyce and Bloomsday-related here. 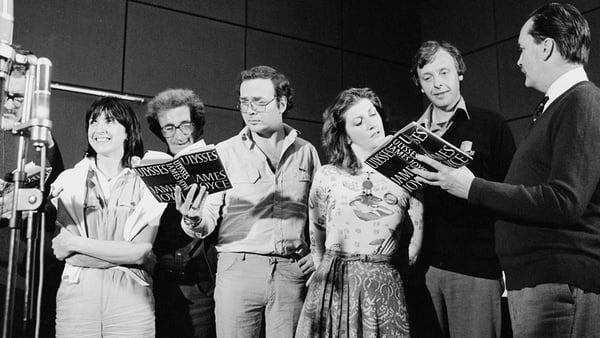