To coincide with the RTÉ broadcast on television and radio of a concert of the songs of Leonard Cohen performed by the RTÉ Concert Orchestra alongside a host of guest artists, writers also contribute to the celebration. Here from a series of short articles specially written for RTÉ Arts and Culture is Christine Dwyer Hickey, author of Tatty, the 2020 Dublin One City One Book.

I was twelve years old and young for my age as they say, when I fell in love with Leonard Cohen.

At the time, I was spending the weekend on the more salubrious side of town with a friend of my parents: a woman and her two daughters. One of the girls was few years ahead of me, the other, a year or so behind. I loved staying with these people. Everything about them was different. For a start they lived in a large upstairs flat overlooking a leafy square. There were posters on the walls and the floorboards were bare. They drank coffee instead of tea, and they never ate stew but rather goulash or curry and - my absolute favourite – something called chilli con carne. The mother never gave out and as if that wasn’t unusual enough, she went to work every day in an office. As the parents were separated, the father lived elsewhere, and this seemed to greatly contribute to the relaxed atmosphere.

One particular weekend, the weekend I took up with Leonard Cohen, the younger girl and her mother were away for the night. The older girl was to look after me and indeed, there was my dinner on the table covered in foil, just waiting to be heated in the oven. But the older girl and her pal, both bare-footed, maxi-skirted and wafting of patchouli and French cigarettes, clearly had other things on their minds. They asked me if I could keep a secret. Naturally, I lied and said that I could. The secret was that they were taking me to a party. But first they would have to make me look older. Twenty minutes later I was party-ready, wearing a kaftan that was about three sizes too big for me, my eyelids blobbed in bright blue eyeshadow and eyelashes so thick with lumpy mascara that it felt as if I was viewing the world through a mesh-wire fence.

It was a very dull party, I’d have to say: a few young men – the sort my father referred to as ‘Hairy Mollies’ sitting around a kitchen table talking in slow, serious voices, while girlfriends hovered in the background saying hardly anything at all. Not even a biscuit or bit of cake to be seen. I thought of my lonely dinner waiting back in the flat.

One of the Hairy Mollies produced a pouch of tobacco; his friend began licking cigarette papers – an act that caused some alarm to my two minders who quickly ordered me into the sitting room and warned me to stay put until I was called.

The characters were vivid, as if I'd found them in a book: Suzanne on her boat; Jane with her troubled eyes. A man in a torn raincoat...

But the sitting-room was in darkness! The curtains were drawn against the summer evening and I couldn’t see a thing. As my eyes began to adjust, I spotted a piano stool in the corner and perched myself there. I could now make out, six or seven couples seated on the floor. Snogging couples. The only sound louder than my rumbling stomach was the smack and gurning of mouths all around. I sat rigid with embarrassment, holding my kaftan tight to my chest and wishing I could die.

And then, a girl stood up, crossed the room and put on a record. A guitar strummed a few times and then, words began to edge into the room. Words that turned into pictures as soon as they hit the air. Pictures that turned into a story.

At first it sounded a bit like a fairy tale. There was a window and a girl called Marianne looking down from it, at a gypsy boy who wanted to read her palm. There was a green lilac park and something about angels and a man washing his eyelids in the rain. It was an incomplete story but all the more beautiful for that. The songs kept coming: some fast, some slow, but each of its own little world. Sometimes exotic, other times quite ordinary, the images spinning and dissolving around my head. The characters were vivid, as if I’d found them in a book: Suzanne on her boat; Jane with her troubled eyes. A man in a torn raincoat. Jesus and Cain. Birds and beasts. And the Sisters of Mercy – (not sounding at all like themselves). It was all very real and yet just out of reach – as so many grown-up concerns seemed to be then.

The music rolled along, steady and calm, powerful as a train. It brought a sense that I was travelling somewhere. And as for that voice! It was young and it was old. Light and dark. It was a voice that got into bones.

By now, a weird smell of smoke was coming from the kitchen - a right musky herb-scented pong. And all around me the sound of the snoggers continued to slurp and slop. But I didn’t care about any of that now. I was too busy listening to my future and all that it promised: the places I would travel to, the people I would meet, the experiences of love and intrigue that awaited. And the heartbreak of course, above all that - I just couldn’t wait to have my heart broken.

Christine Dwyer Hickey’s novel Tatty is the 2020 Dublin One City One Book - find out more here. Watch The Songs of Leonard Cohen with the RTÉ Concert Orchestra on RTÉ One on April 25th at 10.30 pm. 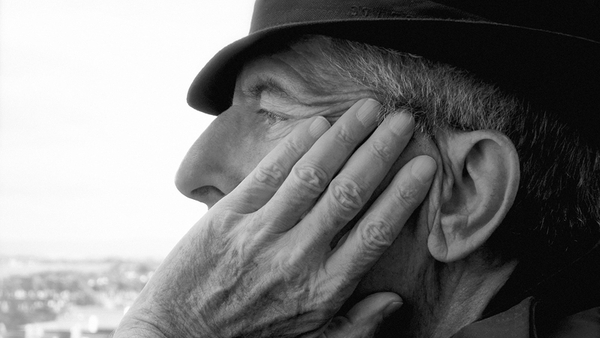 Songs from a Room: John Connell on Leonard Cohen