The Nobody Zone is a six-part podcast crafted by RTÉ's Documentary On One, in association with Third Ear Productions.

For newcomers, The Nobody Zone is a true-crime podcast with a dash of history, which transforms itself into the most intriguing cold case since the Black Dahlia.

It documents the life of Kieran Patrick Kelly, a hot-headed, alcoholic drifter who moonlighted as Ireland's, and perhaps Britain's, most prolific serial killer.

To date, it has over 1.5 million streams, which considering the thousands of serial killer based podcasts hitting the airwaves, is no small feat.

The podcast's success is unsurprising considering the content - underground slayings, tabloid lies, decomposed skeletons and confession tapes - The Nobody Zone is every true crime fanatics dream.

The story concluded on 24 March, leaving many listeners pining for their weekly dose of Nosy Kelly. To feed public demand, we interrogated the creators of the podcast to unlock more secrets from The Nobody Zone.

Zealous listeners will be well acquainted with the name Rob Mulhern. Rob is a London-based journalist and super-sleuth who guided us through Kelly's murky past. Our second Nobody Zone guide might be a stranger to listeners, but he is a Kelly connoisseur, series producer for Documentary On One, Liam O'Brien.

What drew you to this story?

Liam: What drew me in on day one was hearing about Kelly's story from Geoff Platt, and thinking is that how it went down? Is that actually true? I found it difficult to believe, so I decided we needed to see where the truth might lie. The further we dug, the more interesting the story became. And it turned into a story that just kept on giving.

As an investigative journalist, how do you tackle a story which has been dormant for over forty years?

Rob: On a story of this scale, with so little to work with, you're trying to create as many angles as you can. So, I cast the net wide and kept hammering the phone. You need to try and get people in the right places on your side too. I think it’s just politeness and persistence. I'd keep a daily log of everyone I speak to, or fail to speak to, on top of notes. On top of that, I've always been happy to ask for help and happy to receive it. Some of it's a long game - it took five years of conversations with a source in the British Transport Police before they finally handed over the Kelly interview tape.

Do you know what happened to the lost confession tapes?

Liam: They never made it into the police archives. And from what we can gather, the tape we got access to was the main tape with all the confessions on it. The other tapes contained much less information or testimony - kind of like warm-up acts ahead of the headline interview tape we finally got our hands on.

What is the most bizarre thing you learned making the podcast?

Rob: I guess it's how I found the builder who once employed Kieran Kelly. I'd actually known Brian for 10 years, but the Kelly connection never came up as we never talked about work. Over a period of years, I'd called up everyone I knew in London who was here through the period Kelly was convicted of murder, but no-one had ever heard of him. That left the cops with ownership of his story and that always bothered me. After Brian carried out a job on my house, my wife and I brought him to dinner. During the meal he started to talk about a 'double killer' he'd once worked with. Our jaws were on the floor - it was Kelly! They'd worked together for four years in the late 1970s. Irish London can be a small place. I guess the other thing is Kelly's alter ego, that he was also a man capable of being both charismatic and popular.

How do you tell a story like this without glorifying the killer?

Liam: It may sound contrite, but you just tell the story – don't fluff it up, don't take sides. That's the essence of documenting something; you examine the 'evidence', lay it out, try to make sense of it and ultimately allow room for listeners to make their own decision. It's important not to take a gratuitous route whilst also being mindful of the legacy of damage left from someone's actions, like Kelly in this case.

Rob: I have spoken to Kelly's grandson who confirmed that his mother (Kieran Kelly's daughter) was still alive, but that his grandfather's crimes had made life difficult for her. She didn't want to speak about her father, and I totally respect that. Her brother (Kelly's son) was killed in a bar fight in Clapham some years ago. They've had a tough time.

The story took over five years to construct - do you have a lot of unused material?

Liam: In total, we had about 60 hours of interviews and recordings, plus thousands of pages of notes, information and archive documents. But they're not unused as every single piece of information you find on a story, even if it's never used or heard within a production, it always informs the story in some way.

Was the title The Nobody Zone intended to be a social critique on society's treatment of the homeless?

Liam: In short, yes. It was Tim and Krister in Third Ear (our collaborators/co-producers on this project) who came up with the title 'The Nobody Zone' from Christy Moore's song, Missing You by Jimmy McCarthy. Absolutely the essence of the story lay in those on the fringes of society, and how society treated them. And in that societal vacuum, Kelly was able to do what he did in a world where few cared.

What is the most common misconception about Kelly?

Liam: Kelly was a complex character. At one point in his life, he was an "ordinary" Irish child growing up in rural Ireland, and then Dublin city, a "normal", average Irish family trying to make their way in life. He subsequently became a father, a husband and later a bit of a ladies man. All of that jars with the image of Kelly as a homeless alcoholic man who lived on the fringes of society, murdered repeatedly and wreaked havoc on those around him.

Why should people listen to The Nobody Zone over the thousands of other true crime podcasts?

Rob: Of course I'm biased, but this story is full of the kind of plot twists, tension and characters, that for me, would match any fictionalised Hollywood movie script. It's untold. It's real. And the interview tapes that backbone the series between Kelly and the police are pretty remarkable. From an Irish media point of view, it's unprecedented in terms of the public being given access to the raw testimony of an Irish serial killer.

Do you have any predictions about what will happen next with the case?

Liam: As it stands, the Kelly file is stagnant, not closed off, but the police have nothing new to add. However, we've four or five promising leads, some of which came in from listeners as the podcast unfolded, so we'd be hopeful we can get some of those to land in the next few months, and if so, we'll be back with a seventh, and final episode, but only if we have substantive new information to bring to light.

All six episodes of The Nobody Zone can be found on acast or any major streaming platform. 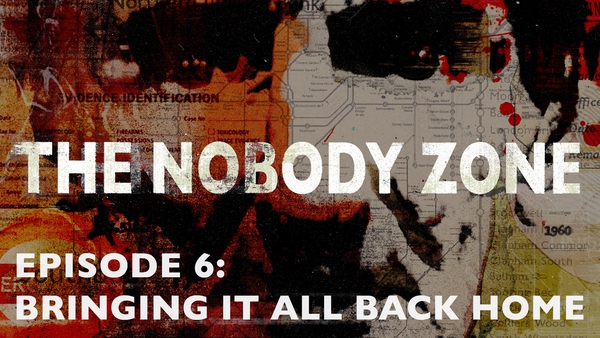 The Nobody Zone - everything we learned from the final episode Podcasts