We're delighted to present an exclusive extract from the 2019 Irish Book Award nominee Ireland Through Birds - Journey In Search Of A Wild Nation by Conor O'Brien.

In Ireland Through Birds, Conor O'Brien takes the reader on an ornithological adventure around Ireland in search of twelve of our rarest and most elusive birds. Along the journey the author explores every kind of landscape and habitat our island has to offer across all four seasons, from the remote isles of Donegal to the rugged mountains of Kerry and urban parks of Dublin...

In Search of the Corncrake on Tory Island

This is the farthest north in Ireland I've ever come to find a bird. In fact, it’s almost as far north as Ireland goes. Below me, the boat rocks in rhythm with the waves, the sea a murky black. The sky above is a textured, furrowed grey. And where they meet sits Tory Island, nine miles off the coast of Donegal.

As the boat swings in a loop around Inishbofin, Tory (as it’s called locally) slowly materialises out of the North Atlantic. The lighthouse, rising proud out of the sea, is the first giveaway. The west side of the island appears flat and gentle, the east side bulbous and steep (save a u-shaped cleft in the middle). Three ridges of rock bisect the centre, like the crests of waves.

There’s one bird for which Tory is especially renowned. It’s become somewhat of a holy grail among Irish birders, given the dramatic (and tragic) decline it’s undergone over the last century. From being an integral part of the fabric of the Irish summer, it’s been largely reduced to a few rocky outposts on the north and west coasts. The corncrake.

Given that the usual songsters of summer are altogether absent from Tory, I was expecting a vacuum of avian silence upon disembarking in West Town. How wrong I was. Tracing my way along the streets, around the small, white-washed chapel, a cacophony of bird noise fills the air. The irritated babble of tree sparrows follows me as I circle the church. They’re another species that has found special sanctuary on Tory, where their bulkier cousin the house sparrow has yet to gain a foothold. Further out in the fields there’s the zeet of lapwings, rising from the grass to steer herring gulls away from their nests. Starling chicks crown wooden fence posts, begging for grubs from devoted parents. And a wheatear flicks from perch to perch, his beak whiskered with the legs and wings of crane flies, doing a circuit of his territory before returning to the nest. Then, amidst it all, I hear it; the cry I’ve come so far to hear. The closest thing I can compare it to is someone crudely raking a stick against a güiro, twice in quick succession, the second note a slightly higher pitch than the first. It’s far from the most attractive sound in the bird world. There’s almost an automation in the rhythm of it, more like a mechanical malfunction than the rich repertoire of vocal flourishes you might expect from farmland birds. But it’s nothing if not potent. It travels far in its brutal, hoarse simplicity, the aftertaste like a football being pounded against a brick wall.

Long bouts of calling are interrupted by lengthy pauses, frustrating my urge to zero in on a corncrake garden or field. The audio-space is filled once more by the sounds of the more familiar birds. I start to discern a corncrake’s croak in the tsshing of young starlings and even the distant honks of gulls. At times I have to physically stop, motionless, so as to pick out a corncrake when it resumes calling among the chatter, a meditation to re-centre my search.

Eventually I track one to a field at the back of some houses. Another male has staked his claim to the field next to his. I notice that when one starts calling, the other soon resumes his song as well, fearing that a rival left unchallenged will garner all the affections of the females that sojourn in silence through the daffodils and nettles.

Male corncrakes can sing like this for much of the day because they’re unencumbered by the fatherly duties of many other birds. Parenting is usually the province of the female corncrake; she alone incubates the eggs and feeds the chicks. The male’s role is to locate a prime spot in the undergrowth from which to call incessantly, drawing all the females within earshot to him to mate. The strength and vigour of his call is the sole measure of his worth. As I listen, I wonder what endears the females to such a blunt, unattractive sound. Clearly the health of a male corncrake, his suitability as a progenitor, is writ large in his croak, the vessel of a rich aural tapestry beyond the scope of human hearing.

For all their vocal prowess, corncrakes are notoriously shy. The males prefer to call from deep cover, buried in the undergrowth. It is this that comes between me and my first corncrake sighting on my first day on Tory. With a weary head I retreat to bed, hoping tomorrow will bring better fortune.

Although not blessed with the same profusion of ruins as some of Ireland’s better-known islands, there are still glimpses of Tory’s past to be found, in a round tower collapsed on one side and sites like the West Town’s Church of the Seven. This tiny chapel, the size of a double bed, has been worn almost down to its foundations over the years, although its emaciated western wall still stands in a triangle.

Behind it, the Grave of the Seven is marked by a rusted Celtic cross. It’s named after the seven people (six men and a woman) who were supposedly buried here in a time long passed, drowned at sea, once a common death for residents of Ireland’s Atlantic islands. The clay on the grave still looks chocolate brown and fresh. According to legend, it’s much prized for its ability to keep seafaring vessels free of rats. These properties also apply to the island as a whole; Tory is devoid of rodents, another reason why it’s such an ideal sanctuary for ground-nesting birds, among them the corncrake.

As if through gratitude to the deeds of the seven, a corncrake starts calling in the thick undergrowth that spreads out around the church. I crouch down and peer out over the remains of the walls like a sentry risking a lookout over the trench. I scan every nettle leaf and thistle spine for a glimpse of the corncrake it might conceal. But the frustration of yesterday resumes. The breeze swirling in from the Atlantic sends shivers through the nettles. Through my binoculars, I hope in vain that every twitch in the plants will betray a corncrake moving through them. But no bird comes stumbling out.

Instead the pattern is the same. The corncrake calls on and off, relentlessly trying to outdo the males in the field across the road. Each bout of croaking seems to come from a different spot in the field. Perhaps the bird is moving from base to base to lay claim to the whole field. Perhaps he’s trying to widen his catchment area of females by enveloping as much space as possible, or simply trying to find the best spot from which to project his call across the island. It amazes me how he can move about so seamlessly through the nettles, thistles and daffodil fronds without detection, much less be croaking within two metres of me and still go unseen. Were it not for the call, you’d be none the wiser that one of Ireland’s rarest birds was right in front of you, probably staring you in the face.

I turn to the field across the road to see how his rivals are performing. There are two males calling here, begrudgingly sharing a larger space between them. One is right in front of me, crek crek-ing from deep within a ball of nettles. Whenever he starts, his rival is not long taking up the challenge. At times, their calls fall comically out of sync with each other, a shambolic duet deaf to tone and timing, only to fall back into rhythm and blend together with a redoubled potency.

Then, at last, I see it. Towards the northwest corner of the field, where the nettles and daffodils start to thin out and give way to grass and licks of silverweed, the face of a corncrake melts out of my binoculars. He’s braving the open to call out in the morning sun, as if defying his rival to abandon the safety of the nettles.

Bathed in light and set adrift amid the green sheen of the grass, at last I get a chance to study his form. Corncrakes are distant cousins of coots and moorhens; subtract the facial shield and lobed feet and adjust the colours and the resemblance is clear. They’re about the length of a blackbird, though far bulkier; he appears almost jackdaw sized, with a long neck widening into a pot belly. Orange and grey converge along his head and neck, beginning to bar beneath the wings. His bold, spotted back is almost completely hidden. He tosses his head skyward with each croak, revealing the pink mouth as his dark eyes flash grey.

He can’t be more than ten metres away from me. Yet he takes no notice and makes no dash for cover. For a bird that clung so tenaciously to cover before, he shows no fear out in the open. He remains steadfast at the same spot, the silverweed and grass fanning out around him. He turns ever so slightly with each bout of calling, maybe to project his voice in another direction and entice mates from a different corner of the field. A single male may have several females breeding within his territory, laying, incubating and tending to her brood, all in silence,inconspicuous, while the male draws as much attention to himself as possible. It’s quite a thought to imagine a whole coterie of corncrakes of all ages, from hatchlings to hardened veterans of winter sojourns to Africa, all hidden from sight amongst the nettles.

Without a father to help them, and only having a short summer window in which to mature, corncrake chicks are precocious. It only takes them five weeks to fledge, at which point they’re ready to cross continents as the weather turns. While many of their counterparts remain nest-bound for weeks, the black, downy young of the corncrake are following their mother around the fields of Tory within days, and can become fully independent of her within just two weeks. In this timeframe, she’ll stock them up with the protein needed to fire their rapid growth, picking off insects, arachnids, slugs and even the defenceless chicks of other birds unfortunate enough to cross her path.

I’m overcome with relief at seeing the male. Over the last day on the island, I’d become resigned to the frustration that awaited me, hearing corncrakes right in front of me but never seeing one. I had waited by the Church of the Seven for well over an hour for one of the three males calling within its orbit to show his face. And now that one has, the sighting, as is so often the case with a bird you’ve waited so long to see, is brief. A quick glance at my phone, a foolish concession to modern life, and he’s gone. Head down, silent, slinking away into the nettles. 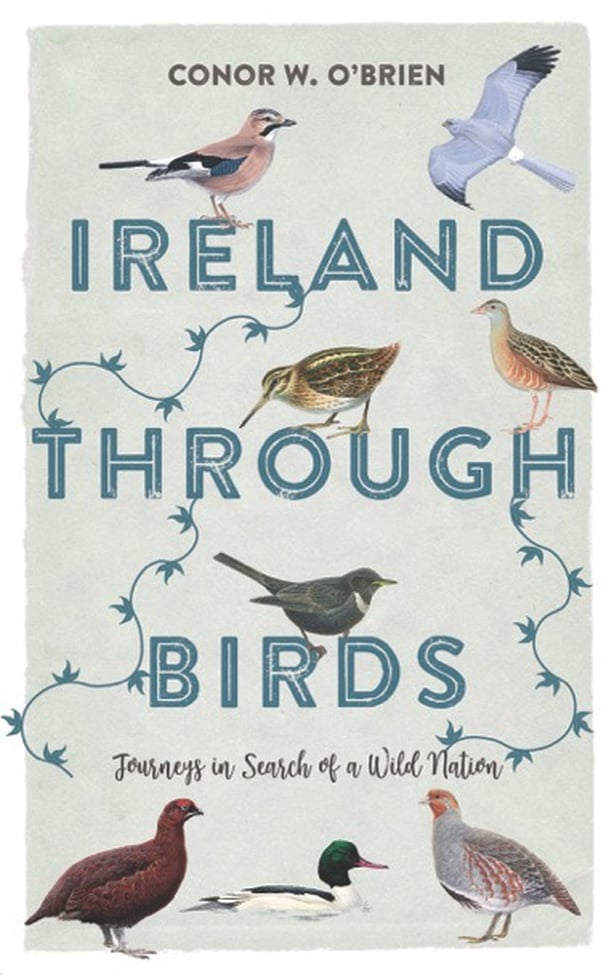 Ireland Through Birds - Journey In Search Of A Wild Nation by Conor O'Brien (published by Merrion Press) is out now. 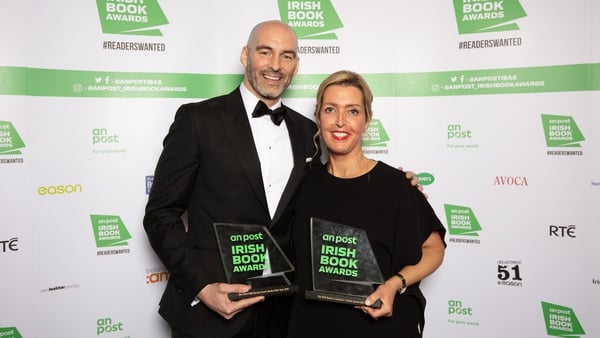