Of the many things Bradley Grace misses about his dad Brendan, the hand-written cards come close to top of the list. Particularly if there was a melted Crunchie bar or a lottery ticket stashed in the envelope. That was one of his dad's signature moves, as Bradley told Ray D’Arcy - listen to their interview here.

The man who brought us the characters Bottler Murphy and Father Fintan Stack as well as 50 years of music, comedy and theatre is the subject of a three-part television series on RTÉ One – Brendan Grace: Thanks For The Memories.

Ray asked Bradley how he was feeling as the documentary, charting the final months of his father’s life, landed on Irish screens, Bradley told him that the public support since the death of his father in July, has made a huge difference to the family.

"We’re devastated and it’s been very difficult, but there’s been a huge outpouring of support and well wishes from people all over the country and that’s a huge help. Just to see what kind of effect Dad had on people’s lives. It’s comforting."

In the months before his death, Brendan Grace was planning a variety show at the Olympia Theatre in conjunction with The Forget-Me-Nots Choir. Brendan was a huge supporter of the group, who are an inclusive community choir for those affected by dementia, their families and friends. He even recording a fundraising single with them last year.

"He accomplished his goal in life which was to make people happy."

Bradley told Ray that his Dad was very hands-on during the planning of the variety concert and making of the documentary, until he became ill half-way through. With Brendan’s encouragement, the filmmakers continued to follow his every moment as he worked to put on one final show.

Brendan Grace Thanks For The Memories. The first episode of the three part series begins tonight at 9.35pm.#BrendanGrace pic.twitter.com/BsWWuNw0ec

Brendan was totally committed to the cause of raising awareness of dementia, so much so that his family promised to make the event happen after he was gone. The variety show took place on the 24th of September and featured a host of Brendan’s friends from the entertainment industry, including Foster & Allen, Sharon Shannon, Paddy Cole and Dickie Rock. Surely Bradley’s dad was there too – in spirit.

"He was more than there in spirit. There were sound bites and videos being played, I spent most of the time standing in the wings and I couldn’t really see anything, but throughout the night I kept hearing his voice … knowing he wasn’t there was heartbreaking. But it was a beautiful tribute."

Brendan Grace Thanks For The Memories continues Monday at 9.35pm.#BrendanGrace pic.twitter.com/mFdKRHJncP

The new documentary series has archive footage, interviews and performances with the man Frank Sinatra once referred to as his "man in Europe" as well as deeply personal moments with family and friends. One thing’s for sure, as Bradley says, his dad achieved what he set out to do.

"He accomplished his goal in life which was to make people happy."

Brendan Grace: Thanks for the Memories airs on RTÉ One television on Monday 30 September, 7 and 14 October at 9.35pm - watch it here on RTÉ Player, and listen back to more from The Ray D'Arcy Show here. 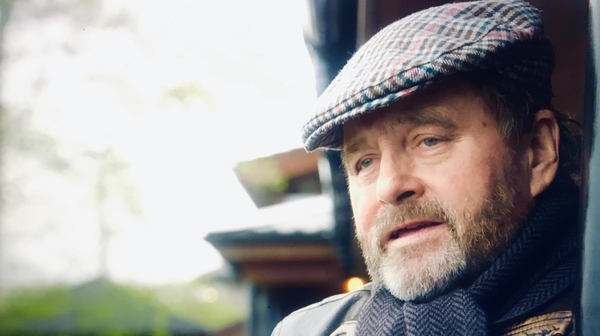