Thousands of Irish people live with HIV today. Many of them are still living in the shadows, fearful of judgement. The numbers of people being diagnosed with HIV are higher than they have ever been.

In this week's Documentary On One, The Undetectables, documentary maker Mary Elaine Tynan meets four people affected by HIV and find out what it is really like to be HIV positive in Ireland today

Listen to Documentary On One: The Undetectables below:

It started, as many things seem to these days, with a Facebook post. It was March 2016 and I scrolling through my newsfeed one. I remember where I was. I'd like to say I was sitting on the couch but actually I was in the bathroom. Hiding. From my family. My husband and I take turns to do it sometimes. Just five minutes of zoning out looking at Twitter or Facebook.

So there I was, scrolling away absentmindedly, probably wondering what to cook for dinner, when I came across a viral post that friend Anna had shared. And immediately it caught my attention because the man in it was very familiar to me. It took me a moment to place him. We weren’t "friends" or anything so I wasn’t used to seeing him in this context. And then it clicked. It was Michael, the very trendy, chirpy guy who runs one of my favourite cafés. Makes a mean blue cheese and guubeen sandwich but that’s another story. I wondered why Anna was sharing a post from him so I read on:

This is the picture I’ve just uploaded to my Grindr account… I’m Poz. Healthy & Undetectable…If that’s an issue it’s your issue not mine

I was really surprised. I never knew that Michael was HIV Positive. He looks very healthy. Having lived in Africa though I’m never shocked by HIV. I met people living with the virus and many who had lost family members to AIDS. I also remember enough about my education in the eighties and nineties to know that it’s not transmitted through cups or knives or hugs or even kissing (not that I have ever kissed Michael, to be fair. He’s gay for starters and I’m married… but I digress!).

The fact that Michael was "Poz" didn't concern me in the least. What did really bother me was what he wrote. About the stigma associated with HIV he has had to endure. Especially in the gay community. Which really surprised me as I would have thought the gay community would be very supportive since so many gay men died of AIDS in the 80s and 90s. And yet I was also really heartened and moved by Michael’s honesty and bravery. I wanted to know more. Why is there such stigma associated with HIV in 2016? Why did he decide to tell his story now?

Something else occurred to me. As a journalist, I had heard that the numbers of people contracting HIV was increasing every year. To numbers higher than during the AIDS pandemic. So why wasn’t anybody talking about this? Why wasn’t there a conversation taking place in the media? Aren’t young people being educated about it? Do they even know that it still exists?

When I read Michael’s post I immediately decided that I would like to talk to him to see if he would let me tell his story and by doing so perhaps answer some of the questions I had.

When I approached Michael in the café he was really happy to talk about his Facebook post. He told me it had gone viral all over the world and that he had been contacted by people in many different countries thanking him and talking about their experiences. We talked for more than an hour that day and at the end, I asked him if he would be willing to let me interview him. He was. I now had the beginnings of a radio documentary on my hands…

I had heard that the numbers of people contracting HIV was increasing every year. To numbers higher than during the AIDS pandemic. So why wasn't anybody talking about this?

That was three years ago. Normally it takes me up to a year to make a radio documentary. I work full-time in education so I do it in my spare time. Researching, interviewing, editing, etc. This particular documentary took almost three years to complete, for reasons that will become clear.

After a couple of conversations with Michael, I realised that I needed to educate myself about HIV. And not just HIV but all of the nuances associated with living with HIV. But also how it can become AIDS, the treatment that has meant that people with HIV don’t have to die of AIDS (antiretrovirals), the history of the virus in Ireland, the statistics in recent years and so many other aspects I wasn’t aware of. I met Niall Mulligan in HIV Ireland and he educated me about so many aspects of the virus and of the people they work with in HIV Ireland.

Niall told me about PEP (Post Exposure Prophylaxis - the equivalent of the morning after pill which can be taken by anyone who has been exposed to HIV in the last 72 hours) and about the controversial PrEP (Pre-exposure prophylaxis - the equivalent of the contraceptive pill to stop people from contracting the virus). I also quickly learned about U= U campaign around the world; undetectable equals untransmissible. This part fascinated me as I had not realised that for people who take their HIV medication, and get their viral load to the point where it is undetectable, it then becomes untransmissible. As in, they can’t pass it on.

It was then that I decided that I wanted to talk to other people living with HIV. People like Michael who looked happy and healthy. Who were taking their medication, and so had undetectable levels of the virus. I wanted to learn about their experiences of living with HIV in 2016.

Over the next year, I looked for men and women who were willing to speak about living with the virus. People who had contracted it through sexual activity, blood transfusions, IV drug use, Irish people, people who had moved to Ireland in recent years. And yet it wasn’t as easy as I thought. Men in the gay community were the most willing to talk. I haven’t been able to include them all in the documentary but I spoke to Michael, to Tonie, to Robbie Lawlor. I emailed Rory O’Neill, who was very helpful too.

The fact that Michael was "Poz" didn't concern me in the least. What did really bother me was what he wrote. About the stigma associated with HIV he has had to endure.

Once I had spoken to men I realised I needed to hear the voices of women living with the virus. But it seemed that when I started asking around, doors weren’t opening. Nothing. Women were… well, invisible. I just couldn’t track down any who would speak to me. And that is why it took so long to finish this documentary. Because I felt like I could not make a documentary about HIV without representing men and women living with the virus.

I finally managed to meet two women through a man called Gerry who runs an organisation called AIDS West and he introduced me to two women. We’ll call them Rhona and Josephine although those aren’t their real names. The only way they were willing to speak was on the condition of complete anonymity. Such is their fear of people finding out about their HIV status that they would not risk being open about it. If they were the only women who were willing to speak on the condition of anonymity, the stigma for women living with the Virus must be enormous is other women were not wiling to speak.

I spoke to the four people in this documentary several times over the three years. And finally, it is finished. I hope that this will give them a voice. That it will make people think again about their own attitudes to people living with HIV. Their knowledge about the virus. Make them reassess the assumptions they make, judgements. And hopefully, this documentary will educate people. Because that is what every person I met wants; that Irish people become educated about HIV. So that they don’t contract it, and if they do, that they realise it’s not a death sentence. And for those who do not, that they treat people living with HIV with dignity and respect that they deserve.

If you have a loved one, family member or friend please share this. Talk to them. Help them because we all need love and support. Enable them to overcome their fears. Show them love and kindness. Allow them to live a more honest and free life. Everyone deserves respect.

I couldn’t agree more. So if you learned something from this documentary (even if it made you uncomfortable at times) or if you think someone you know might enjoy it, please share it.

Documentary on One: The Undetectables, RTE Radio 1, 21st September 2019 at 2pm, and 22nd September at 7pm - listen back to more from Documentary On One here. 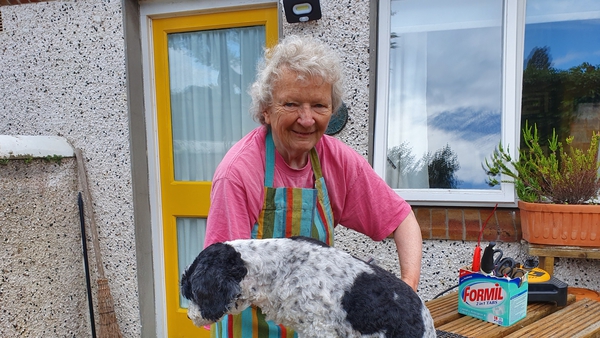