In the first of a series of artcles about making a career in the arts, SJ Williams writes for Culture about how the Bachelor Degree in Stage Management and Technical Theatre at Dublin's Lir Academy, and how The Lir is creating a new generation of theatrical talent behind the scenes.

I'm writing this from the crew room at the Assembly Rooms in Edinburgh, taking a much-needed break during our fourth out of nine shows today. I’ve been in Edinburgh since mid-July, working as a Venue Lighting Technician, building and rigging venues in anticipation for the largest Fringe festival in the world, working long hours every day, often late into the night, fueled by coffee. It sounds rough, but I’m having the time of my life!

Five days before I arrived here, I was still an SMTT student at The Lir Academy, celebrating my last day of a three-year course that is like no other, the course that prepared me for the job I do today.

I knew being back in college would be a big adjustment but nothing could have prepared me for the impact it would have on my life.

At 25, I applied as a mature student to The Lir. I had reached a point where I felt I had gone as far as I could go in my previous career, or at least as far as I wanted to go. I had always been interested in working in theatre, but I didn’t know where I would fit in it, or how to turn it into a career. The online application was very simple. I remember being afraid to hit submit in case I’d gotten it all wrong, but I did it. A month later, I was in Dublin and sat in front of the interview panel made up of five tutors and course directors. I thought I would be nervous or anxious but within minutes it was no longer just me and all of them, we were all just chatting as if we were already friends and colleagues.

I was accepted late in June, about three weeks after my interview. I felt excited and nervous, like maybe they picked the wrong woman. I couldn't wait to start, I knew being back in college would be a big adjustment but nothing could have prepared me for the impact it would have on my life.

The hours were long and very tough, I enjoyed the work but it pushed me to levels I hadn’t been before, an experience that serves me very well in my new career. In a small year group, it was refreshing to find that there was a good gender balance across the SMTT course in each year, in fact my year had more women than men, which is not often the case when working as a theatre technician so for me, this was an environment where I could hone my new skills in a familiar, comfortable and encouraging environment.

The friends I made at The Lir will be friends I’ve made for life, not just my classmates, but also staff and mentors who have supported me as a student and continue to support me as a professional. Some of my tutors have become my employers and colleagues, as have other students who graduated before me. It’s not unusual to be working on a show that is almost entirely staffed by Lir graduates and students, we are all part of a large and strongly connected professional network.

I had always been interested in working in theatre, but I didn't know where I would fit in it, or how to turn it into a career.

Finding work at first was intimidating when I was in college, I was afraid of over-committing myself, but eventually, once I had put myself out there, I got my first job at The Abbey Theatre when I was still in first year. After that, work steadily began to grow, throughput second and third year I continued working and making connections through opportunities that The Lir provided for me, I was invited by Robe Lighting to their factories in the Czech Republic, I travelled to RADA in London with the Lir Showcase, I interned at the prestigious Wexford Festival Opera.

When I leave Edinburgh I’ll head home to Dublin Fringe Festival as a Production Manager, then to Beijing, then to Belfast and on to a tour around Ireland. I'm is very happy to be working freelance in theatre and to be able to remain based in Ireland to do it. The Lir, and the experience I had there set me up with an arsenal of skills with which to build a very exciting career.

Find out more about the Bachelor In Stage Management And Technical Theatre at The Lir here. 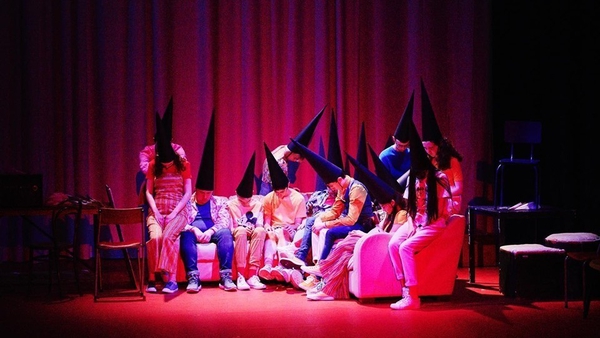