Jimmy Fay, Executive Producer at The Lyric Theatre, remembers actor, colleague and friend Karl Shiels, who sadly passed away earlier this week at the age of 47.

Listen there's people who make waves! They are naturally disruptive. But they make waves! And plenty of people can follow in their wake.

So upset to hear about Karl Shiels! To see the tributes to him on social media and elsewhere is at once heartbreaking and cheering. Karl never gave up. He always championed the new, the out there, the fresh. The Fringe. Theatre Upstairs, the new writing theatre co/space that he set up with Laura Honan, may well be his legacy but the effervescent nature of theatre demands his presence as an actor of extraordinary talent deserves praise ( I can’t believe I’m writing this about someone so young, so respected, so loved by those who loved him).

Rough Magic joins the entire sector in mourning the  terrible loss of Karl Shiels, the maverick spirit who set the agenda for the establishment to follow. For his entrepreneurial creativity & his exceptional gifts as an actor, we honour him. pic.twitter.com/JTfVNbKSEO

We went back to the first Dublin Fringe where he was directing a show in the back spaces of a derelict outdoors space & he spun it at me in the sweltering office of Bedrock in Ormond Multi-Media Centre during the boiling hot summer of '95. I liked him immediately and loved his grin. His dark funny grin. He LOVED theatre. You could tell immediately he found this way to express himself. He’d act, produce, write. He’d do it all.

Karl was always a game-changer. I think every generation of theatre makers think they are game-changers but the 90s put a hell of a lot in getting that wheel turning. We set up the fringe. We highlighted the importance and brilliance of independent theatre outside Arts Council or big theatre patronage. Karl was a big part of that. That can do, will do attitude. Making the production process more accessible especially for those who thought it was beyond them.

I first saw him act in The Firestarters at the City Art Centre (mid-90s) and his presence in a terrific mad production was gigantic! I asked him to be part of Electroshock, Bedrock’s Theatre Of Cruelty season which suited his adventurous, experimental, nature, and then he was in Bedrock’s Greek, perfectly & beautifully directed by Jason Byrne, with a fantastic ensemble. Karl was effortless, dangerous and dripping charismatic charm. I directed him in At Swim Two Birds, adapted by Alex Johnston in The Peacock - he leaped at the freewheeling, improvisational nature of our approach and was so insightful on so much we could do with it. He was a wonder to watch.

Mark O’Rowe brought him to the Bush for Mike Bradwell’s superb and epoch-making premiere production of Howie The Rookie. His performance as the wide-boy lothario Rookie sealed his legend. Then he won the Best Actor award at the Dublin Theatre Festival for Bickerstaffe's Comedians by Trevor Griffiths. Trevor thought he was the best, most dangerous actor to play Gethin Price since Jonathon Pryce. He said so. I loved the way Karl said these lines in it:

Some say the world will end in fire,

Some say in ice.

From what I’ve tasted of desire

I hold with those who favor fire.

But if it had to perish twice,

I think I know enough of hate

To say that for destruction ice

Karl could do the dark but when he wanted he could be so funny. He was funny and daft and dangerous in Henry IV, which we did in the Peacock. By now, Karl set up Semper Fi and their opening production as part of the Dublin Fringe that year, Ladies and Gents in St Stephen Green's public lavatories, was the most effective immersive theatre before ANU.

He directed a fantastic production of Top Dog, Underdog for Tall Tales theatre company in the Project.

So sorry to hear about Karl Shiels. Bumped into him a couple of weeks ago and commiserated about Theatre Upstairs' loss of premises. "Not a problem, it's only a building, the theatre is up here," he said, tapping his forehead.
Here he is in Oedipus Loves You rehearsals in 2007. pic.twitter.com/15jiYFBKLv

As the years passed, we weaved in and out of each other’s creative lives - not all of it memorably - but the next to last time I worked with him was in the Abbey’s production of The Resistible Rise Of Arturo Ui , where I cast him in the Gobbels part - a wheeler, a dealer, a master of propaganda. He had that grin and had no problem with the darkness.

The last time I saw him was at an opening in the Abbey earlier this year: "I love you, brother. Our work. I love you". He hugged me and I hugged him. I was surprised by the outburst - really surprised, as we hadn’t talked much in the previous eight years. I thought he didn’t look his svelte self but then we’re all getting older. I never for a moment thought I’d never see him again, even if it would be just across a crowded room, his grin making me, us both, laugh.

His generosity was always expansive; he gave me an amazing film noir book in 98, an AC/DC mix tape peppered with Nick Cave songs which I played till my car chewed it. Once he appeared one day in rehearsals with a Lambretta bomber jacket because I had lamented the day before not being cool enough to not have one.

My thoughts, prayers and condolences are with his wonderful twin girls, their mum Dearbhla, his partner Laura and his Dad Harry; all his family and dear friends.

In the theatre community, he was a huge presence in all our lives. You couldn’t miss him if you worked in theatre in Dublin.

I salute you tonight Karl from Greece with vivid memories especially of what I, personally, thought was your greatest performance outside the Rookie, as Eddy in Berkoff’s Greek. I’ll miss the crazy party in Lanigan’s tonight. The address from the stages of Dublin and Galway. I’ll do something for you in the Lyric in next few days - you played there in Shadow of a Gunman in 2004/05. I’ll miss you man. Take care. We all have demons. You were something. Onwards. 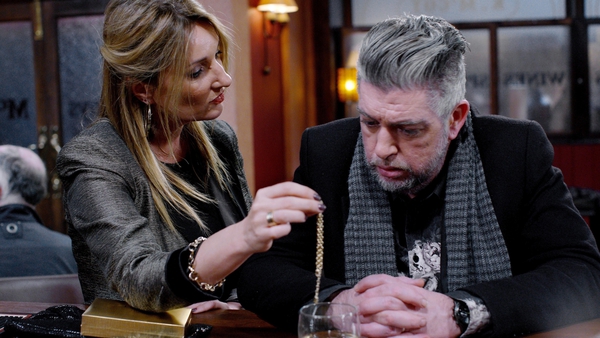