Dancer Áine Stapleton talks about her film Horrible Creature, a 'creative investigation' of the life of Lucia Joyce, which screens at the Irish Film Institute this January, as part of this year's First Fortnight festival, which challenges mental health stigma through creative arts.

I started dancing when I was 7 years old. My mam allowed me to attend modern and ballet classes, and it was my favourite thing to do. I was in full control of my body, and with that came a real sense of freedom and joy. Dance remains vital to my well-being, as it allows me to play out the unlimited potential of my body. I can often feel uneasy and restricted in my regular daily life, having to comply with socially prescribed normative behaviour and gender roles. My mother died when I was 15, and I don't remember crying or even talking about what was happening, I just choreographed whenever I could. I created dances that seemed abstract, but the movement somehow made sense to me for what I was trying to express. All those feelings that I had difficulty comprehending in my mind were being processed by my moving body.

Listening to and trusting my body is one of the most important lessons that I continue to learn from my dancing. I completed a Dance Degree at the University of Surrey in London in 2004. Since then my artistic work has expanded to examine issues relating to environmental protection, human rights, and trauma - in particular the after-effects of sexual violence and incest. I’ve been creatively investigating the biography of Lucia Joyce (daughter of the writer James Joyce) since 2014, through both choreography and film.

I have no interest in romanticising Lucia’s relationship with her father.

Lucia once commented to a family friend in Paris that she wanted to ‘do something’. She wanted to make a difference and to creatively have an impact on the world around her. Dancing was her way of having an impact. She trained hard for many years and worked with various avant-garde teachers including Raymond Duncan. She created her own costumes, choreographed for opera, entered high profile dance competitions in Paris, and even started her own dance physical training business after apprenticing with modern dance pioneer Margaret Morris.

Until this time she had lived almost entirely under the control of her family, and had to share a bedroom with her parents well into her teens. I imagine that dancing must have been a revolutionary feeling for her, and would have offered her an opportunity to process her chaotic and sometimes toxic upbringing. It was during these dancing years that she was finally allowed to spend some time away from her family, but this freedom did not last long. Her father's artistic needs and his sexist disregard for her career choice interrupted her training at a vital stage. She was forced to stop dancing, and the circumstances surrounding this time remain unclear. I do not believe that she herself made the decision to quit dancing. Lucia was incarcerated by her brother in 1934, and then remained in asylums for 47 years. She died in 1982 and is buried in Northampton England, close to her last psychiatric hospital.

I've read Lucia's writings repeatedly over the last four years, and my opinion of her hasn't changed. She was a kind, funny, intelligent, creative and loving person. After her father James’ death in 1941, she had one visit from her brother and no contact from her mother, yet she only writes good things about her family. She was consistently thankful to those people who made contact with her during her many years stuck in psychiatric care. She appreciated small offerings from friends, such as an additional few pounds to buy cigarettes, a radio to keep her company, a new pair of shoes or a winter coat, all of which seemed to offer her some comfort in her later years.

Lucia once commented to a family friend in Paris that she wanted to ‘do something’. She wanted to make a difference and to creatively have an impact on the world around her. Dancing was her way of having an impact.

Horrible Creature examines Lucia's story in her own words, and also focuses on the environment which shaped her during this time. The work attempts to tap into that invisible energy that can provide each of us with a real sense of aliveness and connectedness to the world around us, even in moments of great suffering.

Horrible Creature is the second in a proposed trilogy of films directed by Áine Stapleton and is filmed at locations in Switzerland where Lucia spent time. The first, Medicated Milk, challenged the accepted biography of Lucia's life and considered the complexity of mental instability. Here, Lucia’s own writing, interpreted by a cast of international dance artists, conjures her world between 1915 and 1950. The film fearlessly explores her difficult family life, her unproven illness, and her undoubted talent. Horrible Creature screens at the Irish Film Institute, Dublin on January 8th at part of this year's First Fortnight festival - find out more here. 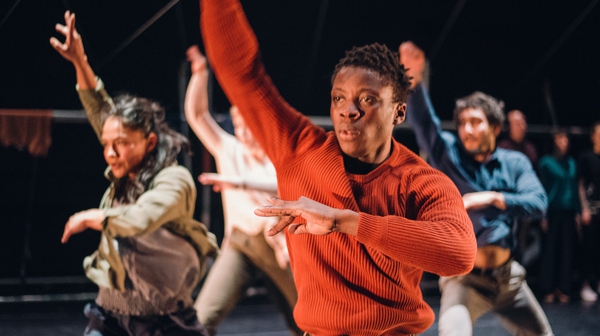 Why we need to celebrate our dance artists