Sean O’Rourke joked this morning that the studio was like "an all-Galway reunion" and there certainly was a lot of maroon and white on show during the programme. Druid Director Garry Hynes and Billy Keane, son of John B Keane, joined Sean in studio to talk about the latest production of the John B Keane play, Sive. Also joining Sean was Margaret Ward, who played "the very first Sive".

The play has been in production since 1959 and as Sean put it, it’s a "rare year that there isn’t some version of it on stage". This Druid production has just begun a run in the Gaiety Theatre. Billy described the basic plot – Sive is a young girl who is raised by her uncle following her father’s disappearance and her mother’s death. There are plans afoot to marry her off to a wealthy older man but Sive has a love interest of her own. Margaret Ward described her audition for that first Sive in 1959.

"It didn’t really mean anything to me because my big love in those days was my Irish dancing".

She told Sean she must have "passed the exam" because she got the part. She said John B Keane would stick his head in occasionally to see how the production was going and after a successful run in Listowel, the play went on tour.

"It went on the whole year long...We won the All-Ireland drama festival that year".

Calling all Sives! If you have played John B Keane's iconic role of Sive, please get in touch with our friends at @gaiety_theatre for our special national event, the Gathering of Sives: https://t.co/Ik7xfKMTxC #Sive #GatheringOfSives #IrishTheatre #JohnBKeane

"Obviously, the circumstances in which John B wrote the ‘tinker’ character, the travelling people of the road, was very different at the time. And now, 40 years later, life has moved on and attitudes have moved on and so on. And so, we wanted to look for a way where we could get what we thought he was bringing to the play but yet, at the same time, not have people go back to attitudes of 40 or 50 years [ago]. And so, casting them as women became an option."

What does Billy Keane make of this change to his father’s work? He told Sean he thinks he’s seen "at least 40 Sives, so he’s the right person to ask.

"The amazing thing was, I heard lines that I never heard before…This lady over here, Garry, we trust her. It’s just a question of trust. When she asked was it okay to change, we were unanimous as a family and we said immediately, go for it."

President Higgins meeting the cast of ‘Sive’ after last night’s performance at the @gaiety_theatre in Dublin. pic.twitter.com/cz0FGKJ6jZ

Sean attended the opening night last night. Former Taoiseach Enda Kenny was in the audience and is apparently quite the fan. Billy told Sean that Enda recited several passages for him verbatim.

"We had two Sives last night. We had Garry’s version and we had Enda’s version."

Tommy Tiernan plays Thomasheen Sean Rua, the matchmaker, in this latest production. Sean noted that Tommy had worked with Garry before and was curious what she made of him then.

"I don’t know if he actually spoke a line in the [previous] part. He was a murdered priest. He may have groaned."

It would appear Tommy has more to do in this role, as Garry described an attempt he made to pull off a trick featured in the play during technical rehearsal. It involves swallowing a letter.

"The whole thing stuck to the roof of his mouth. He couldn’t talk for about 10 minutes. Which was a great relief to all of us in the rehearsal room."

Listen back to the whole segment on Today with Sean O’Rourke here. 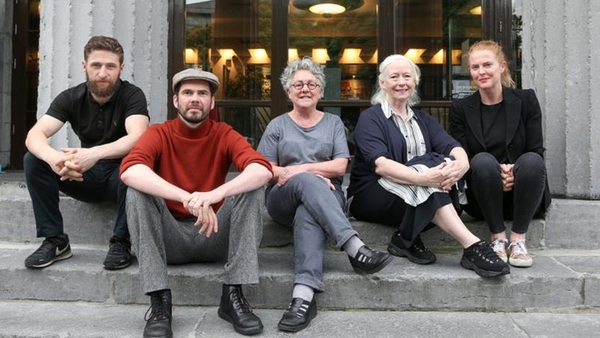