In the midst of the usual triumphs, tears and tantrums surrounding the Oscars kerfuffle on Tuesday, it seemed like the Irish animation studio's remarkable achievement of earning yet another nomination was somewhat overlooked.

If we can (and we should) celebrate the inimitable Saoirse Ronan with fanfare and roses, we should equally give credit where credit's due to the Kilkenny-based company and their fantastic work.

Perhaps it's simply now taken as a given that the Cartoon Saloon's output will be in contention with the finest animations the world has had to offer; after all, the only other features they have released to date – 2009's The Secret of Kells and 2014's Song of the Sea – both earned Best Animated Feature nods. True, both unfortunately lost out; the former to Pixar's Up (no shame there), and the latter to Big Hero 6, but a 100% record is nothing to be sniffed at.

This year, their latest film The Breadwinner will go head-to-head with DreamWorks' wry family comedy The Boss Baby, as well as Coco, Pixar's colourful musing on death and acceptance. Ferdinand (the 20th Century Fox Animation of the children's book about the pacifist bull) and the innovative Loving Vincent, recounting Van Gogh's life, the first fully-painted animated feature .

The Breadwinner, though, already stands out from the pack. Directed by Cartoon Saloon's Nora Twomey and executive-produced by Angelina Jolie, the socially-conscious film tells the story of Nurallah, a young girl in Taliban-controlled Afghanistan who is forced to disguise herself as a boy to become the titular breadwinner for her family when her father is wrongfully imprisoned. It's markedly different to the studio's previous work in terms of theme and tone, but looks no less beautiful or affecting. What's more, despite Jolie's involvement this is clearly no 'Hollywoodized' meditation on the impact of war; there are no marquee names or guest stars lending their vocal talents, which makes its growing success all the more impressive. It's already clocked up a Golden Globe nomination and a glut of other nods in the prestigious Annie awards, while the Los Angeles Critics' Association deemed it their favourite of 2017 earlier this month.

They've certainly come a long way. Co-founded as an 'informal partnership' by the aforementioned Twomey, Paul Young and Tomm Moore in 1999, Cartoon Saloon first began with a number of shorts before branching into various series. Remember Skunk Fu!? That was one of theirs. In more recent years, you may have seen Puffin Rock on RTEJr, NickJr and/or Netflix – that's theirs, too. And there's more of that to come; as they edge closer to twenty years in business, they're now one of the main players in the Irish animation industry. Just last year, they announced Lighthouse Studios, a partnership with Canada's Mercury Filmworks that will focus on 2D animation for children and family-based television, creating 140 new jobs in the process.

They say the third time's a charm; we'll find out on March 4th whether 2018 is Cartoon Saloon's year. And if not, well... their fourth feature, the Tomm Moore-directed 'Wolfwalkers', is already in production. Either way, their Oscar nomination sends out an important message: it's not just the big studios that are capable of life-affirming animation. Pixar and their ilk are great, sure - but dig a little deeper and you'll find that fantasy stories about mythological sea-faring creatures, epic adventures entwined with Irish folklore or tales about young girls in war-torn countries are just as worthy of sharing the world stage.

The Breadwinner is released in Irish cinemas in May. 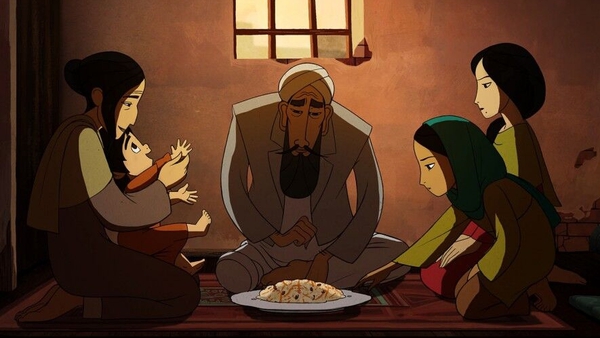