At midday every day this week, RTÉ lyric fm's Classical Daytime with Niall Carroll presents  A Christmas Postcard: The History of the Nativity Story, an inspired new series exploring the Christian story of the Nativity, through dramatisations of Biblical and medieval devotional texts, with documentary contributions and original music. Here, producer Conor O’Toole writes for Culture about the inspiration behind the project.

Listen to A Christmas Postcard - Episode 1 below:

In 2015, as part of the Cork Midsummer Festival, friends of mine, the Intersections Collective, staged what was termed an "immersive" performance of a show entitled Friars Walk at the Ennismore Meditation Centre in the city.

The piece had been adapted from a medieval travelogue written by an Irish Franciscan friar called Simon Semeonis (the part was played by Mark D’Aughton), who set off from Ireland with his fellow friar Hugo in 1323. Simon’s record of their travels across Europe - into modern-day Egypt and on to their final destination Jerusalem - is a vivid, sometimes heady, account of life in the Middle Ages, as they followed in the footsteps of the founder of their order, Saint Francis, and ultimately of Jesus. I think of the book as part The Travels of Marco Polo and part The Name of the Rose by Umberto Eco. The promised immersiveness in the performance was achieved through original music played live in the space by Cork composer Mark Wilkins, an historical interlocutor (Dr Chrissie Poulter of TCD School of Drama, also the Drama Director for the project) filling in background for the audience and a number of different "sensory" rooms employing water, sand, visual imagery and even mint tea and mandarin oranges to evoke the different stages of this medieval journey.

How to take the iconic nativity story and bring it to life for a radio audience?

The show made a lasting impression on me and I wasn’t alone in this by any means. Afterwards I approached Intersections about adapting the piece for radio with the same crew, using a combination of drama and documentary. In 2016, Friars Walk: A Medieval Pilgrim’s Journey premiered on UCC98.3FM and was later broadcast during the week before Christmas 2016 on RTÉ Lyric FM. The listener reaction was very positive and it occurred to us that a similarly-styled history of the Christian nativity story might also suit a Christmas week slot.

A Christmas Postcard has grown out of Friars Walk in many ways. Many of the core elements are the same – an original text or texts (in this case both the Bible nativity passages and the medieval Franciscan text Meditations on the Life of Christ were our starting points) enacted by Mark D’Aughton; an expert historical researcher/contributor (as with Friars Walk, Dr Malgorzata Krasnodebska of UCC School of History, Gosia to her friends, whose area of specialisation is medieval religious history and whose research brought Simon Semeonis’ previously underappreciated medieval record to light); and original music written specially for the piece by Mark Wilkins, generally played live as part of the dramatic action.

In A Christmas Postcard, we wanted to explore further how music underneath - or intruding into - text could bring to light the inner lives and emotions of the characters.

For this series, we had one particular concern in terms of that dramatic action. How to take the iconic nativity story and bring it to life for a radio audience? Part of the answer came through the suggestion by Mark Wilkins that we include Vicky Keating this time, a singer who has been a regular collaborator of Mark’s over the years. Her presence allowed us to give a voice to Mary in the Nativity story - who, even in the four Biblical nativity chapters, is largely a silent, or at least passive, figure - both literally, in the form of her words of prayer following the birth of her son in Episode 2, and figuratively, as a singing voice throughout the series giving expression to Mary’s inner life. More generally, the female voice also adds an important texture to the dramatic scenes and musical interludes, leading a chorus of male voices to hint at a presence beyond the earthly happenings of the text.

In the musical arrangements we were keen to try to capture not just the awe and reverence of the crib scene, but also the strangeness and eerieness, particularly of the prelude to the birth of Jesus. The percussion - gong and cymbals played with a lovely delicate touch by Trevor Kiely - was important in these sections to convey the sense of wonder at the heart of the text. After all, there are dream sequences, visions, celestial phenomena, the appearance of angels and "the multitude of the heavenly host". At other times, we used music to underline the bond between mother and child (Vicky’s hummed lullaby in Episode 2), or the intimate connection between two parents to be when Mark and Vicky engage in what is essentially a duet between Mary and Joseph at the opening of Episode 1. Or simply an atmosphere of communal rejoicing, as at the end of Episode 3 when the three kings set out for home having visited Jesus, Mary and Joseph in Bethlehem.

This incorporation of song, so that it is embedded in the drama and heightens the text in the process, was something we had used previously in Friars Walk. In A Christmas Postcard, we wanted to explore further how music underneath - or intruding into - text could bring to light the inner lives and emotions of the characters.

Classical Daytime with Niall Carroll presents A Christmas Postcard: The History of the Nativity Story, daily from the 18th-22nd December at 12 midday on RTÉ lyric fm. 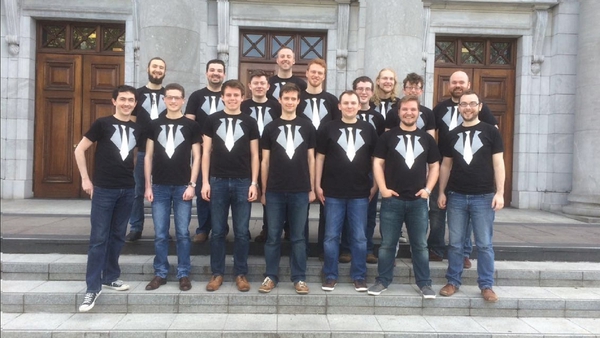