‘If I strip everything off, all the old arrangements, I mean there are no lyrics, just me and the piano... will there still be music in there?’

This was the beginning of Benny Andersson’s excursion into recording his new album, simply called Piano, a journey through some of Abba’s most famous songs.

"I had a long list of songs that I thought would be suitable for piano, I excluded all the songs that needed backing musicians, that needs a rhythm track so there’s no Dancing Queen or Waterloo… it wouldn’t do them justice to play them just on the piano so I had a list of forty, maybe fifty songs, and when we got through them like twenty, twenty-five songs, we thought 'Well that’s enough, we don’t need to do anymore because we can fill a CD with this.’"

Benny describes the album as being very homogenic, joking that it’s something

‘…you can play in the stables for the horses for calming them down.’

Leading him to talk about the race horses he owns, some of which he keeps here in Ireland.

At seventy years of age now, Benny Anderson has been involved in music since his teens and surprisingly even with all those hits under his belt, he is still amazed that there’s still such an interest in him and his music. This interest, he acknowledges, increased after the smash-hit Abba musical Mamma Mia.

Confirming that there’s a new Mamma Mia movie on the way featuring all the cast from the last movie (including Pierce Brosnan and Meryl Streep) and that some of the Abba tracks to be featured in this movie include I Wonder.., When I Kissed A Teacher and Kisses of Fire,’ He talks of how good Pierce Brosnan was in the first film - 'He’s good, he’s really good’ - and how much fun it was making the movie, in which he has a cameo as a piano player.

Benny explained that they’d all been around for a long time in the music world before winning the Eurovision Song Contest in 1974 but that this was a key moment for Abba:

"We all of a sudden realised that okay, we have an audience now that knows there’s a band up here in Sweden that can do good recordings, write songs, so we felt what we need to do now is to take care of that really well. Spend all the time that we need to create new music and record that."

It took a while for people to realise that they weren’t just a one-hit wonder and as Ray points out, with 380 million album sales behind them now, it’s safe to say they’ve proven that.

To listen back to the full interview between Ray and Benny, take a chance right here. 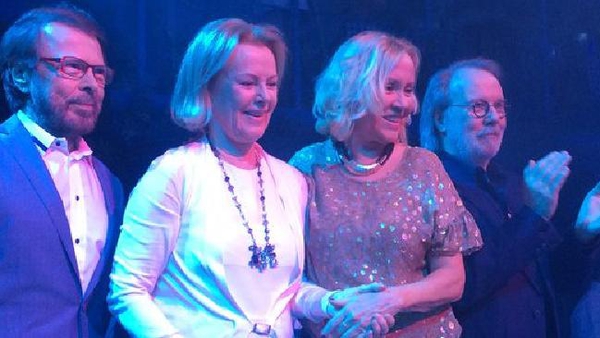