Analysis: what does Collins' penchant for keeping lists tell us about him, his life and his personality?

Lists held Michael Collins in their thrall. He wrote them all his adult life - especially, it seems, toward the end. What, if anything, does this activity tell us about him, his life and changing circumstances and about his personality?

A reputation for keeping lists has long shaped Collins's image. Some version of the target list, and with it a particular Collins, has come to us in story after story. Though he certainly co-authored such lists, these were not what we found when we began to read his diaries for what became our book Days in the Life: reading the Michael Collins diaries, 1918-1922.

From RTÉ News, Michael Collins diaries to be made available to public for first time

Above all in his diaries, we found daily 'to do' lists - or perhaps they are better thought of as daily 'getting done' lists. These made occasional appearances during 1918, 1919 and 1920. During those years, he wrote them on the pages of the commercial pocket diaries that helped him manage his days.

By 1922, what we call his diaries had largely become a series of these ‘getting done’ lists, recorded on the individual sheets of a notebook, which he turned into a diary by writing the date at the top. Each page, in turn, delineated an agenda for that day. These jobs required his attention, each one accorded, and emphasised with, a Roman numeral. This tendency toward the ‘getting done’ list – characterised by writing down and crossing through – gathered momentum during the Treaty negotiations of 1921, before becoming regular and then habitual.

Why did Collins seem compelled to list and why more frequently in 1922? On January 20th 1922, for example, the list, six items long, included meetings of the Provisional Government and Dáil cabinet, and with the Archbishop of Dublin and Stephen O'Mara, a trustee of Dáil Éireann's funds. The lists were then a way of remembering things, big but also small.

On March 20th 1922, there were eight items. He was in West Cork and his focus was local. James McCarthy, Main Street, Dunmanway, it seems, had 'Two horses taken on Monday night 13th March'. Collins noted a likely connection to a 'Boycott on him', which had something to do with ‘Tans & his daughter’. This was Collins’s way of taking the essentials of McCarthy’s story with him, ensuring that he asked the right questions when, later, he made a call, wrote a letter, or took some local commander by the elbow and drew him aside for a whispered conversation.

As Collins wrote on January 31st 1922, he and his colleagues were 'Taking over Generally' and the lists were a practical response to a new volume of work. Perhaps as importantly, he found he had become a campaigning public politician. He not only toured and spoke, but he was petitioned and lobbied. Lists became his way of managing representations, evidence of a diligent TD.

If these lists were a route to prioritisation, then the evidence for this is slim. The tasks on each succeeding list were those he had decided to address on that day, not the following day. On the other hand, it seems unlikely that on April 19th 1922, for example, ‘Kerry Blue Phil S’ was more important than ‘Mansion House Meeting 3 O’C today’, yet the Kerry Blue was I and the meeting II. Maybe Phil and the dog came first because they were a task for the morning, though other lists suggest that sometimes Collins recorded the jobs as they occurred to him or came to his notice.

From RTÉ Radio 1's The Business, Dr Darragh Gannon from UCD on the receipts and expensees which Michael Collins and other delegates collected during their trip to London to negotiate the Anglo-Irish Treaty in 1921

For some, a list is a form of procrastination and writing a thing down is a way of avoiding doing it. Collins was not like this. His lists were not stray thoughts gathered together for future contemplation, collections of maybes, soon-to-be regrets. They were, instead, a call to action. Usually, once put down, a task was addressed promptly and crossed out: done, done, and done. The rare item not struck through stood out.

Tasks tended not to pass from list to list, day to day. Nor did they disappear, shoved below the water, only to bob to the surface days or weeks later. Versions of 'Flat for Dan Breen' did recur on four occasions between May 3rd and 19th 1922. On each day, however, it had a line through it, suggesting that Collins had not deferred an unwelcome job. More likely, he tried several times to get that flat.

From RTÉ Radio 1's What It Says In The Papers, John S Doyle looks at how the newspapers reported Michael Collins' death in August 1921

When Collins noted 'Worked all Day Cleared all arrears' on October 15th 1921, he might have been expressing relief, or satisfaction, but the comment and the lists appear to be evidence of the organized mind of a determined man. Maybe too they suggest that he was just too sensible for grand plans, knowing that the route to achievement lay in describing and doing small tasks. ‘Create a new state’ is likely not much use on a ‘getting done’ list, and you don’t find it on any of his. Whereas ‘Diseases of Animals Act’, ‘Housing Scheme’, ‘Waterworks’, ‘Telegraphic System’, ‘Memo re Schools’ and ‘Educational Films’ just might get him somewhere.

But during trips to London in the spring of 1922, Collins wrote dispirited letters home to Kitty Kiernan. ‘These two days have been the worse [sic] I have ever spent’. ‘It would be so pleasant to be relieved of all responsibility’. There are just the lists in his diaries. There, he recorded the work, but not the peace of mind it cost, unless the lists were the very symptom of his distress, a bulwark built daily against being overwhelmed.

When the present and future were so uncertain, he may have found comfort in being clear, of a morning, about the particular things he wanted to do and in accounting for what he had done at the end of the day. Each item crossed out a bid for purpose and control when faced with the unravelling of dreams and friendships.

On August 5th 1922, Collins made a list (of five work tasks) and under that another. The second list included, amongst other items, 'Knickers', ‘White Collars’ and ‘Socks’. That morning the newspapers were full of the funeral of Harry Boland, but there was no mention in Collins’ diary of his friend’s death. There were, instead, just the lists. 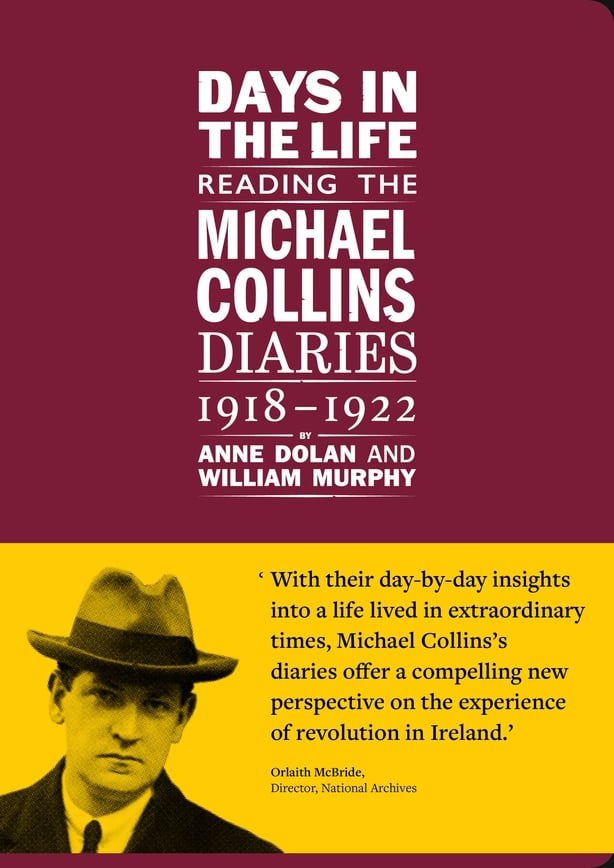 We might choose to read that as a callous silence, but Collins wrote of Boland’s loss and his own remorse in a more fitting place, in letters to Kitty. Maybe it is our assumptions about what those lists might mean that need to readjust. His diary isn’t silent nor is it unrevealing, rather those August pages hum with how he filled those harrowing days.

Days in the Life: reading the Michael Collins diaries, 1918-1922 by Anne Dolan and William Murphy is published by the Royal Irish Academy