Opinion: 'After creating multiple lists in Excel sheets, taking hundreds of photographs and travelling thousands of miles, I've had my say'

You can listen to a podcast of RTÉ 2fm's Game On presenter Marie Crowe talking to Siobhán Doyle about her new book above. You can subscribe to the Brainstorm podcast through Apple Podcasts, Stitcher, Spotify or wherever you get your podcasts.

Undertaking writing a book, especially when conducting the research completely from scratch requires a considerable commitment of time, effort and energy that often doesn't return the deserved reward. So why write a book in the first place?

Every non-fiction author sets out to find a topic that hasn’t been examined in detail yet, to create a new angle to a familiar story or to write their own personal memoir. A History of the GAA in 100 Objects is sort of a combination of all three. It looks at the GAA, a topic that’s written about by journalists on a daily basis and by historians on a regular basis, through a new angle, one of objects. The medals, jerseys and match day programmes are perhaps the most visible form of the GAA’s material culture. But there's also the invisible or less obvious reminders of Gaelic games: a referee’s report card, the Hawk-Eye camera, a letter from a manager to players. 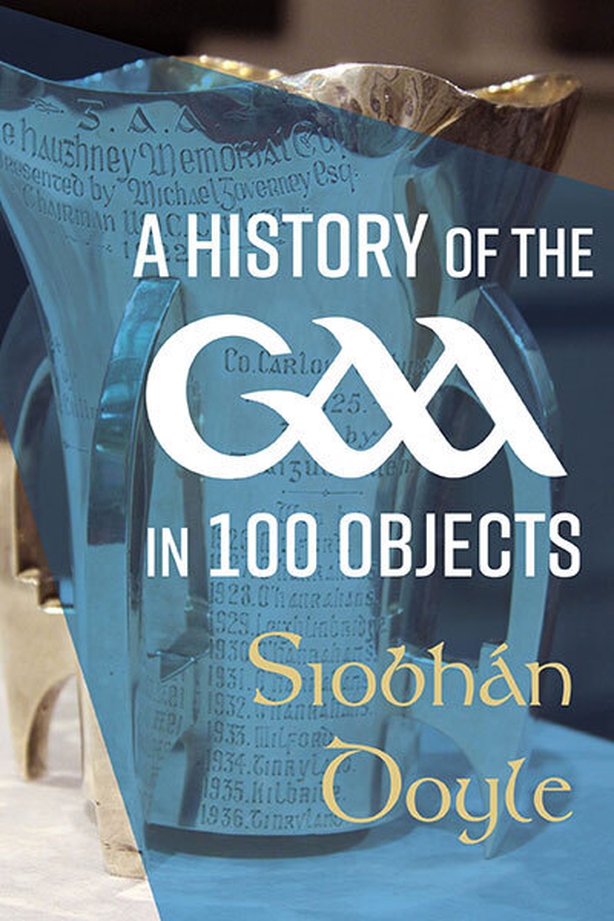 The introduction to the book is a description of the research process itself and my time travelling across the 32 counties to collect object stories. It's also a reflection of how my own background, childhood and profession has framed the research. Historians come to their research subjects with their own personal bias, conscious and unconscious. A History of the GAA in 100 Objects is no different.

The concept for this book occurred when I was conducting research on Bloody Sunday as part of the GAA’s centenary commemorative programme. In particular, I was examining the material culture of Bloody Sunday - the things that are left behind as remainders and reminders of the darkest day in the association’s history. These include Tom Hogan’s coat with a visible patch on the right shoulder indicating where the bullet damage was repaired after his death. He was the 14th and final victim from Croke Park on Bloody Sunday and he died in hospital on Friday November 26th aged 19 years.

From RTÉ Radio 1's Ray D'Arcy Show, Dr Siobhán Doyle on GAA schemozzles and her book, A History of the GAA in 100 Objects

While doing this often harrowing research, I realised that there has been no sustained research into objects of the GAA. And that was my 'Eureka’ moment. A History of the GAA in 50 Objects was my initial pitch to colleagues and to the eventual publisher, Merrion Press. However, it was evident that 50 objects wasn’t going to be enough to represent what I was bold enough to label as a history of the association. That would only allow room for one object from every county with 18 objects to spare so I doubled it to 100 objects.

So where do you start with a research project that has endless options and variations? Museums, as place-based organisations that allow for the interaction between memory and history, were an obvious starting point for me. Having studied and worked in museums for almost 10 years, I understand how they deliberately forge memories to prevent the natural erosion of memory, both personal and collective. In many ways, my book hopes to forge memories through objects that may have otherwise been overlooked or confined to private memories.

There are many 100 Objects books that have been written elsewhere which I used as templates of what I wanted to do. But I also learned what I didn’t want to do. For example, some of the books include photographs as objects themselves. I eliminated that idea immediately and used photographic images as supplements to the objects, as confirmation and context for the objects that I could put in my hands.

From RTÉ Brainstorm, podcast on the mighty world of GAA fashion, beards and championship haircuts

The objects in A History of the World in 100 Objects by Neil MacGregor stretch back two million years with the objective to reveal who we are by looking at what we have made. The GAA was established in 1884 which meant a more manageable timescale in place for the object stories that I would be sourcing. That said, a couple of objects predate the formal establishment of the association such as the hurling ball made of cow and horse hair from the 15th century.

A History of Ireland in 100 Objects has been a hugely successful project by Fintan O'Toole and the Royal Irish Academy. It has become a series of stamps, a standalone website and has been linked with the educational curriculum, each of which ensures its longevity as an important historical project. That there have been 100 object projects within the Irish context which have proved successful among the wider public gave me great encouragement and reassurance when embarking on my research.

The research is not complete. It probably never will be, as there will always be stories and objects emerging to add to the GAA's rich history

In sporting terms, The World Cup in 100 Objects, A History of American Sport in 100 Objects and A History of European Football in 100 Objects were all consulted as I tried to work out my aims for examining the GAA context. What links all of these projects, including my own, is not simply gathering facts to tell a story but using objects to frame that history. Telling history through objects is a very deliberate choice.

The benefit of writing a ‘100 objects approach’ is that there’s no long chapters to get bogged down by. Instead, it’s a series of short essays of approximately 300 words each, meaning that each time I sat down to write, it was on a different topic. The research is not complete. It probably never will be as there will always be stories and objects emerging to add to the rich history of the GAA. But after creating multiple lists in Excel sheets, taking hundreds of photographs and travelling thousands of miles, I’ve had my say.