Most Irish cities are coastal, with 40% of the population within 5km of the coast. Recent flooding reinforces the need to understand how sea levels are changing around Ireland. Galway has become the place to be for journalists reporting on impending rough weather of late and we have become familiar with images of waves reaching forgotten cars on Salthill prom.

Future sea levels around the Irish coast depend on a combination of global and local factors. Global sea level rise is driven by climate change with another 1m of sea level rise predicted by 2150, if greenhouse gas reductions fall short of targets. However, new research has shown sea level rise in Dublin and Cork greater than expected from climate change alone, pointing to local exacerbating factors that need to be understood. 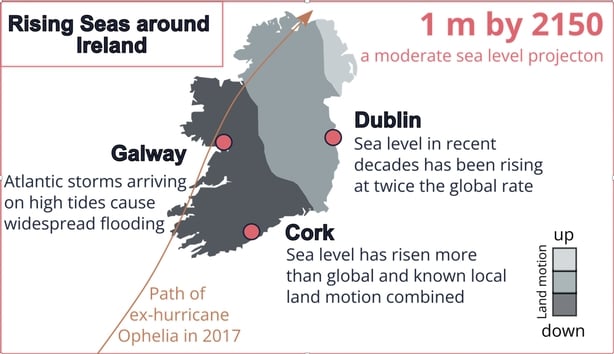 In October 2017 the nation braced itself for the arrival of ex-hurricane Ophelia. The tightly wound tropical-esque storm was a contrast to the looser cyclones that traditionally lash the west coast. When Ophelia hit, the winds rose, as did the seas. Waves and storm surged along the west coast, flooding Galway. The level the seas rise to above that of the regular tide is called storm surge and Ophelia was the largest storm surge recorded by modern measurements in Galway at 1.6 m above the tide.

Galway is the textbook case for coastal flooding in Ireland: the biggest storms lead to the biggest surges, which subsequently have a high impact on a city built by the Atlantic's edge. High sea levels at the coast are a combination of factors: not only storm surges but also the tide.

While Ophelia was the highest storm surge, it was not the highest total sea level. That honour goes to Storm Eleanor that hit in early January 2018, when water levels in Galway rose to 3.7 m as the storm surge coincided with spring tides. For context, this is about 1 m above the base of the famous Spanish Arch in the city. The resultant flooding from Storm Eleanor was severe throughout the city.

From RTÉ Radio 1's Morning Ireland in 2018, Cian McCormack reports from Galway city, which suffered severe flooding as Storm Eleanor swept in off the Atlantic

The study compared sea level records for Dublin with other Irish and international records. The Dublin record had in recent years been viewed sceptically due to questions about data quality. In response to this, the Dublin record was calibrated by adjusting biased high water measurements that affect the overall calculation of average sea level. The confirmation of high rates of sea level rise—already built into Dublin's climate action plan—does not yet unearth the cause of this rapid rise.

Unusually high sea level rise in Ireland is not the preserve of the capital. A 2021 study in the journal Ocean Science looked at sea level rise in Cork since 1842 and found that relative sea levels had risen by over 40 cm, nearly 50% more than the 27 cm expected for the region.

From RTÉ Archives, Carole Coleman reports for RTÉ News in 1997 on a project to enable meteorologists and scientists to predict where floods will occur across Ireland

Higher rates of relative sea level rise are expected in the southwest of Ireland due to Glacial Isostatic Adjustment whereby the removal of large ice sheets that covered Ireland during the last ice age causes land subsidence in the southwest and land uplift in the northeast of Ireland. However, models of this effect still leave nearly 20% of sea level rise in Cork unaccounted for. This could be due to local subsidence in Cork Harbour due to manmade or natural factors, or a wider signal of subsidence along the northwest European shelf, or the models for Glacial Isostatic Adjustment could be inaccurate.

These two reports point to an important question for both Cork and Dublin: what are the local factors causing higher than expected sea level rise? Understanding this is key to adjust future climate projections of sea level rise for use in local adaptation.

In the future, tides will continue to rise and fall in line with the orbits of the celestial bodies. The future of storms remains uncertain, but the critical future factor will be mean or average sea level. This will rise as the oceans swell with meltwater from land ice, such as glaciers and the Greenland and Antarctic ice sheets, and as seawater expands due to warming. While warming waters were the largest single factor in sea level rise in the 20th century, melting land ice is likely to be largest single factor entering the 21st century.

From RTÉ Six One News, flooding in Cork as Storm Barra hits in December 2021

The 2021 Intergovernmental panel for Climate change report estimates a 1m sea level rise by 2150 under a moderate greenhouse gas trajectory. This would put the floodline of another Storm Eleanor at 2m above the base of the Spanish Arch in Galway. The arch that survived the Lisbon tsunami of 1755 has seen extreme seas before, but the devastation to homes, businesses and places of historical, cultural and personal significance will be severe if this scenario comes to pass.

The estimate of 1m of sea level rise by 2150 will differ depending on the future trajectories of greenhouse gas emissions. These are described by socioeconomic pathways and range from a sea level rise prediction based on a 'green world’, up to the scenario that fossil fuel exploitation and usage was to dramatically increase.

Due to the actions being taken globally and locally on climate action, sea level rise based on the highest emission scenario is unlikely. In order to reach that level, high fossil fuel development worldwide throughout the 21st century would be required, whereas action taken to reduce greenhouse gas emissions has thankfully already begun.

From RTÉ Radio 1's Today with Sean O'Rourke in 2019, Prof Peter Thorne from Maynooth University on how Dublin and other coastal cities face devastating floods due to rising sea levels

However, we would also not put forward the ‘green world’ lowest emission scenario. This would require global emissions to be cut to net zero by 2050, while Ireland and many other countries have not met their pledges on emissions to date. It was found that Ireland was only 7% below 2005 levels despite pledging to be 20% below 2005 levels by the year 2020.

As a result, we consider sea level projections associated with a moderate greenhouse gas trajectory (known as SSP2-4.5) to best represent our current trajectory. This future is yet to be written, though, and better understanding of changing local Irish sea levels that allows effective adaptation in concert with action on climate change will effectively lower the line of future sea level.