Analysis: historians have uncovered many supernatural stories from Ireland's revolutionary years which were previously overlooked

Throughout history and across cultures worldwide, paranormal experiences have been and continue to be reported by people of all walks of life. Those who lived through and fought in the Easter Rising, the War of Independence and the Civil War are no exception.

Understandably, most of the historical discussion on the Irish revolution for the past century has centred around its political and military dimensions. But historians in recent years have been uncovering a variety of supernatural stories which had previously been overlooked.

From RTÉ Archives, 1964 interview with Seán Mac Eoin for the TV series The Survirors about various events during the War of Independence

Thinking the lights were a convoy of British reinforcements attempting to encircle them, Mac Eoin and his men stealthily made their way through the bog to escape, only to discover 'that what we had thought was an encircling army was nothing other than "will-o-the-wisp" over that three-mile stretch of moor and bogland. It was my first experience of this extraordinary phenomenon…it was both disconcerting and terrifying.'

Other paranormal incidents would draw even wider attention. During the conscription crisis of 1918, panic was spreading throughout Co Roscommon. Commandant-General Ernie O'Malley and North Roscommon Brigade IRA quartermaster Patrick Mullooly described how the townlands surrounding Kiltrustan were consumed by fears of a gigantic black pig. This pig was the spirit of a shapeshifting druid originally banished by St. Patrick; its reappearance was an omen signifying the fulfillment of the ''prophecies’’ of St. Columcille, prophecies of sectarian slaughter and the overthrow of the British.

O’Malley later wrote that "a man near Strokestown told me of the Pig. Words went away from him as he stumbled in description "…as big as a house. Man, dear, and a back…God help us…I wouldn’t be seen near the place for all the gold in the Bank of Ireland…take my advice, now, like a good gossoon and don’t meddle with it."’ This pig was seen emerging out of a crack in the ground near the rectory of Kiltrustan, sending local schoolchildren into a panic.

In the days following this incident, hundreds of people came from far and wide hoping to see this pig, including O'Malley. He had heard rumours that the pig could be summoned by calling for it thrice, so he approached the haunted rectory at midnight in a brave attempt to confront the eldritch beast.

'I was nervous enough, even though I put my hand a few times to the handle of my .38…At twelve o’clock I shouted: "Come forth." Silence. "Come forth," then a pause. I heard my own voice when it had gone away. "Come forth," but no ridge of spines or yellow eyes came out to frighten me.’

Though only children seemed to be able to see the pig, the panic and prophetic fervour surrounding it presaged the War of Independence, which began less than a year later at Soloheadbeg.

Many of those involved in the conflict would later recall strange experiences of precognition, what Eamon Broy described as a 'seventh-sense', such as premonitions, dreams and even telepathy. Grace Plunkett (neé Gifford), whose marriage to the martyred Joseph Plunkett on the eve of his execution has been immortalised in the popular ballad "Grace", wrote of her telepathic connection with Joseph, and the "unseen force" which pulled her from her bed and guided her to Kilmainham Gaol before she had any knowledge of his execution.

From RTÉ Archives, interview with Fiona Plunkett for the 1966 TV series Portraits 1916 about her brother Joseph's wedding to Grace Gifford in Kilmainham Gaol hours before his execution

In their statements to the Bureau of Military History, volunteers John C. King, Edward Brennan and Patrick Moylett reported having dreams which presaged coming events and that these dreams would save them from capture and mortal danger. Similarly, other members of the IRA such as Michael Lynch, John J. O'Brien and Michael Davern would describe strange instinctual premonitions of impending raids by the Black and Tans, premonitions which preserved them from death and imprisonment.

In the years after the Irish revolution, the ghosts of those killed during the conflict continued to haunt the land. In his recent book The Time of the Tans, Tomás Mac Conmara has identified several reports of a spectral uniformed figure seen patrolling roads near Lahinch in Co. Clare, ostensibly the ghost of a Black and Tan killed during the conflict. One informant to the school's folklore collection even provided a sketch of this apparition in 1938 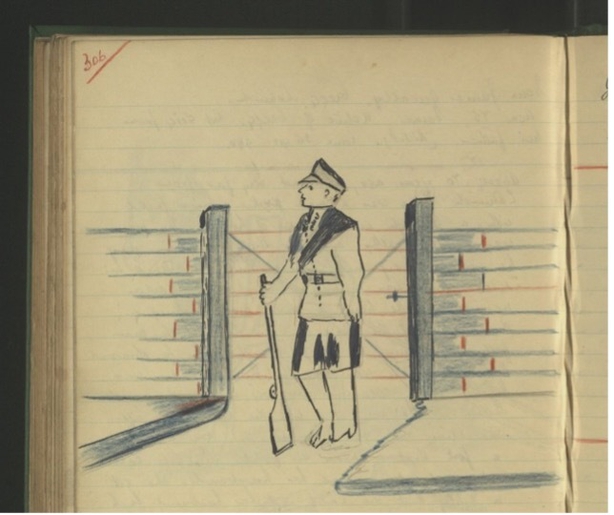 These stories highlight the visceral terror of the Irish revolution, showing us echoes of what it felt like to have the shadow of a violent and untimely death lurking over one's shoulder. It shows the unnerving fear of an unexpected 2am knock on the door, when you or your loved ones might be dragged from your home by a gang of armed men and sheared, tortured or summarily executed.

While people living in Ireland today might fear a nuclear Armageddon unimaginable to the revolutionary generation, the revolutionaries feared an apocalypse altogether more intimate; the betrayal of a neighbour, a life where being in the wrong place at the wrong time could lead to being murdered in the name of empire or republic. Their stories of the paranormal preserve an aspect of that primal fear that most military histories have so far failed to convey.

Benjamin Ragan is a doctoral candidate and departmental assistant in the Department of History at Mary Immaculate College Limerick who studies the history of the supernatural in the context of Anglo-Irish conflict.