Analysis: European energy needs have helped create an opportunity for Vladimir Putin which he has now exploited

In response to Russia's invasion of eastern Ukraine, the German chancellor, Olaf Scholz, announced that Germany has suspended certification of the new Nord Stream 2 gas pipeline between his country and that of Vladimir Putin. The fast-moving crisis in Ukraine throws into sharp relief the fissures that threaten European and transatlantic unity. Nowhere are these tensions more visible than in how countries are approaching their energy needs.

Nord Stream 2, which will bypass Ukraine by carrying gas under the Baltic Sea – and more broadly Europe's demand for gas at a time of exceptionally high energy prices – is not a primary reason for the Ukraine crisis but it is a contributing factor. The pipeline has meant Germany and the US have not been in full agreement on how to respond to Russia, with the US stating that an invasion would bring an end to the pipeline. 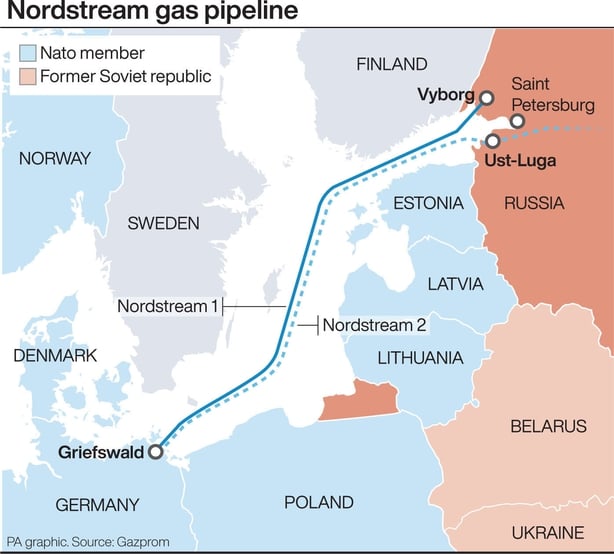 Permanently cancelling the pipeline is a much bigger decision to take now than before construction and one that all the nations due to be supplied with the gas it is set to carry – Czech Republic, Austria and Italy, as well as Germany – will carefully consider. Even Germany's current suspension may prove temporary should the west come to an agreement with Russia.

This has made a unified transatlantic and Europe-wide response uncertain and helped create an opportunity for Vladimir Putin that he has now exploited. Quite how durable transatlantic unity in the face of this new challenge proves to be could foretell the strength of Nato and the EU in the years to come.

Estonia, Latvia, Lithuania, Poland and non-Nato/EU member Ukraine, which do not stand to benefit from the new pipeline, have opposed it for years. The way Poland has been left out of the deal has led it to compare both Nord Stream connections to the 1939 Molotov-Ribentrop non-aggression pact between Nazi Germany and the USSR that divided Poland between them.

From RTÉ Radio 1's News At One, analysis of the energy implications of Russia's war on Ukraine from Kevin McPartlan (Fuels for Ireland), reporter Fiachra O'Cionnaith, Marcel Dirsus (Institute of Security Policy at Kiel University in Germany) and Naomi O Leary (Europe correspondent for the Irish Times)

France's position has been more ambiguous. The French president, Emmanuel Macron, has cautioned that the pipeline should not increase Europe's reliance on Russian gas. French energy minister Bruno Le Maire, however, recently criticised the idea of cancelling it.

Germany's energy policy is crucial here. The country is pursuing aggressive carbon-reduction targets, while also phasing out nuclear power production. As a result, Germany is investing tens of billions of euros in renewable energy. Solar and wind power remain, however, reliant on fossil fuels – coal, oil and natural gas – to compensate for cloudy or calm periods. German clean energy policy dictates that natural gas be the favoured choice.

One third of Germany's gas already comes from Russia. It planned to rely on Nord Stream 2, which doubles the original capacity of Nord Stream 1, for additional capacity. Instead, Germany is now taking up the US's offer of American natural gas.

From RTÉ Six One news, Taoiseach says sanctions against Russia will hit hard

Berlin taking Nord Stream 2 out of play is among the most serious sanctions yet against Russia. Halting the pipeline impacts the Kremlin on a financial level. New energy sanctions, unlike those extant sanctions against individuals and Russian state-owned enterprises, may have come as a surprise.

Should Russia find these sanctions credible, they may prove more efficient in affecting Russian foreign policy. The White House and European leaders appear to be avoiding other sanctions that would hit the heart of Russia's financial system, presumably leaving these for a full-scale invasion.

Germany has stood out in recent years in its reluctance to penalise Russia. It has declined to send weapons to Ukraine – and has forbidden Estonia from sending any German-built heavy artillery it owns – citing German law.

Critics have accused the country of using its constitution as a pretext for putting energy needs ahead of treaty obligations and European unity. They suggest German actions and rhetoric have already shaken the faith of the country's partners in central Europe.

READ: What happens in Ireland if Russia turns off the gas supply?

Scholz's party, the Social Democrats, has long called for improved relations with Russia. The chief of the German navy resigned in January 2022 after suggesting that Russia was a natural ally for Germany to balance against a rising China.

Such a statement from a high-ranking official goes against official German foreign policy and foments suspicion and distrust of the country's intent within European institutions. Newer EU and Nato members may, understandably, wonder how Germany will react to future crises.

Matthew Christopher Kolasa is a PhD Researcher in International Relations at the University of St Andrew. This article was originally published by The Conversation.